Suresh Prabhu is by no means breaking new ground. He is merely mouthing the same promise made time and again, but never fulfilled, by his predecessors 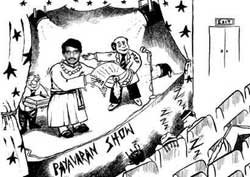 suresh prabhu , the Union minister for environment and forests, has declared that his ministry is all set to enact the National Biodiversity Act. "It is now imperative to do so because India has signed the International Biodiversity Convention and outsiders cannot be denied access to the wealth of India's biological resources," he is quoted as saying in a recent press statement. Perhaps to prove that he and his colleagues at the Ministry of Environment and Forests ( mef) are in right earnest, Prabhu has mentioned that a "draft of the proposed Biodiversity Act is being circulated among academicians, non-governmental organisations and practitioners so that it can take care of the interests of all the stakeholders."

Prabhu obviously has not been properly briefed by his advisers at Paryavaran Bhavan. He is not aware that India initiated the global treaty on biodiversity in June, 1992 and, since then, all his predecessors -- from Kamal Nath to Jai Narain Nishad to Saifuddin Soz -- have made the same promise several times during their respective tenures. It is another matter that none of them has fulfilled the promise. There is nothing new in what Prabhu is saying. He is merely mouthing the statement that the long-suffering "stakeholders" have by now grown tired of.

The Union minister seems to be uninformed on another front too. This Act, if it does come through (the more optimistic stakeholders are keeping their fingers firmly crossed), will certainly not be the "first of its kind in the world". Several countries have beaten India to it. In May 1995, the Philippines came up with a presidential executive order setting the guidelines for access to genetic resources within its territory. On 17 July, 1996, the Andean Pact Common System on Access to Genetic Resources was forged by five Latin American countries -- Peru, Ecuador, Bolivia, Venezuela and Colombia. Each of them had to come up with an individual legislation prior to signing the common pact. Ecuador has already completed the blueprint and the others are reportedly giving finishing touches to their drafts. Brazil and Fiji presented their draft bills in an international forum in November 1996. As far back as 1994, Australia set up the Commonwealth nations' working group to establish a national system for managing its biodiversity. Costa Rica came up with a national biodiversity law in early June this year. Therefore, India, and Suresh Prabhu, are definitely lagging far behind.

It seems that his advisers have forgotten to inform the minister that the present proposal is almost identical to the report that was produced by the mef in October, 1997, during Saifuddin Soz's tenure as environment minister which drew criticism from all quarters. Academicians, environmentalists, and scientists proposed various changes which the mef officials solemnly promised to accommodate in the final version.

Now, after eight months, they have made a few superficial changes and sent back the same document asking for some more comments. Enterprising bureaucrats may be of the opinion that they can convince people that they are not sleeping over the biodiversity law if they keep circulating a document titled "Draft Outline of the Biodiversity Act" every six months, even if the content of these myriad drafts essentially remain the same.

Prabhu is also confused about the reasons why this law is urgently needed in India. It is certainly not because the International Biodiversity Convention lets "outsiders" loose on our bioresources. On the contrary, it endows the member nations sovereign rights over genetic resources found within their territories and states that any external party desiring to access these resources must acquire prior consent from the concerned nation. However, to begin with, the signatories must come up with a biodiversity legislation at home. So by delaying the enactment of this law, the government is wasting precious time.

The actual losers are the traditional communities who have knowledge related to the use of the bioresources, which are now in great demand for commercial purposes, both in India and abroad. Genetic resources spell big business in the global market today. However, these indigenous communities are being deprived of their share of profits because the government has till now failed to put in place a law that establishes its right over these assets.

The future looks bleak too. The draft, which keeps bouncing back to the stakeholders, does not define the role of the indigenous communities in the process of conservation, management of biological resources and knowledge systems. It makes no attempt to include them in the decision-making process. All powers have been conferred upon the National Biodiversity Authority, which will be monitored and controlled by the Central government with half of its members coming from various government departments. In other words, its sole purpose seems to be to strengthen the Centre's stranglehold over bioresources.

This draft is particularly unpalatable because it comes immediately after the Fourth Conference of Parties (cop) and the Convention on Biological Diversity(cbd) held in Bratislava, Slovakia, in May this year. Here, 172 nations, including India, all signatories to the CBD, took some significant decisions on Article 8j of the Convention. Article 8j highlights the importance of the role played by the traditional communities in conservation and use of bioresources. In Bratislava, the convention decided to "promote consultations" with the local people on issues related to conservation and commercialisation of genetic resources. Member states were asked to produce case studies showing "the extent to which traditional knowledge of indigenous and local communities has been incorporated into development and resource-management decision-making processes."

The Indian government was a party to this pledge. Prabhu himself led the delegation that went to Bratislava. But how serious is he about the commitments he made? The pro-people approach is in no way reflected in the present draft. This draft seems to assume that all bioresources are commodities that lie within the fiefdom of the Central government, and not assets that belong to the people.

It takes a purely negative stand on the issue of commercialisation of resources. There is, of course, the threat of over-exploitation and erosion of genetic materials if the industry using these as raw materials is allowed to act unchecked. Proper checks and balances must be put in place to prevent indiscriminate harvesting. But along with this, a system which encourages the corporate sector to join in the conservation efforts and sets up easily identifiable channels through which it can interact with the local communities has to be created. The draft assumes a blatantly prohibitive tone. This will only encourage industry to carry on collecting what it needs on the sly, even if it means using unsustainable methods.

The draft shuts out the commercial sector altogether. It does not even call upon industries to contribute to the national biodiversity fund. This again is in direct contradiction to what transpired in Bratislava. In a high-powered ministerial meeting held during the conference, the government representatives deliberated on the ways in which the private sector could be involved in the business of conservation. Interestingly, it was Prabhu who chaired the session and even made some useful suggestions on the need to impose a "voluntary code of ethics" on the industries using bioresources. At the close of the Bratislava meet, the participants took a decision to "invite the private sector to support efforts by governments to develop and promote legislative or administrative measures, policies and programmes which facilitate the distribution of benefits arising from the use of genetic resources."

However, the draft proves that Prabhu obviously does not believe in practising at home what he preaches in the international arena.

It is obvious that the ministry, while drafting the Act, has chosen to ignore all the relevant issues that have been raised at the national and international fora in the last eight months. The document remains dotted with loopholes and can, under no circumstances, lead to a strong piece of legislation. Suresh Prabhu, are you listening?