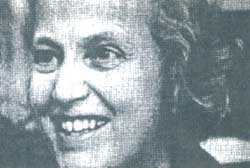 Dorothy Crowfoot Hodgkin is dead. Just for the record, Hodgkin was Britain's only surviving woman Nobel laureate till arthritis claimed her on July 31 at the age of 84. One of brightest crystallographers of her time, Hodgkin earned renown for unravelling the molecular structure of penicillin, insulin and vitamin B12.

Unfortunately, popular memory has always given short shrift to women scientists. Indeed, with the lone exception of Marie Curie, other woman Nobel laureates -- the French chemist Irene Joliot Curie, the German physicist Maria Goeppert-Mayer, and the Italian brain scientist Rita Levi-Montalcini -- are as good as foegotten.

Born on May 12, 1910, in Cairo, Hodgkin did her schooling at Sir John Leman School in Beccles, Suffolk, England. She graduated with distinction in chemistry. It was when she was 15 years old and in Sudan, where her father was posted, that her life-long fascination with chemistry began. A scientist presented her a chemistry set which she used to set up a mini-laboratory and experimented with the plants she had collected.
In the autumn of 1928, she enrolled herself in Somerville College at Oxford University. Those were days when it was considered extremely unusual for a woman to take up the sciences. But Hodgkin persevered and specialised in X-ray crystallography, a technique used to reveal the atomic structure of crystals.

The idea was pioneered by the Nobel prize-winning father-and-son team of William and Lawrence Bragg in 1932. They unlocked the simple cubic structure of common salt crystals by passing X-rays through them and noting the diffraction pattern. While the experiments were simple enough, the analysis of the patterns demanded hard work.

With the advent of computers in the early '50s, it became easier to handle the complex mathematics involved in determining the crystalline structure. In fact, were it not for computers, Hodgkin's most ambitious project -- finding the structure of insulin, which contains more than 800 atoms -- would have taken far longer. It was accomplished in 1969.

For most of the war years, Hodgkin concentrated on finding the structure of penicillin and in 1945 she elucidated its structure before it had been deduced by purely chemical methods. Then, in 1956, she determined the structure of vitamin B12, a complex molecule which contains more than 90 atoms. At the time, this was considered to be the high-point of X-ray diffraction analysis.
Hodgkin had a very unconventional academic career. Not only did she attain her PhD much later, but she also did her Nobel-prize winning work as an independent scientist. She never received more than nominal funds from the academic establishment and had nothing to do with the normal academic process of working in a team under a supervisory professor. After a brief sojourn in Cambridge, where she worked with the eminent X-ray crystallographer, J D Bernal, she was on her own. She married Thomas Hodgkin, an expert on African affairs, in 1937.

Hodgkin developed arthritis in the early '50s and the labour-intensive nature of her work forced her to retire from practical research in the '60s. In 1960, Hodgkin was made a Royal Society Wolfson Research Professor. She was made a Fellow of the Royal Society in 1947 and won the Nobel Prize for chemistry in 1964. She was also awarded the prestigious Lomonosov Gold Medal of the Soviet Academy of Sciences in 1983.

After her retirement, she became a prominent worker for international peace and understanding -- between 1976 and 1988, she presided over regular Pugwash conferences, where scientists discuss major problems confronting the world. In 1965, she became the first woman since Florence Nightingale to be awarded the Order of Merit, and 20 years later, her portrait joined the select band of scientists in the National Portrait Gallery in London.

Hodgkin may not find a permanent place in public memory, but her extraordinary life will continue to inspire women to take up the sciences and perform as well as their male counterparts.