The Calcutta tramcar system, perhaps the only eco-friendly feature in the city's ruined landscape, is heading towards extinction 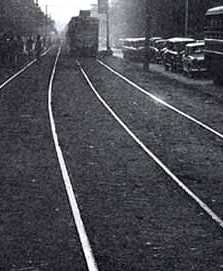 CALCUTTA is moving backwards. Blessed with a benign tramway system -- a century-old system that is now being seen as a radical solution to traffic snarls and smog -- that has stood the test of urban chaos, it ought by rights to have been expanded and fortified. Instead, the West Bengal government is busy derailing it.

Perhaps the worst planning decision taken in recent memory by city authorities is the phasing out of the Calcutta Tramways Company (CTC). The government apparently can't handle the "unbearable subsidy", and is replacing the bell-ringing fleet by buses, a move which is being opposed by many scientific and socio-economic bodies.


The greatest economic viability of a tram is that it has a serviceable life of 60-70 years compared to 4-5 years of a bus in India. Cities like New Orleans and San Francisco in the US, and many Third World countries like Brazil, China and the Philippines have adopted tramways and made a budgetary killing. In Manila, a 15 km double-line elevated system runs over the city's main arterial road. Not only do its advantages far exceed the installation costs, but citizens get charming rides as a bonus.

The problem with getting rid of an "antiquated" MRTS system is that any replacement will invariably hike up the air and noise pollution that terrorises almost everyone in Calcutta. The effects of air pollution are often imperceptibly slow and cankerous. There is, for instance, no method of calculating the "fatigue effect" of carbon monoxide or the degree of mental retardation of a child from this kind of exposure. At its best, the 84-decibel roar of normal vehicular traffic is also much higher than levels deemed tolerable.

Says D A Tibke, principal planning officer of Manchester tramways in the UK, ""If Calcutta was in the UK, we would be trying to work out the disbenefits of abandoning trams -- especially the disbenefits of increased car use. We would also take into account the savings in the medical costs of looking after children and others suffering from pollution." Modern town planners and Greenpeace activists take the case further: they say that small vehicles like two-wheelers, cars and even minibuses should be banned in densely populated cities. These vehicles occupy more road and parking space, creating traffic congestion, and consume an inordinate amount of fuel compared to their utility.

As an excuse to dismantle CTC, authorities highlight the financial losses in tramcar operations but remain silent on the issue of cost benefits. Today, less than 120 tramcars, out of an installed capacity of about 400, ply the roads. How can high returns be expected when cars stay put in sheds? Moreover, CTC is weighed down with a surplus staff of about 4,000.

Comparing the Calcutta State Transport Corporation (CSTC) with CTC, as the authorities are wont to do, has built-in fallacies. First, CSTC depends on the central subsidy on diesel while CTC gets electricity at market rates. Second, CTC charges 10-20 per cent less than standard bus fares. The subsidy per passenger for CTC comes to 69 paise, compared to 72 paise for CSTC. And CTC's cumulative loss in 1991, at Rs 121 crore, is a third of CSTC's Rs 343 crore.

It is also an open fact that a tramway is far better protected against corruption than a busway. There is no scope for fiddling with electricity consumption, as there is with diesel. The spare parts of a tram cannot be sold since there is no parallel market.

The only financial fillip that CTC has received after Independence is Rs 108 crore in the '80s from the World Bank. Experts feel that if this money had been properly utilised, CTC could have been set back on track. Not a paisa has been invested in the past few years to replace wornout tracks or traction wires. The result is that the tramcars stall in the middle of traffic that is chaotic at its best; and the overhead wires often snap, endangering people on the roads. Further, the non-rationalisation of volume-based timing and the closure of trunk routes, and irregular service seem to have been intentionally encouraged to pile up losses to the system.

It also appears that for some reason the government was, till recently, more interested in subsidising CTC than making it more functional. What it could have done is diversified CTC's activities with the help of electric trolley buses. The CTC's workshop at Nonapukur not only has the capacity to manufacture trolley buses but can also export them at viable cost.

And CTC has no dearth of operational turf: it has 23 depots and sub-depots situated in the heart of the city. These spacious lands, valued at Rs 700 crore, were purchased between 1900-1940. The city authorities now plan to sell or lease them to private business promoters to meet the hand-to-mouth expenditures of the company. If CTC is abolished, property worth about Rs 1,200 crore will be irretrievably deployed for other purposes, leaving no scope for ever re-establishing a tramway. Meanwhile, the city can come to a standstill.

Debasish Bhattacharya is associated with the Division of Protein Engineering, Indian Institute of Chemical Biology, Calcutta.