A complement, not a substitute

Cash transfer is effective only if basic services are in place

There is a good deal of ill-informed enthusiasm about “conditional cash transfers” (CCT) among Indian policy makers, based on a superficial understanding of the Latin American experience. In Mexico, Brazil, and other pioneers of this approach, conditional cash transfers were developed to bring a fringe of poor households into the fold of health and education services, which were not being utilised by these households for various reasons.

I am not questioning the potential effectiveness of CCTs in their limited capacity as an incentive. However, a note has to be taken of other features of CCT in Latin America. First, their programmes are aimed at a smaller chunk of the population, usually the rural sector which is excluded from education and health care. This section is easy to identify in Latin America. In India, though, a much larger chunk of the population is in dire need of social support, and the experience with “targeting” of poor households is quite sobering. 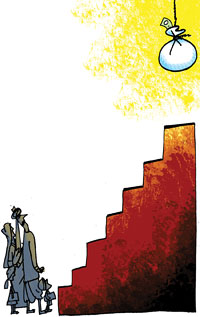 Second, CCTs in Latin America are seen as a complement, rather than a substitute, for public provisions of health, education and other basic services. The incentives work because the services are there in the first place. In India, basic services like health are still missing to a large extent, and CCTs are no substitute.

An illusion has developed in some quarters that CCTs can replace public facilities by enabling recipients to buy health and education services from private providers. This is not how conditional cash transfers work in Brazil or Mexico. Third, while CCTs have contributed to health and education, they have had limited applications in the field of food security.

A wholesale replacement of India’s Public Distribution System (PDS) by CCTs cannot be justified from available experience. A nuanced approach is required to the design of social security transfers. CCTs are useful in some circumstances, specially scholarships. In other situations, there is a case for unconditional cash transfers that include pensions for widows and the elderly. Conditional transfers in kind, like midday meals in primary schools, also have a role to play. Finally, there is a place for unconditional transfer in kind—the PDS.

A wholesale transition from the PDS to cash transfers in rural India would be misguided and premature. For the poor, food rations have many advantages over cash transfers. First, they are inflationproof, unlike cash transfers that can be eroded by local price hikes, even if they are indexed to the general price level. Second, food tends to be consumed more wisely and sparingly; cash can easily be “blown up”. Third, food is shared equitably within the family, while cash can be appropriated by its powerful members. Fourth, the PDS network has a much wider reach than the banking system.

In remote areas where the need for income support is the greatest, the banking system is simply not ready for mass transfers in cash. Last but not least, cash transfers are likely to bring in their trail predatory commercial interests and exploitative elements, eager to sell alcohol, branded products, fake insurance policies or other items that would contribute very little to people’s nutrition or well-being.

Of course, cash transfers have advantages too: they have lower transaction costs, more convenient for migrant labour, and might be easier to monitor. Sometime in the future, when the banking system has a wider reach and a more ambitious social security system is developed, with large income transfers that cannot be made in grain (because people can only consume so much of it), a cautious transition to cash transfers may be advisable. But this future is quite distant still, and for the time being, food is the best.