Twenty billion tonnes of concrete is produced in a year. It's the most widely produced human-made material on earth. Concrete forms when cement is mixed with water, sand and aggregates at room temperature. Technically it is a plastic, which means it flows under stress. This feature, called concrete creep, eventually deteriorates the durability and truncates the lifespan of concrete structures.

Scientists have recently identified what causes concrete to creep the rearrangement of particles at the nano scale. Rethinking concrete engineering from this perspective could result in lighter, stronger and durable concrete.

Like any solid material, concrete deforms under sustained stress. Once the stress is removed concrete rebounds like a chewing gum. But this recovery is not complete. And over a period of time, deformation is permanent.This may lead to transfer of stress to other components of the building and affect its durability.

Experiments show concrete creep continues for a very long time; but detectable changes are found after as long as 30 years. The study of concrete and its properties were largely on a macroscopic level till about two years ago. This was when Franz-Josef Ulm of the Massachusetts Institute of Technology's department of civil engineering embarked on a study to understand the behaviour of concrete at microscopic level. Ulm found the basic building block of cement paste at the nanoscopic scale is calcium-silicate-hydrates, or C-S-H, which is granular in nature. These particles, thought to be about five nanometres in diameter, give concrete much of its strength and durability. Ulm's study showed creep is related to how these particles pack when they set in.

When you stack oranges in a container you can either arrange them randomly or pack them in order. You can pack in more pieces in a container if you arrange them in an order. Ulm hypothesized that C-S-H operates on similar principles when mixed with water. The particles have the tendency to reach the maximum packing density. But this density was still 74 per cent. So the particles had the space to moved around and this resulted in creep. 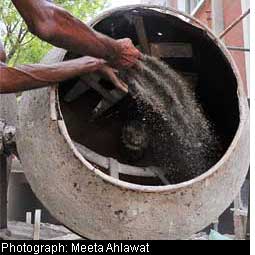 Scientists did have various recipes for stronger concrete. But most of them were obtained by a trial and error method. The addition of silica fumes, for example, was said to reduce creep. But no one knew why.

In unravelling this mystery Ulm was helped by the French scientist, Matthieu Vandamme. The two first worked on Ulm's hypothesis. They took nine samples of cement paste, each with a different density and applied constant pressure with a needle for three minutes. They found denser concrete experienced less creep since there was less space between particles and therefore less room for movement.

The scientists also found that an ultra-dense phase of C-S-H can be induced by carefully manipulating the cement mix with silica fumes. Silica fumes, a waste of the aluminium industry, when interacts with C-S-H forms additional smaller particles that fit into the spaces between the nano-granules of C-S-H. These spaces were earlier filled with water. This increases the density of C-S-H to as high as 87 per cent. With particles having very little room for movement, creep slowed down.

We still cannot prevent creep. But the slowdown effected by nanoscale packing can have a remarkable effect on the durability of buildings structures built to last for 30-40 years could last for hundreds of years. Until now concrete structures have been massive thinner structures were more sensitive to creep. This new understanding might help produce light and strong structures.

T V Venkateswaran is with Vigyan Prasar, a government body in New Delhi