A crisis that will redefine civilization

The environmental movement has reached an interesting point: it seems well known, yet an outsider in politics. Greens are the strangers at the door, and the world remains unsure about letting them in. Huge strides have been made and the idea of climate change is accepted, along with the notion that we must act. However, for many, it is someone else's problem, or they think it may never get quite be as bad as threatened. I believe this phase is about to end.

I have spent the last two years researching a book on the global water crisis. My conclusion is parts of the world are about to start extracting more water than nature can supply. This water has gone to build cities and feed growing populations, but the volume cannot last. When we pass peak water, fields will dry up, cities will fail and society will experience a massive shock.

This will be no surprise for Indians.

For some years we have known that the rate of groundwater extraction for farming in the subcontinent is far greater than the rate of renewal. Further, the idea that the monsoon rains are finding a new path is not new. As for the tragedies of failed dam projects and exhausted rivers, this is a very old story indeed.

But I live in wet northern Europe and this message is not familiar at all.

The wet world imagines the water crisis to be something for the poor. A few government promises of aid, a few more pennies in a collection tin and the expectation of seeing another remote famine on TV is the level of understanding for many. Everyone has this idea that there will be a water war, but on some foreign land far away.

Peak water aims to destroy that casual ignorance. When India's water crisis gets worse, the people of Sweden, Canada and the UK will know all about it, and feel it deeply. Should the crops fail and manufacture declines in one part of the globe, the economies of the rich world will shudder. If populations go thirsty and society begins to fracture, everyone will be threatened.

We have reached peak water because civilization is thirsty. The organized, structured way of living on the planet that was invented in places like Iraq and along the Indus thousands of years ago depends on the control of freshwater. There is the obvious need for everyone to have enough to drink, but the link between water control and civilizations is deeper than that. The world we have constructed is built on the assumption that it will always be possible to direct water to the whims of man. History shows if the water stops running, then civilization will fail. 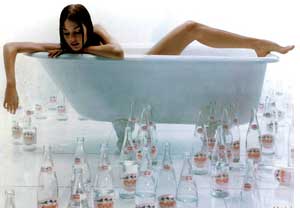 Our challenge is to let the world know that the water problems of India will directly affect the quality of life of people in Paris and New York--the global trade in food and goods will change fundamentally. Further, the world needs to know that water does not respect national borders or governments; solutions don't lie in standard ideas about war or protectionism. This is a global resource and we need to manage it on a global scale. To do that we need international bodies with greater imagination and wit than the World Bank with its addiction to the big scheme and free market.

This is why I think we are on the brink of a new phase in our environmental awareness, when people everywhere begin to understand the close connection between their actions and the consequences on the planet. This might prompt a fundamental change in our idea of what it means to be civilized. Instead of blindly accepting the Western ideas of achievement, we might measure success in how little we impact on our local resources and how well we conserve them.

We might begin to build our houses, offices, cities and fields in different ways, to live new lives suited to our location. When we hit the peak we have a choice; it is either the end of things or the beginning of a new story.

Alex Bell is a journalist in the UK. His book Peak water will be out soon