A deal for votes 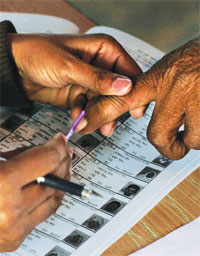 The season of elections is here. Over the next one and half years, there will be a general election and 14 states will vote for legislative assemblies. For the ruling parties, battered by a spate of corruption scandals, the Union Budget for 2013-14 is the only opportunity for churning out vote-catching schemes. Besides, this is the only year left for the ruling parties to announce policies and programmes that they can use in election manifestos. The scramble to woo voters is palpable.

The Congress-led Union government began the New Year by rolling out the ambitious direct cash transfer programme. The Congress sees in the scheme a sure formula to direct voters to its electoral coffer.

Just two weeks before the launch, the Bharatiya Janata Party (BJP) did a hat trick in Gujarat while the Congress won back Himachal Pradesh from BJP. These elections, hyped as the bhumi poojan for the 2014 general elections, laid out a broad electoral agenda for the country. The results shattered a few popular perceptions, while pointing out key strategies for the next rounds of polling. Issues like corruption and cut in fuel subsidies fizzled out in Himachal Pradesh, but these are the issues the opposition is going to use against the government at the national level. In Gujarat, the BJP foiled the Congress’s strategy of highlighting local issues. Rather, Chief Minister Narendra Modi used a new group of voters called “neo-middle class” to tide over anti-incumbency. The next elections are not going to be business as usual.

Unlike previous elections, politicians will face rural and urban voters in equal proportions this time. The census indicates high growth in urban population. About 50 million adults will cast their votes for the first time in the upcoming elections. A significant portion of them will be from urban areas—the neo-middle class. This means, no party will have a decisive victory unless it wins both rural and urban votes in a significant way.

However, a single agenda for both the sections will not be effective as their needs and aspirations are different. This may require hectic electoral engineering through government programmes and strategic campaigns by political parties. Interestingly, the two warring national parties—the Congress and BJP —are not in a position to vouch for support from both the sides. Congress, which won the support of middle class families last general elections, may not get it this time around due to general anger over corruption and economic slowdown. BJP otherwise known for its middle class vote may have to fight hard for the rural vote bank.

This brings focus back to issues that will swing votes in favour of parties. Not discounting the caste and class influences on Indian voting pattern, the last two years of consistent public outpourings on governance issues have readied the vast electorates to vote differently. Development and its delivery, i.e. governance, are going to determine the elections the most.

Let’s look at the headline agendas of the two national parties. BJP though does not have pan-India presence is overtly building on the middle class anger against the Congress. It will clone the “neo-middle class” formula of Modi in states it is already in power, such as Madhya Pradesh and Chhattisgarh. There it will sell the government’s facilitation of economic growth through massive private investments as good governance. But these states have large rural vote banks. To woo them Chhattisgarh is rolling out its own Right To Food law, snatching a key electoral candy from the Congress. The proposed law will cover close to 90 per cent of the state’s population. Similarly, Madhya Pradesh is implementing a host of conditional cash transfer programmes, targeting women, a loyal constituency for the ruling party. Lately, the state has also become proactive about implementing the Forest Rights Act to win over tribal voters.

The rural constituency needs fresh ideas to re-elect the Congress. In 2009, it earned dividend from the rural employment programme. This time, it pins its hope on the Right To Food Bill. While the bill is far away from being approved by Parliament, all the Central flagship programmes are being hijacked by states, many ruled by BJP. No wonder, the government launched the direct cash transfer programme in a hurry. The programme is being touted as the Congress’s ultimate weapon of good governance: “aap ka paisa, aap ke hath”. This, the party believes, will help garner support from both rural and urban voters.

As the party plays out this big-ticket initiative, it is now apparent that the government will expand the programme and monetise more development programmes in the budget for 2013-14. As the year unfolds, it will be interesting to see how voters respond to this. For this will have immense ramification on how our politicians conduct the business of development.