A debate on India's street food

The issue of hawkers cooking food on the roadside has become unexpectedly prominent, not to mention confusing. Not long ago, the media carried reports that the Supreme Court had agreed with the Municipal Corporation of Delhi's (mcd's) contention that hawkers cooking food on the roadside need to be banned to beautify the city in time for the 2010 Commonwealth Games and also because such food constituted a health hazard. This provoked strong reactions across different sections of society.

Subsequently, the court clarified that it had imposed no ban, but merely directed the mcd to provide infrastructure for the maintenance of hygiene. While this reassurance is certainly heartening, upon closer inspection it actually gives rise to more questions than answers. The larger issue concerning the status (and contingent rights) of hawkers has caused much confusion.

A predominant reason for this lies in the attitude of the executive, specifically municipal bodies. For decades, hawkers have constituted a convenient target for 'beautification', 'hygiene' and other knee-jerk drives, which camouflage the fact that municipal bodies have so far failed to frame a clear-cut, rational and, most important, sustainable policy towards hawkers.

Not surprisingly, such 'policy' initiatives have spawned intensive litigation. Back in 1967, in Pyare Lal v. New Delhi Municipal Corporation case, the Supreme Court held that the sale of cooked food affected public hygiene. Clearly, the health risks they constituted for the consumers were not at issue. In the 1985 decision in Bombay Hawkers' Union v. Bombay Municipal Corporation, the Supreme Court passed strong remarks about how hawkers had encroached upon pavements and roads, and how vested interests prevented municipalities from restraining them. However, it refused to ban the sale of food as an unreasonable restriction on the freedom of trade "There are several working families in Bombay, belonging to different strata of society, which depend upon the food supplied by hawkers. We do not see any valid reason why hawkers should not be allowed to sell cooked food, cut fruits and the like."

The Maharashtra Ekta Hawkers Union v. Municipal Corporation, Greater Mumbai, case in 2004 marked a new approach. Here, a distinction was carved between hawkers selling pre-cooked food, and preparing food in stalls or kiosks. This distinction also underscored a difference in approach between the executive and judiciary. The municipal corporation had framed rules that prohibited even the sale of cooked food, cut fruits and the like. The Supreme Court struck down this rule, but upheld the prohibition on cooking "We are unable to accept submission (sic) that cooking should be permitted. We direct that no cooking of any nature whatsoever shall be permitted." The court did not specify the grounds behind this pronouncement.

In February 2007, the Supreme Court examined various aspects of the implementation of the 2004 decision, and ventured towards a cohesive approach. But it said nothing specific about the sale of food, pre-cooked or otherwise. From its approval of the rules framed in the 2004 decision, we may gather that the distinction between cooking in the stalls and selling pre-cooked food continues to hold good.

The judgments referred to above give us a clear indication of how judicial perspectives have altered; first, from emphasising public hygiene to construing roadside food as a threat to consumers' health; and secondly, in making a distinction between pre-cooked food and food cooked within roadside stalls. 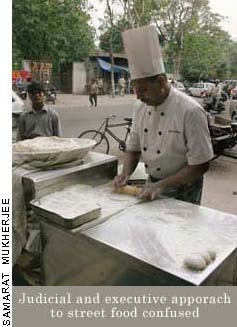 While the court has been unequivocal in emphasising this distinction, the fact that it has not specified the reasons behind it is significant. Media reports suggest public hygiene, and factors not wholly unconnected with the 'beautification drive' preparatory to the Commonwealth Games, constitute predominant considerations.

The situation is muddled further by the court's clarification that it has not banned roadside cooking in its entirety. In any case, this provokes the question does cooking on the roadside cause so deep an impact on public hygiene that it ought to be treated on a different plane from selling already cooked food?

The same question holds true in respect of the 'consumers' health argument. Common sense tells us that cooking by the roadside may be less hygienic. But is the difference so great as to justify a ban on cooking alone? Especially given that hygiene regulations are rarely followed in packaging cooked food?