A forest guard’s life is tough

Tangru Miji lives on the border of Pakke Tiger Reserve in Arunachal Pradesh. He used to be a skilled hunter until the park authorities recently convinced him to be a part of their anti-poaching efforts in the reserve.

Like other forest guards, Miji leaves for patrolling in the morning and returns at sunset. When there is a tip-off on the movement of poachers the guards camp in forests. Sometimes for several nights at a stretch.

Their lives are not easy, they told this author as she spent several evenings at anti-poaching camps, sitting around a campfire with them. The men, mostly under 35, belong to the Nyishi community that lives near the park’s boundary. The average age of patrolling staff elsewhere in India is above 50.

In a part of a country where community identity is paramount it is always a challenge to balance one’s job with this identity. For example, a forest guard celebrates a festival with people whom he might have to take action against some day. And if he does his job it does not win him accolades or appreciation from the community.

An even more challenging task is tackling extremist groups such as the National Democratic Front, a Bodo militant organization. Organized gangs of poachers and their families usually liaise with the militant organization if there has been an anti-poaching encounter. The extremists demand park authorities divulge the name of the forest guards involved in encounters so that they can take revenge.

Most forest guards, therefore, change to plain-clothes before leaving work. They prefer their identities not disclosed.

Some are killed. An elephant trainer told this author that he did not have the heart to go to the market anymore. He sees the poacher who killed P D Majhi, the trainer’s colleague and guide, at the market.

Moreover, a difficult terrain and malaria make it tougher for the guards—70 per cent of all staff have suffered from the disease in the past three years. Park authorities spent 3 per cent of their annual budget, Rs 1.38 lakh, to treat malaria last year. Not all bills are reimbursed on time.

There is also the risk of losing jobs. Called contingency staff, the guards earn Rs 2,500 per month and are usually the first ones to be sacked in case of a financial crunch. 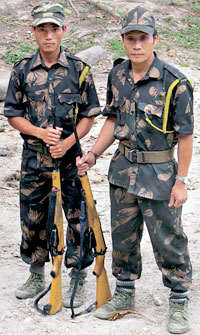 Luckily, the guards and Pakke have a leader in the divisional forest officer, Tana Tapi, considered a living legend of the tiger reserve. A dynamic leader is seen more as a bonus than necessity in the country’s national parks. If the forest guards do good work they are assured that Tapi would mobilize resources to keep them going and stand by them even in times of need.

It is also because of forest guards that researchers, this author for example, can return to the park every year to study wildlife. They are the real everyday heroes who never make it to the spotlight. It is a shame that a formal framework to keep the frontline staff provisioned and motivated does not exist in the country.

There are only donations: Wildlife Conservation Society has donated uniforms to forest guards and a private company has donated medicated mosquito nets.

What it takes to conserve biodiversity at the ground level is very different from the buzzwords of today’s conservation science. Carbon credits and global warming require long-term strategies. By the time carbon credits and payment for ecosystem services becomes reality, there would be nothing left to conserve. The threats from poaching and habitat loss are pressing concerns and need immediate action. Not looking after the well being of forest guards and keeping them motivated is failure to recognize that these foot soldiers have been instrumental in protecting wildlife. Miji, the author hopes, will never go back to hunting.

But he just might if their lot continues to be ignored.

Nandini Velho is a junior research fellow at the National Centre for Biological Sciences in Bengaluru. Her interests lie in plant-animal interactions and wildlife conservation