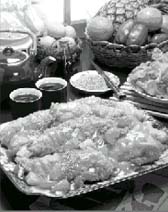 It is widely agreed that the bse scare (popularly known as the madcow disease) in the United Kingdom was badly handled by the ministers and officials responsible for food safety. Other governments might have noted and carefully learnt. Not so the government of neighbouring Belgium.

In January 1999, a chicken producer detected problems. His insurance company traced it to fat in the feedstuff which was supplied by the manufacturer, Verkest. The feedstuff was found contaminated with dioxin. The government was presented with a scientific report in March. The problem was identified in April. But it was not until May that rumours began to circulate and public warnings were issued.

There was the usual flurry of reassuring statements -- like, only a small number of animals being affected, problem now contained -- which were not wholly believed.

Today, Belgium, being a significant food producer and exporter, is the home of much of the machinery of the all-(even over) mighty European community. Yet government officials only got round to walking down the street to the European Commission ( ec ) with a notification of the problem at the end of May. This behaviour is not regarded as very communautaire and a fine is being considered. Further, the commission refused to endorse the measures taken to protect the public and said Belgium had not demonstrated satisfactorily that there was only a single incident or that they had closed every affected farm. It banned the sale of poultry, egg, beef, pork and all dairy products in Belgium and for export elsewhere.

Verkest admitted that not one but three of its plants were producing contaminated feed and gradually the implications for users of milk products, beef byproducts -- which include gelatine -- and eggs became clear. Some 1,560 farms were directly linked to Verkest and at the last count 1,459 had been shut down. In Netherlands, where intensive pig farming is a vital agricultural industry, 350 farms were supplied by Verkest.

The public reaction of cynicism and unallayed concern was conditioned by years of corrupt incompetence in the Belgian government. It soon emerged that Belgium has no controls whatsoever over the raw material that goes into animal feed, has no list of certified dioxin-free farms and proposes a certification system based on self-declaration by farmers. The ec remains unimpressed.

At the climax of the affair, the June 13 elections loomed and the politician's aim -- to be re-elected -- dominated policy. Rather than face an electorate irate with empty food shelves, prime minister Jean-Luc Dehaene flouted the ec ruling and allowed banned foodstuffs back in time for weekend shopping. This move failed. Dehaene is no longer in power. Juggling for coalition places will take several more weeks. Dehaene is now being spoken of as a possible European commissioner.

Meanwhile, Britain's closest county to Belgium is Kent. It used to be known as "the garden in England" because of its fruit harvest but is now more a concrete covered conduit to Dover and the Channel tunnel and is sometimes called "the patio of Belgium". That phrase no longer amusing .

In the London ministry of agriculture fisheries and food ( maff ), presumed to be on its toes since the bse crisis, noted press reports and industry concerns were publicised in Brussels two weeks after the crisis. On May 28 (Friday), it faxed warnings to the food industry. The faxes arrived late in the day when the recipient staff had left their offices for the bank holiday weekend. No action was taken before the following Tuesday. But maff claimed there was little to worry about. It is another matter that the uk imports 13 million pigs and 13.3 million frozen chickens from Belgium, annually.

The final ramifications of the event are still to be seen and the cost, internationally, is yet to be computed. A sorry affair.

The writer is a freelance journalist based in the uk.