A mistake of judgment

Pioneering though the work has been, judicial activism has restricted the growth of a responsible and independent bureaucracy 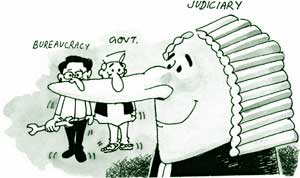 The justices of the Indian Supreme Court have, over the past decade, quite vigorously stirred the pot of social reform in India. Not so long back, there was a phenomenon called Justice Kuldip Singh, who blazed across the front pages of newspapers: shutting down polluters near the Ganga and the Taj, preventing construction along the coast, and restricting vehicular emissions in Delhi. For over a decade now, the Supreme Court of India, and to a lesser extent, the high courts, have set the national environmental agenda through their orders and judgments. Not unmindful of Arundhati Roy's fate some weeks back, I shall hazard to present a personal assessment of how the Supreme Court has fared in its proactive role in environmental regulation.

The mix of the men and women who constitute the higher judiciary in India is not much of a mix. Most Supreme Court and High Court judges are drawn from urban, professional, middleclass settings, and carry with them onto the Bench a value system and sensitivity not very different from that slice of society. Without intending to sound pejorative, in many respects, the concerns and priorities of the Supreme Court in the field of environmental regulation may be termed 'middleclass' or even, on occasion, 'elitist'. The middleclass moorings of our judiciary, combined with a significant trend in lawmaking, has enabled the courts to expand their turf beyond the traditional limits of judicial business. Until the 1970s, the role of the court was largely 'negative' -- to confine governmental action within constitutional bounds.

Unlike the 1970s, Parliament today has little time for details. In the field of social change, it lays down a broad legislative policy: such as, preserve and protect the environment. How to go about this is left to the discretion of the executive wing. As a result, most of the body of environmental law takes the shape of rules, regulations, notifications and orders. These are the laws that come up for interpretation before the judiciary. As we shall see, judges are far less deferential to subordinate legislation than to parliamentary enactments.

Another important feature that has driven the environmental regulation process through the courts is the proliferation of citizens groups and non-governmental organisations (ngos) agitating for better governance. The ngos frequently comprise activists drawn from backgrounds similar to those of our judges, with whom they share a value system. So when an environmental public interest litigation (pil) reaches the court, a bench which empathises with the ngo's concerns looks around to find a glaring failure on the part of the executive. The judges then set about the business of trying to set matters right. Since there is no resistance from the other wings of government, the new turf on which the judiciary treads yields easily to the foray.

A study of the recent volumes of the Supreme Court Almanac (scale) which reports even the briefest and most obscure pronouncements of the court -- gives a sense of what is happening in the apex court. A few emerging judicial trends become clearer with every fresh pronouncement.

First, the environmental jurisdiction of the Supreme Court is a 'creeping jurisdiction', one which grows and extends gradually. Take for example, the Vehicular Pollution Case (2002 (1) scale 162), which initially concerned emissions by government vehicles, and has now extended to mandatory seat belts! Second, the court appears quite willing to engage in micro-management. The Taj Mahal matter (2001 (8) scale 106; 2001 (8) scale 227; 2001 (8) scale 324; 2002 (1) scale 160; 2002 (2) scale 56) is a case in point. The court spent much time on the most suitable equipment for the air quality monitoring laboratory at the Taj and on police bandobast to prevent 'rowdies' from sullying the ambience around the Taj.

Third, the courts have nudged the bureaucracy to introduce new laws. An example of this is the rather bold suggestion in the Mussoorie Case (2002 (1) scale 164) that a law be enacted to divest parties of their illegal buildings. Fourth is the court's desire to improve the implementation of environmental laws. In the Yamuna Case (2001 (8) scale 323; 2002 (1) scale 421), the court threatened, admonished and attempted to shame enforcement agencies to come up with solutions that would help attain statutory environmental standards. Fifth is the thrust to educate the public in matters concerning environment.

The new role of the Supreme Court is that of a policymaker, lawmaker, public educator and super administrator all rolled in one. In the us, they have the Congress, the Federal Environment Protection Agency and bags of money to protect the natural environment. Here, we have our Supreme Court.

There are some achievements that undoubtedly do credit to the courts. The courts have clearly succeeded in heightening bureaucratic awareness in respect of environmental issues. The court's directions -- forcing industry to shut down operations because of excessive pollution or because they violated forest laws -- have helped sensitise the bureaucracy to environmental concerns. Implementing a closure direction involves a large number of bureaucrats down the line, and the process of sealing factories or ensuring that a mine in a forest stops operations has sent a strong message to the bureaucracy with regard to the importance of the environment in relation to economic activities.

The second measure that does credit to the court is that its orders have helped increase the deterrence factor by enhancing non-compliance costs. Until the higher judiciary issued closure directions against polluters and violators, industry regarded pollution laws as a voluntary code. Today, industry takes environmental laws much more seriously than it did a decade ago, and the credit largely goes to the judiciary.

Further, the courts' initiatives have resulted in a much greater public awareness of environmental issues, and have spurred citizens to organise themselves and secure a more healthful environment in their respective localities.

Another set of significant achievements relates to the entitlements created by the Supreme Court. Over the last decade, the court has interpreted the right to a clean environment to be an enforceable fundamental right, and has derived a clutch of collateral principles that environmentalists and ngos in the West have struggled to have their courts and lawmakers adopt:

• Enforcement agencies are under an obligation to strictly enforce environmental laws, and they may not plead infrastructural or other insufficiencies to justify non-performance;

• The 'polluter pays principle' requires a polluter to bear remedial costs as well as compensate the victims of pollution;

• The 'precautionary principle' requires authorities to anticipate and attack the causes of pollution; it also places the burden of proof on the developer or industrialist to show that his or her action is environmentally benign;

• Agencies charged with decision-making ought to give due regard to ecological factors, including:

• obligation of the present generation to preserve natural resources and pass on to future generations an environment as intact as the one inherited from the previous generation;

• Stringent action to be taken against persons who carry on activities for profit without regard to environmental laws;

• No power under an environmental statute may be exercised to defeat the object of the law;

• The State is the trustee of all natural resources.

In some fields -- such as vehicular emissions, municipal solid waste handling, groundwater management, aqua-culture and hazardous waste imports -- the Supreme Court has facilitated the formation of national policies or supplemented the legislative regime where gaps existed. Here, the court has muddled through, and there has been serious criticism -- much of it warranted.

Environmental regulation through courts has serious drawbacks, and it is to these drawbacks that I next turn. Judicial intervention is most effective in correcting bureaucratic conduct when it is selective and surgical. In several of the major environmental litigations handled by the Supreme Court, what began as a surgical intervention has expanded into huge administrative exercises extending over several years. The result is that the concerned government agency is debilitated by the continuous judicial supervision.

A decade after the Supreme Court's rebuke to the Kanpur tanneries in the M C Mehta Case , the Calcutta tanneries were still discharging untreated effluents into the river Ganga, forcing M C Mehta into yet another bout of protracted litigation. Quite evidently, the pollution control board, the polluters, the state government and the city of Calcutta had drawn few lessons from the previous Supreme Court judgment. The Ganga Pollution Case , the Vehicular Pollution Case , the Taj Case , each of which is still pending before the Supreme Court, were filed in 1985, and have been proceeding in fits and starts.

The cases have become a crutch, preventing the growth of strong bureaucracies. In many instances, the administrative agency has been reduced to preparing knee-jerk responses to judicial orders. Despite more than a decade of judicial activism, there is no evidence to show that the pollution control boards, municipalities and forest departments are institutionally stronger, or more capable of discharging their responsibilities today. It's more than likely that the administrative agencies will revert to their old ways the moment judicial oversight wanes. There is a need for autonomous independent environmental regulators with adequate budgetary support that can effectively implement our environmental laws. The higher judiciary has been unable to create a worthy successor who can build on the judicial initiatives.

There are fashions in the law and the current passion for environmental protection will soon yield to a younger subject. Inevitably, after a few years the courts will set apart less time and resources for environmental cases. What then? For a lasting legacy, the court must find new ways to strengthen the institutional capacity of our agencies. Transparency, public hearings, citizen representation on decision-making bodies, ombudsmen, assured budgetary support and autonomy are but a few of the elements that would help build stronger administrative agencies. It is time the court looked beyond the narrow issues before it, and addressed the bigger question of implementation of environmental laws, beyond Delhi and the Yamuna.

Shyam Divan is an advocate, and co-author of Environmental Law and Policy in India