The Hadron experiment will help understand some fundamental questions of physics

On September 10, at 10.28 am, local time, the first beam of the world's most powerful particle accelerator, the Large Hadron Collider (lhc) at cern in Geneva was steered around a 27 km long tunnel. This event had intended and unintended consequences. Both are of great importance to us, though in vastly different ways.

The intended consequence first. The successful steering of the beam around the full tunnel is a magnificent tribute to years of hard work by hundreds of scientists and engineers. Operationalizing a particle accelerator is not just a matter of flipping a switch. Thousands of elements which went into the machine had to work together in a fail-safe mode and their operations had to be synchronized to nano-seconds.

The 7 billion (us $10 billion) accelerator is likely to be the workhorse of particle physics for several years, if not decades. Building new and more powerful machines is prohibitively expensive. So unless some paradigm shift occurs in accelerator technology, it is unlikely that this behemoth will lose its place as the most powerful accelerator in the near future.

The machine will help scientists answer some of particle physics' most fundamental questions. Our current understanding of nature on sub-microscopic scales is based on what has come to be known as the Standard Model of Particle Physics. This model, which has been remarkably successful in explaining all known experimental facts, unifies three of the four fundamental forces of nature electromagnetism, weak nuclear force and strong nuclear force. How ever, the model depends critically on the existence of a particle called the Higgs Boson, which the press calls the "God Particle"--possibly due to a bout of over enthusiasm of some journalist. The consistency of the Standard Model demands the existence of such a particle and if it exists, the lhc should find the Higgs Boson. Though everyone believes the model is the correct theory of nature, the elusive Higgs Boson needs to be experimentally established for the Standard Model to become a theory.

lhc will shed light on a range of other areas in particle physics including the possible existence of extra dimensions other than our familiar 3 spatial ones. It will improve our understanding of the existing theories of subatomic particles and forces as well as prove or disprove some speculative theories.

These are all the intended consequences of the starting up of this huge and ambitious project. The operationalizing of lhc also had a much broader impact on the general public. Some of this good, some tragic. Among the healthy impact of the huge media coverage was the immense public interest in the project. I don't think ever since the landing on the Moon has any single scientific project made such an impact on the general public. 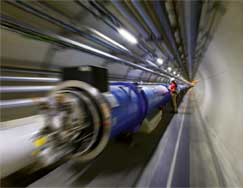 However, there were some misconceptions. First, for some reason, every newspaper and television channel was referring to the experiments at lhc as the big bang the idea being that the experiments will simulate the conditions which existed when the universe began with a Big Bang and hence improve our knowledge about how the universe was formed. This is bogus in the universe, the Big Bang is supposed to have happened at energy scales of 1019 GeV (Giga electron volts, an energy unit which is used in particle physics) or higher. lhc by contrast will only go up to energies of around 104 GeV, about a million billion times less. And, to put things in perspective, before the lhc the most powerful accelerators were at energies of around 103 GeV. Thus we have only increased the energy ten times. Though this is admittedly a huge technical achievement, it is important not to lose perspective.

The media, particularly the satellite news channels, also unfortunately, picked up some irresponsible information floating on the Internet about the world coming to an end by this experiment. This led to huge public scare and resulted tragically, in at least one young student committing suicide.

lhc will add to our understanding of nature at its smallest and largest levels. It is a monument to humankind's eternal quest for knowledge.

Shobhit Mahajan teaches at the Department of Physics and Astrophysics, University of Delhi