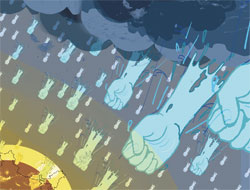 As I write this my city Delhi is drowning. It started raining early this morning and within a few hours the city has come to a standstill. The television is showing scenes of traffic snarled up for hours, roads waterlogged and people and vehicles sunk deep in water and muck.

The meteorological department records that some 60 mm of rain has fallen in just about 6 hours; 90 mm in 24 hours; and with this the city has made up for its deficit of rainfall this season. In other words, in just about 24 hours Delhi and its surrounding areas got half as much rain as they would in the entire month of September. Delhi, like all growing cities of India, is mindless about drainage. Storm water drains are either clogged or do not exist. Our lakes and ponds have been eaten away by real estate. Land is what the city values, not water. So when it rains more than it should the city drowns.

This month almost all parts of the country are hit by rain and flood. We don’t know the extent of damage because putting together news from across the country is difficult and the national media, obsessed as it is with corruption and the antics of politics, fails to present us with the scale and magnitude of breakdown and suffering.

Then we also take for granted that at this time of the year there will be rains and then floods. We do not look for news in these events; that there is something unusual about the ferocity of the rain and the extent of the damage.

I say this as a keen recorder of these events. Each year, unfailingly, around this time I end up chronicling the floods in most parts of the country. But each year, as I learn and write, I find the floods grow in intensity. Each year, the rain events get more variable and more extreme. Each year, the economic damage because of floods and rain increases. This year, for instance, the Himalayan state of Himachal Pradesh says its bill for rain damage is Rs 334 crore, roughly half the year’s budget for roads and infrastructure. As many as 30 lives have been lost as rivers have broken their banks, landslides have destroyed homes, hydropower stations have been shut and roads and crops damaged. What is worrying is the emerging pattern. Chief Minister Prem Kumar Dhumal says that in his state rains were normal in June, deficient in July and hyperactive in August. A record 342 mm of incessant rain within 24 hours on August 13 left the state shell-shocked and deeply damaged.

In Gujarat rains have left behind trails of damage. Over the past two months in different regions of the state, there have been cloudbursts and torrential rains, which have led to flash floods, ravaged homes and killed 140 people. The common thread in the events is the manner in which the rains have come—abnormally heavy rains with huge sub-regional variations. For instance, earlier this week, Becharaji taluka in Mehsana district of north Gujarat recorded 62 mm of rain, equivalent to a third of its annual average. On one single day, the otherwise dry region of Kachchh got nearly as much rain—some 250 mm—as it gets in a year.

Even as I write this, another region of India, Odisha, is struggling to cope with floods of high magnitude. Some 0.7 million people are already displaced as the Mahanadi has burst its banks at many places. My colleagues tracking developments there say this is mainly because there has been heavy rainfall in the catchment of the vast Hirakud dam. As a result in less than 24 hours the Hirakud managers, without warning and notice, opened all its 59 gates, releasing huge volumes of water into the already swollen river. This part of the country, which was recorded to have deficient rains of 40 per cent, is now in surplus. In just three days enough water has fallen to make up for the shortfall.

There is no doubt, therefore, that something strange is afoot. Scientists will tell you that there is a difference between weather and its natural variability and climate change, a pattern brought about by human emissions heating up the atmosphere faster than normal. Scientists who study the monsoons will tell you that they are beginning to make that distinction between “normal” monsoon and what is now showing up in extreme rain events. This when the monsoons are a capricious and confounding natural event, hard to predict and even harder to pin down.

Clearly, it is time to accept that we are beginning to see the impact of climate change. It is time to demand that the world change its ways to mitigate emissions. It is equally important we change the way we deal with water. The opportunity lies in making sure that every drop of the rain is harvested for future economic use. Since rain will come in more ferocious events we must engineer for its drainage and storage. Channelising and holding rain water must become the nation’s mission.

This does mean that every waterbody, every channel, drain and nullah and every catchment has to be safeguarded. These are the temples of modern India. Built to worship rain. Built for our future.