A pause on hydropower

The decision of the Union environment ministry to allow parts of the Ganga’s tributaries to flow freely in Uttarakhand, indicates there is finally some recognition of the environmental impacts of hydel projects, long hyped as clean energy producers.

Dams in Uttarakhand and the Northeast have been at the centre of controversy for some time. But till recently little attention was given to the country’s leading hydel producing state, Himachal Pradesh. A recent one-man committee report presented to the state’s high court offers some hope.

An individual EIA can scarcely show cumulative harm of all projects on a river basin. In his report, Shukla observes that more than 20 projects on the Sutlej spell doom for the river. He recommends river basin studies instead and emphasises what activists have been saying for years.

His report still leaves a lot to be desired, and to understand the report’s loopholes, let’s study its roots. The High Court of Himachal Pradesh commissioned the report based on a suo motu notice on tree felling by a hydel project. Shukla’s mandate was limited: he had to look at compliance of forest clearance conditions.

He mentions this limiting factor at the beginning of the report, which studies only 11 projects, restricting itself to assess forest clearance conditions rather than environmental and socio-economic impacts.

These 11 projects are the large ones: 100 MW and above. The overriding assumption was that large projects cause more damage while smaller ones are relatively harmless. Experience shows that local dependence for irrigation, drinking and watermills is higher on streams that are the sites of smaller projects.

Another area of concern is that the report does not mention loss of riparian and forest rights, non-compliance of the Forest Rights Act 2006 and impact on livelihoods of communities living above tunnels or downstream of these projects.

The approach is typical of judiciary and bureaucracy, which looks at the environment without thinking of people who inhabit it. 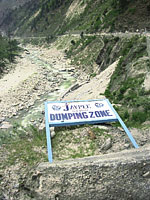 Shukla fails to mention another limiting aspect of the committee. To get an unbiased perspective on issues of noncompliance it is vital for a committee to appoint at least one member independent from the government. The committee’s credibility would have increased manifold if it were more autonomous. On scanning individual case studies it is becoming apparent these have been dealt leniently and “found” complying with conditions.

A controversial project like Jaypee’s 1,000 MW Karchham Wangtoo, against which communities have filed a case in the Supreme Court, has been given a clean chit by Shukla. Tidong, Sainj and Sawra Kuddu projects, which have harmed plantations, have been exonerated of environmental damage.

This is not surprising since Shukla relied on data given by his own department and company staff. In case of the Tidong project, he says, despite grave violations, it is “not practical” to cancel the clearance because of “investment made by the company (Rs 50 crore)”.

It would have been ethical if the committee had met the affected community and environmental groups to seek inputs on specific projects. Unless backed by an independent and participatory assessment that focuses on the fragile Himalayan ecosystem and people’s livelihoods, building a case against damming and tunnelling of Himalayan rivers will be an incomplete exercise.

Despite shortcomings, the report can sharpen the discourse on hydropower in the state. Community organisations and environmental groups from Himachal have written to environment minister Jairam Ramesh backing the committee’s suggestions and asking for a halt on further clearances to hydel projects in the state. But hydel developers have already launched an offensive.

The author is a researcher-activist in Himachal Pradesh and can be reached at manshi.asher@gmail.com