A Query For Kaushik Basu

FDI in multi-brand retail will fight inflation, check the small trader and help farmers get better prices? That’s quite a task 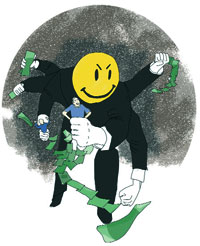 There is something about what Kaushik Basu says or writes. After the first gasp of surprise you invariably have questions—simple, silly questions that one is afraid to ask. Sometimes, what the chief economic adviser in the finance ministry advises can leave you dumbfounded. As most people seemed to be when he proposed that giving bribes ought to be legalised. That is, until Infosys Chairman Narayana Murthy took up the idea at a public lecture and decided it was an interesting idea (he would, of course) and should be implemented.

Here’s the gist of what Basu himself calls a small but fairly radical idea: “Harassment bribery is widespread in India and it plays a large role in breeding inefficiency and has a corrosive effect on civil society… we should declare the act of giving a bribe in all such cases as legitimate activity. In other words the giver of a harassment bribe should have full immunity from any punitive action by the state.” A query from my local vegetable vendor: “who will protect me from the police force if I announce that I give daily bribes to one of them?”

But Basu’s views on bribery are not as radical as the FDI-in-multi-brand-retailing-will-cure-all-our-inflation-problems thesis. This idea first sprouted in the Economic Survey 2010-11 but then reasons were somewhat different. This is what the Survey said. “Permitting FDI in retail in a phased manner beginning with metros and incentivizing the existing retail shops to modernize could help address the concerns of farmers and consumers. FDI in retail may also help bring in technical know-how to set up efficient supply chains which could act as models of development.” Technical know-how to set up an efficient supply chain, we need FDI for that?

On TV, in May, Basu said cleaning up the supply chain so that people like you and me get vegetables at reasonable rates and cutting down the difference between prices at the farm gate and the shops was the priority. The idea, he said, was to bring about some kind of regulation so that big chains compete with ordinary, small trader and the small traders also put pressure on them so that they don’t monopolise the market. A rather interesting thought this. My local kirana merchant keeps cutting prices till he matches those of the Walmart fraternity or vice versa?

A couple of months down the line at a press conference to report on the committee he headed on FDI in multi-brand retail, Basu appeared to have thought deeper on the issue. “It is time for India to allow FDI in multi-product retail and the IMG recommends that the government considers this at the earliest. Reform in this sector can be an effective inflation busting measure.” But the main message was that my neighbourhood Reliance Fresh store (part of a chain) and a Spencer’s outlet were still “primitive and that large losses were occurring as products passed through the supply chain from farm to the retail customer”. All this dated technology and managerial methods used to move products from one part to another lead to value erosion all the way which, in turn, raise the price that consumers have to pay. Reform in this sector can be an effective inflation-busting measure. A query from the mandi chieftains: “what wastage? Can you really put a figure on it? Most of the vegetables and fruits are sold at different rates till we dispose of most of the stock.”

Of the half dozen nations that the Survey cited as exemplary countries that had no cap on equity, were Brazil and Argentina. Just checked up the inflation rates in these countries: Brazil last reported inflation at 6.7 per cent in June and Argentina 9.7 per cent. A query from the college student studying first year economics: are the supermarkets in those countries not functioning well? And when India’s own inflation was 4 per cent and below, what then? Were the local groceries cutting their margins—already much lower than that in a host of countries that Basu cites as exemplars—further?

But for all these queries Planning Commission member Abhijit Sen has a snappy answer. Last week as news broke that the committee of secretaries had decided that the government should allow 51 per cent FDI, he told Mint that all this talk of curbing inflation was a lot of hooey. It quoted him as saying: “If you want to allow FDI in multi-brand retail, allow it. You do not try to cover it up with all sorts of arguments.” Query from Abhijit Sen: Can FDI change the Agriculture Produce Marketing Committee Act? It’s a law that stops farmers from selling their produce directly to consumers or retailers.