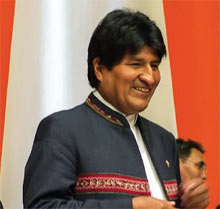 SOMETHING stirring, something refreshing occurred in distant Santa Cruz de la Sierra in mid-June. Known as just Santa Cruz, this is the capital of Santa Cruz province in eastern Bolivia and the most prosperous and bustling of metropolises in this Latin American country. It is here that dozens of heads of government and senior ministers gathered on June 14 and 15 to commemorate the 50th anniversary of the formation of G77+China. And it is here that the developing countries chalked out a radical new growth trajectory that spells some hope for our doomed planet.

The G77+China, which has grown into a club of 133 countries from the original 77 who banded together in 1964 to promote their economic interests, decided to set their compass towards what they term “a new world order for living well”. If that sounds like the mystic creed of a religious sect, banish the thought. It’s a simple prescription for living in harmony with nature which Evo Morales, the charismatic Bolivian president who was the moving force behind the “live well doctrine”, laid out in detail for fellow-members of the group. “We have reached the limit, and global actions must be taken urgently to save society, humanity and Mother Earth.” It was a warning and an appeal that clearly found resonance with G77 which quickly adopted the 40-page document consisting of 242 paragraphs.

What Morales got the 100-odd leaders—India was represented by its ambassador since no one from the new bjp government made the trip to Santa Cruz—to agree upon is a detailed blueprint for discarding the neoliberal capitalist system that has destroyed nations and communities and in its place follow a development agenda that allows the participation of all stakeholders in “an equitable, transparent, consultative and inclusive process”.

From the rousing opening speech to chairing a marathon 13-hour plenary meeting the next day, it was a Morales show all the way. “Only we can save the source of life and society, Mother Earth,” he declared.  “Today another world is indispensable because otherwise no world will be possible.”

Am I being carried away by the rhetoric of a romantic visionary, a people’s leader who appears to spout the kind of speeches that is the stuff of World Social Forum jamborees? Not really. Consider the hard facts and figures of what Morales, the first president to come from the indigenous majority of Aymara Indians, has achieved so far for the Plurinational State of Bolivia.

In 2006, when he nationalised the country’s hydrocarbons, a core component of the Bolivian revolution, the western world had predicted doom and disaster. Instead, state ownership of its natural resources has resulted in a higher GDP and along with income-redistribution policies brought about a more egalitarian society. Successive increases in the minimum wage, annual salary increases in excess of the inflation rate and cross subsidies have shrunk the disparities between the rich and the poor. So it’s a clear headed vote for Morales.

India, on the other hand, appears to be heading in the reverse direction with policies that will only exacerbate environmental degradation and rupture the natural balance further as more of its people are displaced and face further deprivation. For starters, there is the decision by the Narendra Modi government –a decision rushed through in less than three weeks after it was formed – to raise the height of the Narmada dam which will displace a mindboggling 250, 000 people, mostly tribal folk. Environmental clearances are to be speeded up and diluted. For another, the few labour laws that protect workers are being dismantled to spur growth. How much out of synch is India from the live well doctrine enunciated in Santa Cruz?