A tiger in your bank

The old Exxon ditty,"Put a tiger in your tank", has been adopted by the World Bank. Reportedly prodded by its president, Robert Zoellick, the Bank will announce a new global initiative to save tigers. The 'signature tiger event' in Washington DC on June 9, will be co-hosted by several international conservation groups. Because such interest in wildlife conservation has been rare at the very top hitherto, there is much excitement within and outside the Bank.

Many conservation ngos see the Bank's tiger initiative as an opportunity to insert a preventive filter on destructive impact of the Bank's developmental projects--dams, highways, mines--on wildlife habitats. Some hope that the Bank (and its ally, the Global Environmental Facility, gef) can leverage China to curb its rapacious trade in tiger body parts. Others see more money in the pipeline to save tigers in the wild.

Sceptics, on the other hand, see the tiger initiative as a public relations ploy. They suspect that Bank simply wants to lend more profitably to high-growth economies of India and China, simultaneously green-washing its warty environmental visage.


The World Bank has so far failed to generally acknowledge the damage it has inflicted on wild lands through its development projects. However, the institution is unlikely to wear sack-clothes and ashes in public now for its past sins.

Although this is a global tiger initiative, the Bank desperately needs Indian involvement to maintain credibility. For all its problems, India harbours some 1,500 wild tigers. China has only a handful left, with 5,000 more captives waiting to be butchered, although domestic trade is still banned.

Consequently, there is a covert campaign to compel India to seek the Bank's assistance to save tigers. Officials are dangling before the Indian government the World Bank's "convening power", "expertise in tiger conservation", and "innovative business models" as baits.

Tiger conservationists in India--even those who do not viscerally hate the World Bank--are wary of this simultaneous courting of the Indian government and conservation ngos. They have reasons to be worried about what happens on ground when the Bank focuses its models, hybridizing conservation with development, on tigers.


What I saw unfold in my study area of Nagarahole--one of India's best tiger habitats--a decade ago provides a good example of what can happen with the Bank's intervention. The India Ecodevelopment Project (iedp -1997-2003), sponsored by the World Bank- gef combine, had worthy goals: enhancing conservation capacity of reserve managers; reducing negative impacts of local communities and engendering their support for wildlife protection. These goals were to be achieved by spending Rs 360 million over five years--roughly 8 times the usual budget of the reserve. The money was to be routed through hands of reserve officials or consultants.

For the record, I argued against the project, pointing out that clever verbiage covered naked avarice built into the project. I predicted several negative consequences: massive funding would attract corrupt elements in the bureaucracy leading to a collapse of protection; the deficient protective staff would shift attention towards lucrative 'development works' and 'habitat management; no credible education, monitoring or research could occur through the consultancy schemes proposed; the urgent and critical need to reduce human densities inside the park through fair voluntary relocation projects would get sidelined. Despite huge investments, the project would damage wildlife and habitats without increasing local community support.

Unfortunately, I was proved right.


The problems with the project were structurally rooted. Ecodevelopment tried to hybridize conservation with development in entirely inappropriate ecological and institutional contexts. The project pumped vast sums of money through a self-serving network of forest officials, consultants or 'civil society' outfits that mushroomed overnight. Apprehensions of conservationists went unheeded.

Responding to the crisis, Ajjinanda Poovaiah, an activist of the ngo, Wildlife First, filed a well-researched complaint before the Karnataka Lokayukta (state ombudsman) in February 2003, alleging official corruption and mismanagement under the project. 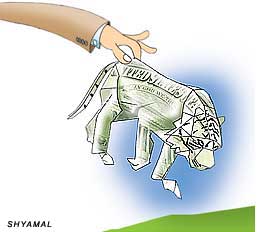 The Lokayukta, a retired judge of the Supreme Court of India, conducted a thorough field investigation with assistance from the complainant. This investigation and linked official inquiries showed that forest protection had virtually collapsed in Nagarahole during the project period. An uncontrolled fire had scorched 9000 hectares (15 per cent of the park area) in 1999. Not only had killings of elephants reached a new peak, professional tiger poachers from central India had crept in during 2002. At least 12,000 timber trees worth Rs 51 million had been cut and smuggled. Natural habitats had been destructively manipulated--Rs 7 million misspent applying chemical fertilizers to bamboo culms was a typical example. Under the village ecodevelopment corruption had run riot. According to the Lokayukta's report, estimated total losses were at a staggering Rs 60 million based on a partial sample. Unable to ignore this stench of bad publicity, the government prematurely terminated the Nagarahole project, leaving the World Bank red-faced. Dozens of forest officials, high and low, are now facing prosecution based on the Lokayukta's indictment.

Project design and evaluations were reduced to a farce by the incompetence of Bank staff and consultants. P K Sen, former director of Project Tiger, estimates consultancies and Bank overheads consumed 45 per cent of project funds. Five years later, other than a laughably self-congratulatory documentary film made by a consultant--and stumps of illegally felled trees and bleached elephant bones in the forest--there is little to show for the 'expertise' and 'innovative models' the Bank inflicted on the unsuspecting tigers.

World Bank's apologists will shrug all this off as a failure unique to Nagarahole, claiming Bank's conservation approach has worked wonderfully at other iedp sites. However, straws in the wind suggest that much the same thing happened elsewhere too.

The report of the Comptroller and Auditor General of India for 2006 severely criticized the project, specifically mentioning irregularities to the tune of Rs 120 million detected in the village ecodevelopment schemes at Buxa, Gir, Pench and Nagarahole reserves.

A sincere official who refused to partake in this bonanza was hounded out of Ranthambhore. Even in the Periyar project--which is a poster boy for the iedp --all is not well according to a study by Sanjay Gubbi from Wildlife Conservation Society: negative human impacts, which the project hoped to reduce, are mounting. 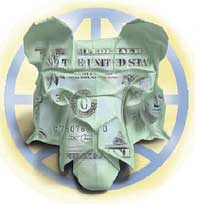 There is little evidence of increased public support for conservation. Assessment of another Bank project, in Kalakkad-Mundanthurai by Arjunan of Pondicherry University, shows the same pattern. Therefore, the World Bank's claims about the special expertise it will bring to tiger conservation rings somewhat hollow.

The government must consult widely and reflect seriously about the Bank's tiger initiative. At least one thing has changed since iedp swept through last time: the robust Indian economy can now afford to save the national animal without recourse to huge international loans. Acting on the Tiger Task Force's recommendations, the Prime Minister has ensured there is enough money--Rs 6,000 million in the current plan--for protecting tigers.

The real challenge lies in spending the money wisely, resisting temptations of the World Bank's 'convening power' and 'expertise'.

K Ullas Karanth is with the Wildlife Conservation Society-India Program, Bangalore. He can be contacted at ukaranth@gmail.com