A toilet per second 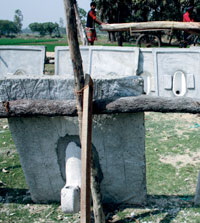 In April last year when a UN report said more Indians had mobile phones than toilets, it pointed to a major miss in the millennium development goal on access to sanitation in the country. The message was clear at the South Asian Conference on Sanitation (SACOSAN), the highest inter-governmental forum to discuss sanitation in the subcontinent, held in Colombo in April: India needs to make sure that every citizen has access to a toilet within a year. Else, the world will fail to meet the millennium development goals by 2015.

How achievable is this target? Even to meet India’s own commitment of “toilets for all” by March 2012 it has to construct a toilet every second for a year. Now do the maths. India has the largest number of people defecating in the open. According to a joint finding of the World Health Organization (WHO) and the Unicef in 2010, about 683 million of the 1.1 billion people worldwide who defecate in the open are Indians. Meaning, every second person in the country defecates in the open.

Worried about India’s slow progress in sanitation coverage— it is the least among the SAARC (South Asian Association for Regional Cooperation) countries—experts and policymakers unofficially admit it is not possible to achieve the millennium development goal on sanitation. A mid-term assessment of India’s progress towards the goals by the Union Ministry of Statistics and Programme Implementation in May last year shows 63 per cent of rural India is likely to have no access to sanitation by 2015; the target was to reduce the nosanitation areas to 47 per cent. In urban India, 15 per cent of the areas would have no sanitation facilities against a target of 12 per cent. Given the assessment, India’s own deadline seems unattainable.

This is an embarrassing coincidence that in April 2011 India completed 25 years of the Central Rural Sanitation Programme, the country’s first structured programme to ensure sanitation facilities. Will we ever be able to attain the universal sanitation coverage? The answer is both yes and no depending on which model India adopts.

India has been constructing 1.5 million toilets a year under its Total Sanitation Campaign. But 50 per cent of them remain unused, going by Prime Minister Manmohan Singh’s admission at SACOSAN in Delhi in 2008.

Sticking to toilet-using habit depends on several factors: good structure that protects privacy, availability of water and awareness of the economic benefits of good sanitation. But the most important factor is the way the sanitation programme is approached. At present, sanitation programme in India is all about making a toilet, or stopping the practice of open defecation in a village through awards like Nirmal Gram Puraskar. Still many villages revert to open defecation. Why?

Let’s analyse a case. In Odisha, some 700 villages have stopped defecating in the open in the past 20 years and none of them has reverted to the old practice. Rather, they have put together Rs 7 crore as corpus to ensure enough fund for needy people to build toilets. Using toilet has become a habit for them.

Sanitation campaign in these villages was started by a nonprofit, Gram Vikas. It adopts a diametrically opposite strategy than that of the government’s Total Sanitation Campaign. A village first works on assured water supply and then builds toilets. These toilets cost almost double of what the government provides under its programme, but they are of usable quality.

The cost difference is shared by the community: every household deposits Rs 1,000 to a corpus that takes care of future needs of toilets. At times it takes six to 14 months for Gram Vikas to mobilise a community before people commit to take up water and sanitation works. The village elects a vigilance group, with power to impose penalty, which monitors the use of toilets and drinking water facilities. Assessments of this now-famed Gram Vikas model show that the economic benefits of sanitation coverage, such as drastically reduced medical expenses, have ensured that communities stick to sanitation habits.

The message is clear: sanitation is not just about toilets. It is an issue that also concerns drinking water and health departments as every day people defecating in the open leave behind an estimated 100,000 tonnes of excreta. This pollutes water sources leading to diseases. But they do not work hand in hand.

The information and communication needed to make using toilets a habit is also highly inadequate in Total Sanitation Campaign and least expenses are allocated towards this. Without any community mobilisation, the sanitation campaign has been reduced to a toilet construction drive.

No doubt we need to construct toilets desperately. But its social and economical design must also change.