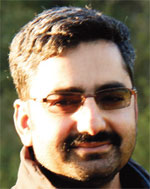 After three hours of slow but steady cruise through meandering river channels, the research boat finally reached its first halt for the day. By the time I disembarked, the tide had receded, laying bare the mudflat. I ploughed through the knee-deep muck for about 15 metres before I could reach the relatively hard ground. At a distance, the ubiquitous mudskippers hopped around aimlessly, while fiddler crabs scampered for cover to their underground dwellings. Maintaining the precarious balance with camera trap equipment in one hand and a stick in the other, I had only occasionally looked back. Covered with sharp pneumatophores and buzzing with mosquitos, the hard ground offered little respite but the dark and dense mangroves a few metres ahead were mesmerising. 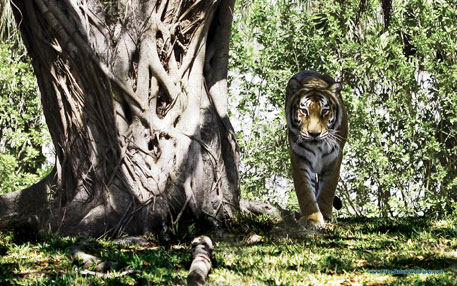 I was expecting my recently recruited field assistants to be on close pursuit, but when I finally felt at ease and looked back, they were still on the boat. It had taken a lot of convincing and coaxing to make them understand that a large part of the work needs to be done on foot and out of the relative safety of the boat. A few days ago, when I had told the curious local people at a tea stall that I had come to conduct a long-term research on tigers, I was regaled with stories surrounding the life of people and maneating behaviour of the Sundarban tigers. This was the first day in field, and having heard just too many incidents of man eating, narrated vividly during the first few days I had spent in Sajnekhali, all my senses were in overdrive. As I looked imploringly towards the boat again, my assistants disembarked, a bit grudgingly and I let go a sigh of relief having some company eventually.

I could understand their sentiments to an extent. For me, it was an exciting opportunity to do research on tigers inhabiting a unique mangrove eco system and a chance to earn PhD. I was not sure if the prospect of earning a few thousand rupees in an unforgiving forest created equal excitement among them. However, we walked towards the forest, slowly and cautiously, searched for tiger signs, and were soon rewarded with plenty of pugmarks on the soft mud. The initial grudge of the field assistants seemed to be diffusing into the thick, humid mangrove air. We deployed our first camera trap, returned to the boat, washed the mud off our limbs and continued to our next destination. For that one moment in time, we shared our enthusiasm, excitement, fear and a sense of brotherhood and achievement.

M V Maa Sumitra, the boat assigned to me by the forest department became my home and soon after Probash and Dileep babu, two experienced and courageous forest guards, started assisting me with the work. Having had spent about six months with my boat crew and assistants, I had no doubt left in the exceptional courage and hardworking nature of these people. But entering the forest always brought an eerie tension and excitement. Probash and Dileep would stand on guard with their old, rusted 303 rifles, while I conducted the work at hand. I remembered my nervousness on the first day. If a week of listening to a captivating storytelling full of myths, with the protagonist, a cunning tiger that could change its stripes at will, could unnerve me, I wondered what effect it would carry on the psyche of people who have been brought up in a tradition that views tiger as god, requiring worship and complete subjugation to keep him happy and at bay.

In most other forests of India, tigers might be looked at with awe and admiration or as the vehicle of goddess Durga by the devout ones. But in the Sundarbans, tigers were gods in their own right. In the folklore, they often shift roles from being greedy forest gods to that of being brothers who have shared their fate with people and with whom one has to share the forest resources.

Poorly thought out conservation efforts have not only failed to capitalise on such a rich tradition, but have alienated the very people who could have been the best allies for conservation.

Wildlife biologists depend on such traditional knowledge to successfully plan and execute their research. Could I rely on this local know ledge of tigers to inform my research? Was there an element of truth in the local description of tigers? Unfortunately, we will never know unless we allow science to work untethered from bureaucratic shackles.

As accounts of man-eating incidents are told and retold, each account gets laced with more and more of the orphic abilities of the tiger. An unfortunate and probably unintended ramification of this is the fact that the Sundar bans owe more of their fame to the “man-eaters” than to their natural beauty. The hoopla created around tigers often results in visitors being disappointed at not seeing the tiger, touted as the embodiment of sheer power, guile and deceit, unlike its lazy, harmless and almost domesticated counterpart in most terrestrial forests.

The biggest tragedy of the Sundarbans is that people view the deaths of the common masses as something inevitable and the natural consequence of living off a hostile forest. Annu Jalais notes in her well-researched Forest of Tigers: People, Politics and Environment in the Sunderbans the wry remark of an inhabitant of the Sundarbans:  “For the civilized and rich of the Kolkata, we are but tiger food.” A journey from the Canning Port to inside the Sundarbans will remove any doubt that a person might have in this statement. Not even 50 km as the crow flies, the Sundarbans feel like an ancient, undiscovered world hidden right under the nose of the uber metropolitan Kolkata. Marked by abject poverty and lack of basic amenities and health services, the region is a testimony to the hypocrisy of those singing success stories of India’s economic might.

During a research foray inside Sajnekhali, the wireless set of range officer Shankar Dutta accompanying us crackled. From conversation that ensued in Bengali, I could make out that a tiger had killed someone. Shankar directed the boatman to change course and then told me that a fisherman had been killed by a tiger the previous day. There was hardly any conversation in the boat for the next two hours. Once we reached the spot, a small forest boat and a dinghy with a few fishers on it were already there. A fisherman pointed towards the forest, but there was nothing that could be seen inside the dense mangroves. Scanning the edge of the forest, my eyes fell on a pugmark trail.

As my gaze followed the trail, a brown woolen cap stuck on a branch caught my eye. The fishers boarded our larger boat and an animated conversation between them and Shankar followed. Shankar later told me they were the relatives of the person who had been killed on the mudflat while they were searching for crabs and was then dragged inside the mangroves. The cap was the only sign left of him. The relatives were unwilling to try and retrieve the body, even when the forest staff offered help. When I enquired about it, one of the fishers said, “Do you want to sacrifice some more at the altar of the tiger?”

Lack of scientific studies has not helped resolve this issue of man-eating. Sudipt Dutta’s Conserva tion by murder debunks the “man-eater” myth and highlights the need to use a rational and science-based approach to conservation. Instead of coming together to deal with the crucial conservation issues, we find our bureaucrats and scientists locking horns over tiger numbers. Communities who share the habitat with tigers are often nowhere in this equation. The problems facing the Sundar bans are not just related to conservation, they represent almost a humanitarian crisis. When the only choice of livelihood takes one straight into the jaws of tiger, I guess the inevitable consequence is a high human toll. Should not we take a few leaves from the existing (and free) wisdom and ensure that our science does not fail the tiger, people and unique mangrove ecosystem that entwines them all together.

Rishi Kumar Sharma is a research scholar with Nature Conservation Foundation, Mysore. He can be reached at rishi@ncf-india.org