Aam aadmi: many promises to keep

What is changing the language of politics around public health and mobility in the city? What has enabled Aam Admi party that has got a convincing mandate, to avoid giving typical electoral sops of high speed roads and flyovers that defined the politics of the past and to promise “public, universal, and affordable transport”? There is a new electoral mind embedded deep in many social layers of Delhi today that city’s politics cannot ignore anymore 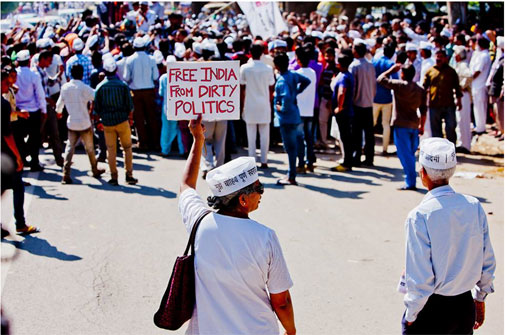 I could not resist taking another look at the election manifesto of Aam Aadmi Party (AAP) after their landslide victory in Delhi Assembly elections. Can election conversation in Delhi remain insular to the problem of the city’s killer air? So there it is. The ruling party in Delhi has acknowledged the problem—“Delhi is one of the most polluted cities in the world and a number of ailments can be traced to quality of air…”. It says the solution lies in mobility transition that also works for the poor.  If Delhi has given AAP 67 out of 70 seats and 54 per cent of its popular vote, this electoral promise merits decisive action. It demands a conversation in the city.

This manifesto has promised to create “public, universal, and affordable transport”. There is commitment to expand bus service on a massive scale; frame holistic transport policy for all modes – metro, bus, autorickshaws, cycle and last mile connectivity; improve connectivity with the outskirts; make walking and cycling facilities and remove route restrictions on cycle rickshaws. There is a package for the autorickshaws and e-rickshaws, the intermediate public transport system.

Subaltern trend
While manifestos are often seen as a piece of paper that never lasts in electoral memory of the voters or of those making the promise, this time we cannot be so dismissive. The city needs to create a political stake in these words.  It is important to put our ears on the ground to know what is changing the language of politics around public health and mobility in the city.  That is our hope, our chance for change. It is important to understand why a party that got a convincing mandate could avoid giving sops of signal free high speed roads and flyovers that defined the politics of the past.

Could it be that foul air, choked roads, neglect of mass modes and disproportionate spending on infrastructure for cars that locks in enormous pollution has begun to trouble a section of voters? Has the experiment with politics of fairness at the grass roots worked better to bring out concerns of the poor who are mobility-disadvantaged? Is middle class reacting to toxic air and the mobility crisis left a mark? Though fragmented and uncoordinated, there is perhaps a collective ability growing slowly in the city to respond to these problems and influence politics. Noticing this faint articulation of change is more important than getting cynical about loud conservative voice fighting against change.

This is an interesting subaltern trend. So far our political parties have somewhat responded to livelihood concerns of the informal transport providers—autos, e-rickshaws and cycle rickshaws—to protect the vote bank. This has inadvertently worked to protect these crucial modes for efficient last mile connectivity. But the new political challenge is to uplift them from the status of “poor beneficiary” in the fringe to their legitimate space in the integrated public transport system in the city to improve access for all.

But the toughest fight that the new government will face is in transforming our streets to improve safe access for all. The “holistic transport solution” that AAP has promised has to catch the political imagination for real delivery. Only this can empower the largest vote bank in the city—bus users, walkers and cyclists. Their political stake in protecting their modes can make or break governments.

The agenda of the new government has to recognise that the new generation transport and air pollution solutions are more nuanced and complex. The city needs more buses but also more routes, reliable and high frequency service and service guarantee, dedicated space for buses and infrastructure. Walking and cycling require intricate network to make a difference. Metro stations need to be designed for efficient integration with other modes and feeders. The city must not repeat the mistake of the past of only developing arterial corridors for high speed vehicle movement and not the networks for efficient movement of people.

Opportunity in alternative grassroots politics
All political parties so far have shied away from taking the parking issue head on, which has made the fight over urban space and cars the ugliest. But there is perhaps an opportunity in the alternative grassroots politics of the new ruling party and an advantage in their participatory approaches in neighbourhoods to involve people – both car owners and non car users, to develop parking area plans and find local solutions. Take people along to earmark and enforce legal parking, impose high penalty for illegal parking, fix high and variable parking rates to influence commuting choices; protect green areas and footpaths from parking. Sensitise them about the risk of uncontrolled parking pressure. Even consider a parking revenue sharing model for local area development. This is needed to deepen public understanding of what is at stake to win support for difficult strategies.

It will also be interesting to watch how the alternative politics, seeking political fairness for all, will play out to influence the hard decisions on spending priorities for air pollution control and mobility transition. Will the new government tax the bad to fund the good to discourage unsustainable modes and infuse more funds to make public transport attractive and convenient?

Arvind Kejriwal after taking the oath as the new chief minister of Delhi said in his debut speech – “more than the money what matters is intention (niyat)”. This gives us hope that the stated intent on clean air and sustainable mobility will decide the priorities of the new government.

It is clear, there is a new electoral mind embedded deep in many social layers of Delhi that city’s politics cannot ignore anymore.