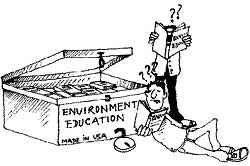 education generally denotes either the process or the system that a society uses to determine the path of learning of a child. It is primarily a preparation for the future. The child who receives primary education today will play a role in society for the coming half century. If the future of humankind is kept in view, then one problem which the world will have to inevitably face is the threat of undesirable changes in our environment. In many countries environmental degradation is already a problem and we may have to pay dearly in the future if we neglect environmental education today.

Environment education deserves serious, in-depth discussion and there is need for a new thought pattern because it provides an opportunity for the reconstruction of the education system as a whole. The agenda of environment education is so wide and composite that any significant intervention here will have a major influence on the system of education.On the other hand, it is impossible to impart a new character and meaning to environmental education unless there is a fundamental change in the system of education itself. Starting from 'what is worth teaching' and coming up to 'the methods of teaching' or 'the ideals held by a civilisation' or 'the role of the teacher' - there is hardly any pedagogic issue which is not related directly or indirectly to it. Environmental education compels us to undertake a full review of both the aim of education and the ideals of society.

The present form and content of environment education have been shaped by the environment-related experiences of the developed countries of the North. The context of the developing countries is quite different and the same approach cannot be entirely relevant here. Further, even the developed countries view and interpret their experiences in a slanted manner. The same paradigm of development and progress are still being used even as the present problems owe their origin to the spirit of conquest and subjugation underlying them.

What kind of problems can be solved by environmental education? Obviously, until a criterion is laid down for identifying those problems which come within the purview of environmental education, the enunciation of such a goal is merely rhetorical. Whenever environment is defined, whether in the official documents or the textbooks, a broad meaning is given to the term which includes the human-made environment apart from the natural one. But when it comes to naming the environmental problems, we are likely to come across the incident of tragic poisoning of the Love canal in the United States or acid rain or depletion of the ozone layer. That is to say, almost nothing beyond the problems pertaining to the natural or physical environment is considered a problem.

l At the conceptual level, it is desirable to define and understand environmental education both in the global and local contexts. Two issues deserve to be mentioned explicitly: first, the need of relevance in a specific milieu and, secondly, the basic question of autonomy and independence of collectivities at the local levels.

l What subjects should be taught at different levels and what should be the curricular framework?

l What should be the form of the schools and what activities may be organised there?

l Natural and human-made components of environment need to be understood both separately and together.

l It is essential to redefine the role of the teacher, who deserves more respect than is commonly accorded today and should have a greater say in the working out a strategy or implementing it.

l Syllabi, textbooks and other ancillaries need to be evaluated and reviewed. It is imperative to reduce the burden of information and to make it less boring and burdensome.

l A clearer understanding is needed regarding the role of the individual, the community and the state.

The author teaches mathematics in Patna University and is associated with Prativesh, East & West Centre for Environment Education, Patna