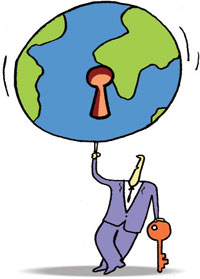 Lobbying, as we now know, sets the agenda for practically everything that governs our lives. No policy is ever made without someone seeking to gain from the most innocuous of programmes and projects. Take something as simple as inoculations. Governments cannot even take a decision on inoculating children against some disease without representations from companies producing the vaccine, high-profile philanthropic trusts, international organisations and healthcare groups in the country. The first and the second have corporate interests to promote—yes, donors, too—and are quite brazen about it, while the third entity often has a hidden agenda. Lobbying almost everywhere follows this pattern.

As reports pour in daily over the difficulties of finding common ground at the Nagoya conference of parties (COP-10) of the Convention on Biodiversity (CBD)—this column goes to print a week before the cliff-hanger is resolved—there is ample evidence of the above scenario being replayed in the Japanese city, where 193 nations are engaged in another attempt to conserve the planet’s fast depleting natural resources. The clout of the biotech industry over the proceedings is clearly visible. On October 14, just four days before COP- 10 opened, 21 heads of biotechnology associations across Europe, the Americas and Asia wrote to members of the CBD’s ad hoc working group on access and benefit-sharing (ABS) about their concerns. Their concerns begin and end with patents.

Representing more than 2,000 enterprises worldwide, the association chiefs said that while it supports the CBD’s objectives, the biotechnology industry needs incentives, “particularly strong and predictable patent protection”. The letter was stark in its message to poor nations who possess most of the world’s biodiversity. “Certain proposals made regarding intellectual property raise great concerns, and if adopted, would hinder, rather than promote, the access to, and transfer of, technology to developing countries—as well as hinder the generation of shared benefits in furtherance of the objectives to the protocol,” it said.

So what are the proposals that worry this billion dollar industry? Chief among these are the patent disclosure requirements and the fact that patent offices could become mandatory “check points”. Such check points, common sense decrees, would be necessary for biodiversity-rich countries to ensure compliance with the protocol but industry is claiming that such proposals would only serve to reduce investment in innovative products, including “those needed to address the largest threats to biodiversity, such as climate change and food security”. Therefore, the ABS Protocol “should not seek to modify and intervene in the international intellectual property system”.

The letter is a carefully constructed spin on the profile of this industry. It claims that the vast majority of its members are small and medium enterprises that have innovative technologies and products in various stages of development and that many of these companies are not profitable. “However, the industry as a whole invests tens of billions of dollars developing ideas into cutting-edge products, which may include the next generation of treatments for chronic and infectious diseases, and new crops...”

The small, struggling firms image of the biotech industry, however, took a battering at a side show in Nagoya when the international NGO ETC Group released a report showing that the world’s largest seed and agrochemical corporations are filing a slew of multi-genome patents by claiming that they are developing “climate- ready” crops to meet the challenges of global warming. The ETC Group’s contention is that the world is witnessing “the most dangerous patent claims in history” with a handful of the usual suspects (DuPont, Monsanto, BASF, Bayer, Syngenta and their collaborators) trying to control global agriculture. This, it says, is a sophisticated form of biopiracy in which the huge agricultural diversity of the planet is destroyed through gene patenting.

So far developing countries, especially Brazil, say they will not budge until their terms are included in the agreement. One of the sticking points and the key to hammering out an accord is the issue of derivatives, such as plant extracts, or metabolites (active compounds in pl ants or animals), which provide the most benefits—and profits. Developed countries, expectedly, are opposing this tooth and nail. Compromise formulas, too, are being rejected out of hand. One such formula is the model agreement developed by the Swiss Academy of Sciences. It proposes “arrangements for compensation in cases where commercial benefits result from resources/information originally accessed for non-commercial academic research”. But in this age of distrust who is to guarantee the compensation and what is a fair compensation?

Footnote: The final irony about COP-10 is that the biggest influence is being exerted by the US, which is not a signatory to CBD.