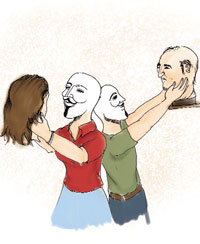 It is an unusual phenomenon that Europe has been witnessing in recent days. Hundreds of thousands of people have been out on the streets of cities as far apart as Tallinn, capital of Estonia, and Cork in Ireland protesting against the EU’s signing of a plurilateral trade agreement that is aimed at stopping piracy and counterfeiting. Braving a bone-chilling winter— in Stockholm it was minus 30°C—protesters have made their anger clear in marches and rallies that started end- January and are still continuing. Some governments have quickly capitulated.

Known better by its acronym ACTA, the Anti-Counterfeiting Trade Agreement has been four years in the making by a motley band of countries: the US, the EU, Australia, Canada, Japan, South Korea, Morocco, New Zealand and Singapore. Began in utmost secrecy in 2007, the agreement is intended to create higher standards of intellectual property (IP) protection than envisaged in the globally mandated Trade Related Aspects of Intellectual Property Rights (TRIPS) agreement of WTO. It also establishes a new IP enforcement framework that will operate outside the purview of WTO and UN.

ACTA will target counterfeit goods, generic medicines and copyright infringement of the Internet but it is only the Net aspect that has generated the massive turnouts in Europe; the generic medicines issue is something the protesters may easily be unaware of.

ACTA negotiations have come under fire from a number of developing countries, and India has made its opposition to such an undemocratic and far from transparent process amply clear. Even with the Net activists it was not until January 26 when 22 members of the EU signed ACTA that the dam broke loose. The young of Europe, primarily those living in the former East Bloc countries, then voted with their feet and forced the world to take note of what is probably the first such opposition to a trade treaty. Wearing Guy Fawkes’ masks for the most part, the youngsters, joined in some countries by more mature members of trade unions, forced their governments to take note of their opposition to a treaty that they fear will curb their freedom of speech through clampdowns on the Internet.

Why they did so now while ignoring concerns raised by some of the members of the European Parliament and analysts during the years of negotiation is an interesting point. The sudden backlash could be the result of the successful protests against SOPA (Stop Online Piracy Act) and PIPA (Protection of IP Act)—the US laws of a similar nature that would endanger Net freedom through sweeping censorship of websites. The most pernicious aspect of ACTA is that it ignores the legal protections for citizens. While acting at the behest of industry, primarily Pharmaceutical Research and Manufacturers of America and International Intellectual Property Alliance which includes the Business Software Alliance, Motion Picture Association of America and Recording Industry Association of America, governments appear to have overlooked the issue of civil rights.

Fortunately, the official reaction to the furore has been spectacular. Slovakia, Poland, Slovenia and the Czech Republic have suspended ratification of the agreement and the leaders of these countries have made their contrition public—and in the case of Slovenia abject. The Slovenian ambassador who signed ACTA was quoted by news agencies as saying, “I signed ACTA out of civic carelessness, because I did not pay enough attention,” and publicly apologised to her own children and her people. Polish Prime Minister Donald Tusk joined penitent European leaders, announcing that he was abandoning plans to ratify the deal, which he said had been a mistake.

But the protests and ensuing theatrics are not the final happy ending to the fight against repressive IP rules. Individual EU countries, the UK and France, for instance, have stringent rules against online piracy that pretty well circumscribe Internet freedom. France has a “three strikes” policy which allows the authorities to deny Internet access for a year to people who are caught downloading what it terms illegal content.

Some reports say over half a million users have been warned twice and are on the verge of Net expulsion. If it is Net freedom alone that resonates with the young— hundreds of sites have put out videos and photos of their ACTA protests—should those fighting for the health rights of people worldwide be rethinking their strategy? For years now, health activists’ warnings against ACTA have been voices in the wilderness.

Even today, there are few political leaders who have lambasted ACTA for its impact on countries and patients who depend on inexpensive generic medicines. The illegal seizure of shipments of generic medicines from India to third countries by the Netherlands has not occasioned any contrition by the EU. If this can happen without ACTA, there is the possibility of such incidents becoming the norm after the adoption of draconian IP regimes.