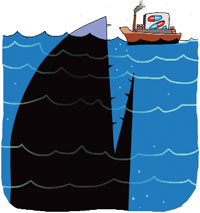 It is now final. Two weeks ago, the final text of the Anti- Counterfeiting Trade Agreement (ACTA), a plurilateral pact ostensibly aimed at stamping out the trade in counterfeit goods, was put out by the cabal of countries that have been negotiating it in secret for the past three years. It was only in April this year that the world got to see the contours of this deliberately deceptive measure when an earlier draft of the agreement was leaked on the Web.

In essence, ACTA seeks to strengthen the power of enforcement agencies, such as customs, to seize products that are fakes and infringe intellectual property rights (IPRs). It would allow customs officials to seize products ranging from luxury pens and watches to car parts and, most significantly, generic medicines—if they believe these are counterfeit. It also provides for draconian measures to fight online copyright violations.

The problem with this is the presumption that customs officials are competent to make such technical judgments. They are not. In the US, border measures have been shifted from the Treasury to the Department of Homeland Security—and it is unlikely that its officials, by any stretch of imagination, are experts on IPRs. These agencies could thus be used by rights holders to launch action against exporters from the developing world in a move that could destroy their business.

That’s because the mere initiation of proceedings places exporters in a tough financial position even if the goods turn out to be bona fide. So what happens if you need to get a consignment worth US $100,000 released? You hire a lawyer with a fee of US $2 million to get the legalities sorted out! Although ACTA is being presented as an anti-counterfeiting measure, it really has very little to do with controlling the international trade in counterfeit goods, whose value in any case has been vastly exaggerated by its proponents. Rather, the effort is to bring about a fundamental shift in the rules governing international trade in a wide variety of knowledge goods—counterfeit or not.

For India—and equally so for the international humanitarian health organisations who depend on Indian supplies— the primary concern is generic drugs. Since 2008 several consignments of Indian pharmaceuticals, standard medications and entirely legitimate, have been seized by customs authorities at European ports on specious complaints by the originator companies. That issue has been taken to the World Trade Organisation by India and Brazil.

Why are generic drugs such an issue? What we need to understand is the huge effort that has gone into tarnishing generic medicines—willy-nilly from India because the bulk of such exports emanate from this country. In recent years, there has been a systematic campaign by rich nations, in particular the US and those belonging to the European Union, to portray completely legitimate generic medicines as either counterfeit, spurious or fake.

Reputed trade regulations analyst Frederick M Abbott made a pointed reference to this campaign at a recent seminar organised by Federation of Indian Chambers and Commerce and Industry (FICCI) in Delhi. He told a worried pharmaceuticals industry here that a huge advertising blitz had been launched in Latin America and elsewhere by multinational originator drug companies to alter the public perception of generic medications.

This has been accompanied by a systematic marketing campaign to undercut Indian generics. ACTA makes the outlook gloomier for them. Adding insult to injury is the US claim that ACTA promotes “sustainable development of the world economy”.

In a statement accompanying the finalised text that was published on November 15, the Office of the US Trade Representative (USTR) said ACTA “includes state-of-theart provisions” to tackle counterfeiting. But academics and legal experts have been quick to warn that it would “create significant barriers to international trade, especially in generic medicines”.

Henning Grosse Ruse-Khan, senior research fellow at the Max Planck Institute for Intellectual Property, Competition & Tax Law in Munich, warns in a just published paper that although ACTA provisions do not mandate it, they “certainly allow (it) to extend border measures against goods in transit and detain these goods for suspected infringements of, inter alia, trademarks and patents in the transit country”. As a result, ACTA “can easily lead to seizures of transiting generics”.

A serious issue is that ACTA does not include any due processes, and has other disturbing features. It encourages award of significant damages based on the suggested retail price, which makes valuations and lost profit presumptions in favour of the rights holders. It also extends injunctions to third parties not directly accused as infringers of IPRs. For developing countries it can be described as a nothing short of an act of trade terrorism.