The new US foreign policy on environment, if well implemented, should shake African nations out of a long stupor into tackling massive eco-degradation in the continent 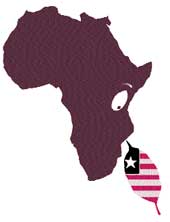 it is ironical that the degree of environmental degradation is yet unmeasured in many countries. This is despite the fact that with just a few years to go for this millennium's end, issues on environment have apparently constituted a particularly relevant agenda in the world.

The latter development, undoubtedly, is a direct fall-out from the 1992 Earth Summit in Rio de Janeiro, which, with its broad-based declaration on the environment, highlight the factors necessary for sustainable human development.

It is unlikely that many developing countries would, in the nearest future, be aware of the implications of environmental degradation. In this context, the recent us government initiative of making sustainable environment a major foreign policy issue did not really come as a surprise to many as the us had been in the vanguard of similar striking international issues.

The move which was announced by the former us secretary of state, Warren Christopher, is particularly remarkable because the us, which has so far moulded its diplomatic posture based on politics and economy, has decided to re-position itself to incorporate the environment.

Concerns have been expressed regarding the implications of this new us move on developing countries, particularly Africa, where environmental degradation maintained an all time high due to increasing incidences of poverty, illiteracy and over-population. These concerns can find articulation within the context of the focus of the new us policy.

The Food and Agriculture Organization (fao), in a chilling statistics, put the annual destruction of natural forests in the tropics between 1980 and 1990 at 15.4 million ha. This makes it imperative for any such initiative to be focused on Africa. Besides, as fao further revealed, within the same period, deforestation skyrocketed in 46 countries, especially in Africa; while the agency put the annual rate of deforestation in Nigeria alone at 250 km, afforestation rate in the country within the same period fell far below the target.

Although shortly after participating in the Rio Earth Summit some African countries have proposed certain measures to implement some of the Summit recommendations, a lot more still needs to be done. In fact, most of the laws to implement the measures are enforced only in the breach. For instance, in Nigeria, it is not yet known if any individual has been arraigned before any court of law, despite flagrant violation of several environmental laws covering environmental impact assessment, deforestation, industrial waste, siting of factories and the like.

Although Ghana has taken a pioneering step by forming a ministry for handling environment-related issues, Africa in general, as David Okali, professor of forest ecology and executive director of the Nigeria Environmental Study/Action Team observed, is yet to accord environmental issues the necessary attention. African governments, Okali rightly pointed out, are yet to make environmental concern a framework of national planning to achieve a sustainable growth.

Moreover, a better result would certainly be achieved if a National Environmental Scheme is implemented by each African nation, coordinated by regional bodies like the Economic Community of West African States (ecowas) and the Organisation of African Unity (oau).

In actuality, there has been little or no priority accorded to environmental issues in the yearly budgets of the African nations. The result, as a recent workshop in Lagos, Nigeria, observed, is that the composite annual amount spent by all African countries to combat environmental degradation is not upto even one-tenth of the nearly $115 million the us spends annually on a similar exercise.

In this context, the ngo Consultative Forum held early this year at Quagadougou in Burkina Faso, advised governments to consider ngos, the people, organisations and the private sector as partners in identification and evaluation of sustainable development policies.

Essentially, however, organisations like the oau, the ecowas and the Nairobi-based United Nations Environmental Program, should be exhorted to help enhance environmental survival strategies. This makes the emergence of the Intergovernmental Authority on Development in Africa and a South-South cooperation on environmental protection a political imperative.

Austin Uganwa is a freelance journalist based in Lagos, Nigeria.