#ShutItAllDown in Namibia: The fight against gender-based violence

Since early October, hundreds of furious demonstrators — mainly younger women — have taken to the streets in protest against gender-based violence 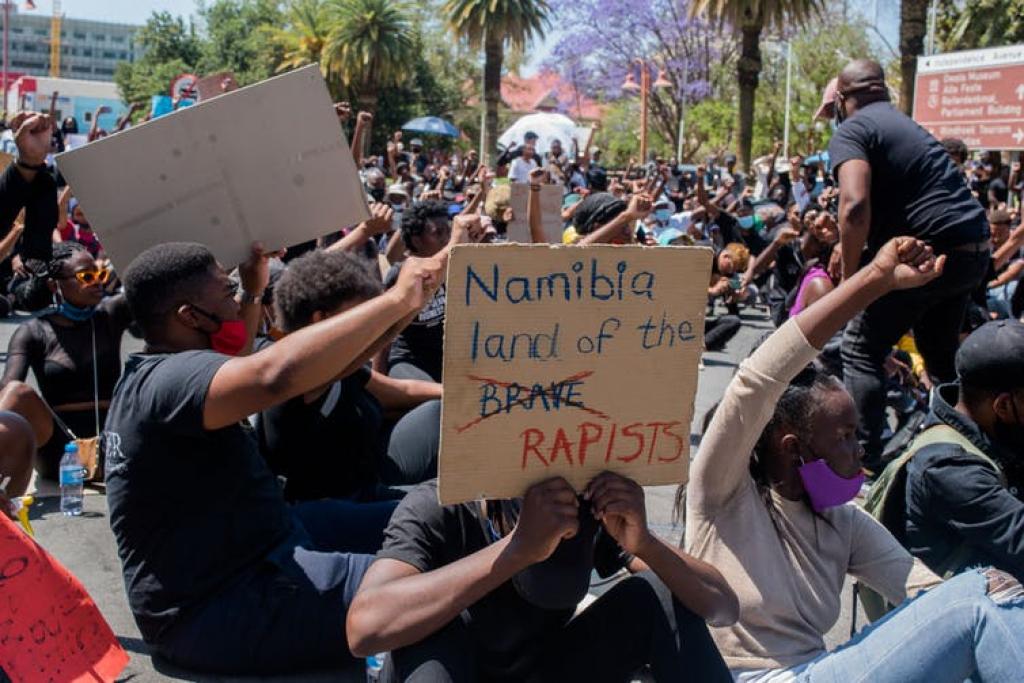 Since early October, hundreds of furious demonstrators — mainly younger women — have taken to the streets of Namibia’s capital, Windhoek, in protest against gender-based violence and femicide. Their action was triggered by a series of gruesome assaults on women and girls. Violent police responses only fuelled the outrage and led to continued public protests across several regions and towns.

A poster held aloft at a #ShutItAllDown demonstration in Windhoek in mid-October summarised the feelings of women under siege:

Words cannot truly explain how TERRIFIED I am to exist as a woman in NAMIBIA.

Toxic masculinity, it seems, has torn apart a social fabric that would allow the protesting women to live without fear – if such a fabric ever existed.

As one Namibian woman tweeted, “You stay, you’re abused. You leave, you get murdered. You go to the police, they victim blame, lose case docs or arrive too late. You protest, law enforcement harasses or arrests you. If this is not actual flaming hell. #OnsIsMoeg (we are tired).”

A case of anomie

The dramatic degree of femicide and gender-based violence in Namibia is evidence of what the French sociologist Émile Durkheim dubbed “social anomie”. Anomie characterises a collapse of moral and ethical values. A disbanded social contract (if it ever existed) leads to aggression and violence, often including self-destruction.

Suicide is a daily occurrence. Rates are among the highest in the world. As elsewhere, men are more likely to take their own lives. But cases include a growing number of young girls.

In a society where unemployment and impoverishment are on the rise — exacerbated by the COVID-19 pandemic — individual coping strategies are further eroded.

The long-term legacies of apartheid add to the challenges. Contract labour separated families and contributed to multiple intimate relations. Institutionalised under German colonial rule in the early 1900s, it destroyed the social fabric with lasting effects. Notably, gender relations within the anti-colonial struggle were also fraught with inequality.

Namibia has undertaken a leading role with regards gender-balanced parliamentary representation. Close to half of the members in the National Assembly are women.

A growing number of female ministers and deputy ministers have entered the current legislative period. But this has not translated into a progressive shift in gender politics. A comprehensive 2017 Gender Analysis by the local Legal Assistance Centre outlines the obstacles.

At 43.9 per cent, female-headed households registered in 2013 were among the highest worldwide.

They were lauded as the backbone of society by the leader of the country’s opposition in 2019. But reproductive rights remain limited. Abortion remains strictly regulated. Based on a 45-year-old law, termination of pregnancies is illegal, with few exceptions.

Despite a robust child maintenance law, fathers often fail to contribute to the upbringing of children. The daily plight of many women takes its toll. Baby dumping is a regular occurrence. To reduce the mortality rates among discarded newborns, their abandonment was decriminalised.

Namibia remains a patriarchal society. Toxic masculinity is anchored in paternalistic and patronising value systems of male supremacy exacerbated by the effects of colonisation.

It should be noted, however, that as in South Africa a growing number of younger men emancipate from such legacy as reliable partners, caring husbands and fathers. They have also been participating in the #ShutItAllDown protests according to images in local media.

But rape remains rampant. Incest and sexual abuse are a daily occurrence in cases ranging from grandmothers to babies.

As a report by a parliamentary standing committee disclosed, in 2017 and 2018 some 3,500 cases of teenage pregnancies were registered in schools in the Northern Region.

More than 2,000 students dropped out. In February 2020 the resident UNESCO representative declared that early and unintended pregnancies affect almost one fifth of Namibian teenage girls with at least 40 percent of pregnancies a result of non-consensual sex.

Yet authorities announced in October that Namibia will end the comprehensive sexuality education programme in schools. This was on the instruction of foreign minister and deputy prime minister Netumbo Nandi-Ndaitwah.

She argued that the programme is controversial for “its linkage to the universal promotion of abortion, the drive to legalise homosexuality and the sexualisation of children”.

Such perceptions by women in influential positions are no exception. As protests against sexual abuse took place on the streets, the minister of gender equality used some revealing language in parliament.

Commenting on the abuse of a 12-year-old boy she deployed an unfortunate metaphor: “You want to push your stick in that baby, the AK-47.” This provoked fresh protest actions by the #ShutItAllDown movement at her office, demanding her resignation.

Toxic masculinity is not limited to men. It also pervades the mindsets of women socialised in male chauvinist societies.

Gender-based violence has taken the form of a “shadow pandemic” in Namibia. The question posed by writer-artist-activist Beauty Boois is directed to everyone:

When will society stop slut-shaming and victim-blaming women, and start holding men accountable for their toxic and violent ways, instead of protecting them and making excuses for them?

Lawmakers tend to stress that Namibia’s legal system provides a robust framework to combat gender-based violence and sexual discrimination. But the realities paint another picture. A 2018 report by female researchers at the Institute for Public Policy Research concluded:

The current gender landscape will need to be actively challenged, including by those who benefit from it… For those who benefit from the current gender landscape — cisgender heterosexual men who display ‘typical’ male characteristics — this is likely to be a challenge, especially as empathy is not always prioritised when boys and young men grow up.

#ShutItAllDown has become a leitmotif for Namibians. As one activists explained:

The idea of disruption, as a means of protesting, is about confronting docile and properly maintained systems of power. It’s about asserting that abnormal situations require action that is, in itself, disruptive, drastic and abnormal.

Such confrontation can take different forms and build on many alliances. As grandmothers in an old age home showed, taking a stand is not age restricted.

“Solidarity, freedom, justice” was a slogan during the anti-colonial struggle. It remains a principle in the fight against the colonising practices of toxic masculinity today. And, as another old slogan reminds us, the struggle continues.