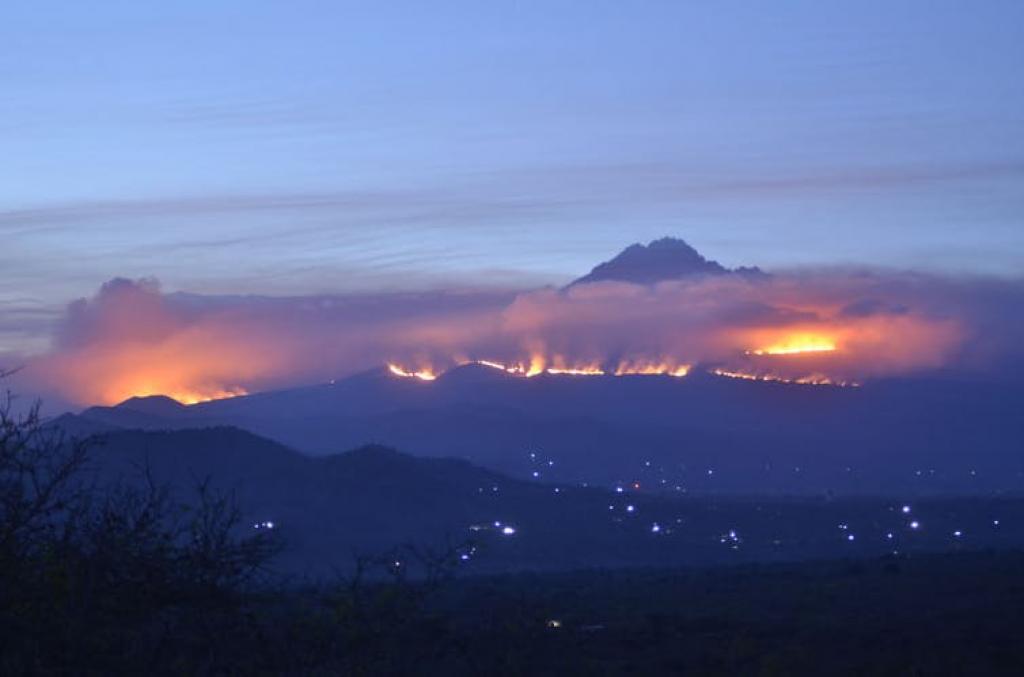 In October, firefighters in Tanzania had to tackle a number of fires on Mount Kilimanjaro, Africa’s tallest mountain and the largest free-standing mountain in the world. The mountain and surrounding forests fall into Kilimanjaro National Park, named a UNESCO World Heritage site in 1987. Andreas Hemp provides a glimpse into the mountain’s natural environment and the challenges it faces.

Is this the first time there has been a fire of this magnitude? If there have been fires like this before, what damage was done to the mountain’s vegetation and how long did it take it to recover?

Fires are quite common in the higher areas of Kilimanjaro at the end of the dry seasons, around February to March and September to October. Fire can transform land cover, but it also maintains it. Studies that I’ve done with colleagues (using pollen records buried in the soil that go back 50,000 years) showed that fires always played a role in shaping the vegetation belts on the mountain.

There have, however, been several severe fires on Kilimanjaro over the last few decades that have dramatically changed land cover.

Fires in 1996 and 1997 — years with unusually dry seasons — destroyed vast areas of old cloud forest. These are characteristically moist forests in high altitude areas which create unique environments. The forest was replaced by bush.

Vegetation has started to recover and shrubs have sprouted, but it’s far from being a forest, which would take at least 100 years to grow without fire. Since these old forests have an important function of fog water collection, the loss of these forests means a serious impact on the water balance of the mountain, much larger than the impact of the melting glaciers, which is ecologically negligible.

The impact of these former fires was much bigger than that of the recent one, which “only” affected bush land and not forest.

What type of vegetation exists on Mt Kilimanjaro and how unique is it?

Due to its enormous height, Kilimanjaro has several distinct vegetation belts.

It is surrounded on the foothills by cultivation with a unique mix of agriculture, savanna and forest. This harbours very rich biodiversity as well as the tallest trees on the continent.

Higher up the mountain — between about 1,800 and 3,000 metres — a montane forest belt encircles the whole mountain. This is one of the largest forest blocks in East Africa.

Even higher up, between 3,000 and 4,000 metres, there’s a heathland belt typical of the high mountains in East Africa. This vegetation consists of Erica, Protea, Stoebe and many other shrub species, many of them are endemic, occurring only on one or several mountains.

Erica shrubs burn very easily, which makes this vegetation belt particularly flammable. During wet periods without fire, the former forest can re-establish and expand to the tree line at 4000m. During dry periods, with recurring fires (natural and or caused by people), the forest belt shrinks and the ericaceous belt expands.

What challenges does the mountain’s natural environment face and have there been any noticeable changes over the years?

Over the last 150 years, the regional climate has become drier. This has caused the mountain’s glaciers to shrink by almost 90% of their former extent. The drier climate is also the reason for an increase in the frequency and intensity of wild fires in the upper areas of Kilimanjaro, affecting the forests.

Most of these fires are lit by people (such as honey collectors smoking out bees), but these fires would not have been so devastating if the climate was wetter.

There’s an interplay between direct anthropogenic (caused by people) and climatic impacts.

Since 1911 the human population on Kilimanjaro has increased from 100,000 to over 1.2 million. This has resulted in an enormous loss of natural vegetation. Kilimanjaro is becoming an ecological island, isolated and surrounded by agriculture. Over this period it has lost 50% of its forest cover. In the lower areas this is mainly due to logging and clearing. In the upper areas it’s due to fires.

In combination with global climate change, this forest destruction results in a decrease of moisture in the region. This will also affect agriculture in the region because it’s partly irrigated.

Who is responsible for protecting the mountain and how well protected is it?

In 2005, the forest belt was incorporated into the mountain’s existing national park area. This means that it falls under the responsibility of the Tanzania and Kilimanjaro National Park authorities. The forest belt is much better protected than it was before, as a forest reserve.

The banning of camp fires on the tourist routes by the national park authorities helped to reduce the fire risk. But it’s not possible to exclude the risk in this large heathland belt totally. Perhaps the acquisition of larger fire-fighting airplanes could help.

Fires are usually fought by hundreds of volunteers and firefighters, using shovels and machetes creating fire breaks by hand. This recent fire was the first time that a helicopter was used to carry water from nearby dams.

What else can be done?

It’s all the more important that the wildlife corridor connecting the Amboseli ecosystem in Kenya and Kilimanjaro National Park has to be well protected. It is under great pressure due to grazing and agriculture. This corridor is important for the migration of elephants, which stay now more and more on Kilimanjaro destroying the forest.