Is eastern Africa’s drought the worst in recent history? And are worse yet to come? 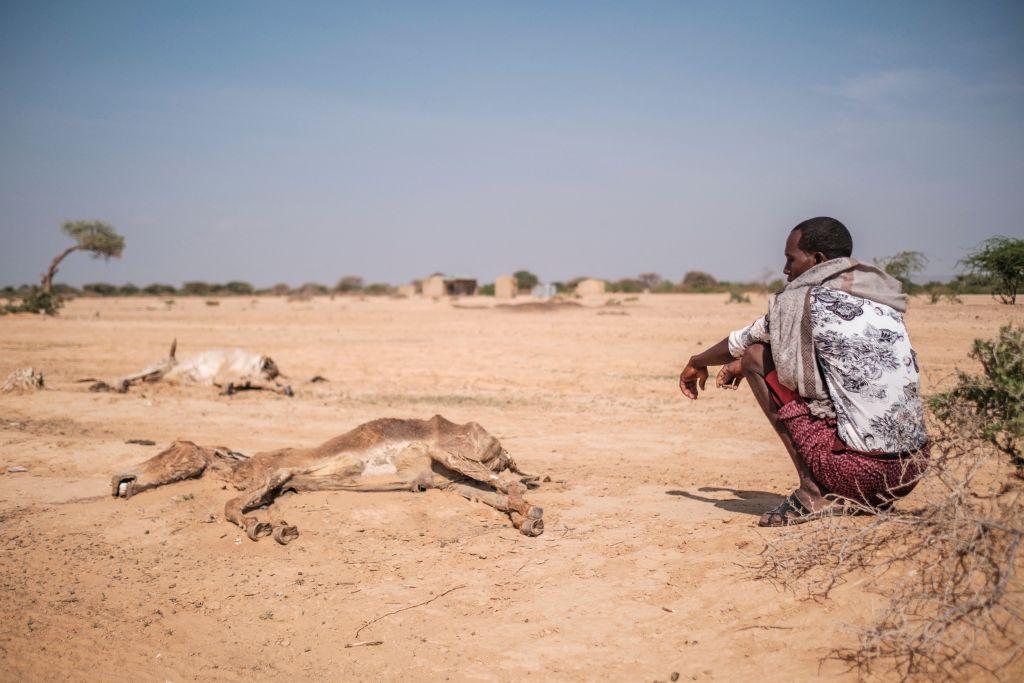 A man sits next to dead livestock in the village of Hargududo, Ethiopia, where there’s hardly been a drop of rain in 18 months. Eduardo Soteras/AFP via Getty Images

Large areas of Ethiopia, Somalia and Kenya are currently in the grip of a severe drought. An estimated 16.7 million people face acute food insecurity. That’s more than the combined populations of Austria and Switzerland.

Four consecutive rainy seasons have now failed since late 2020, a climatic event not seen in at least 40 years. This meteorological drought has resulted in a loss of soil moisture, caused waterways to dry up, and led to the death of millions of livestock.

The Horn of Africa experiences two rainy seasons per year. The timing varies across the region, but rains broadly fall from March to May (the “long rains”) and from September to December. The delayed start and then failure of the March to May rains this year has been felt particularly in equatorial parts of the region, where the long rains contribute 70 per cent of the annual total.

The situation is unlikely to improve in the short term. Forecasts suggest that the September to December rainy season could also fail. This would set the stage for an unprecedented five-season drought.

The ongoing humanitarian crisis caused by the drought raises serious questions about future food and water security in the Horn of Africa. The latest Intergovernmental Panel on Climate Change report projects that global warming will negatively affect food systems in the region by shortening growing seasons and increasing water stress.

The crisis also raises the questions: is the current drought the worst in recent history and might future droughts be even worse?

I’m a physical geographer who uses descriptions of weather conditions within historical documents, combined with meteorological data, to explore how rainfall has varied in the past across various regions of Africa – a discipline known as historical climatology. To understand the relative severity of the current drought, we need to examine both historical records and data.

For the purposes of this article, I am focusing on the last 200 years. This time-span includes what is called the period of instrumental record – the period during which we have used standardised instruments (called rain gauges) to measure rainfall. The earliest systematic rainfall data collection in Africa began in the 1830s for coastal Algeria and southwest South Africa. In eastern Africa, however, continuous runs of data are only available from the 1870s onwards.

Fortunately, we can fill in gaps for years and areas where there are no measured rainfall data using historical information sources. The most important of these are oral histories and collections of documents written mainly by settlers, explorers, missionaries and colonial governments that describe past climate and conditions related to climate.

There are several droughts that stand out.

According to recent research, 2016 was the driest single year of the last four decades – Ethiopia, Somalia and Kenya received 40 per cent less rainfall between August and October than the long-term average. The 2016 drought followed a particularly strong El Niño event, when patterns of warmer and cooler water in the Pacific Ocean shifted, with knock on effects for the Indian Ocean and eastern African rainfall.

The drought from 1983 to 1986 — which triggered global humanitarian efforts such as the music fundraising initiative Live Aid — was also very severe. Like the current drought, the event was prolonged and therefore had a cumulative effect. Going back further, rainfall series spanning the full instrumental period suggest that the mid-1950s was almost as dry as 2016 in Ethiopia and Somalia.

It is possible that even more severe droughts occurred during the pre-instrumental period. It isn’t easy to compare the magnitude of the rainfall deficit during modern droughts with earlier periods when rainfall wasn’t measured. However, a major, continent-wide historical climate study shows that eastern Africa experienced droughts – at least as bad as those in recent decades – throughout the 1820s and 1830s, during the 1880s and around 1900.

The 1820s-1830s drought was probably the worst of the last 200 years. Lake levels fell in central Kenya (with Lake Baringo drying up completely), and reports from European travellers describe prolonged famine, possibly lasting as long as 20 years, affecting areas including Kenya, Tanzania and Uganda.

A more recent historical climate study provides further detail for Kenya, including vivid descriptions of the multi-year, drought-driven, famine around 1900. This is locally referred to as the “lwaya” (crocodile) famine, as people had to hunt crocodiles for food. By 1902, colonial authorities had to distribute Indian rice, brought in via the under-construction railway linking the coast to Lake Victoria, as famine relief.

Taking this information as whole, the current drought in eastern Africa is clearly unprecedented in recent decades. This is due mainly to the fact that below-average rainfall has fallen in four consecutive seasons. The worst recent food security crises in the region have been associated with multi-season dry spells.

However, the droughts of the 1820s and 1830s, before the advent of global humanitarian aid, were even more protracted and therefore probably more severe in terms of cumulative human impacts.

In addition to having human impacts — recorded in the types of historical documents described earlier — droughts also impact upon natural vegetation and landscapes. These impacts leave a legacy in pollen and sedimentary records that can be studied by botanists and geologists to understand past climate variability.

Data from marine sediments in the Gulf of Aden spanning the past 2,000 years, for example, indicate a close association between globally warm conditions and drying in the eastern Horn of Africa. If this association holds into the future, global warming will be met with drying and we may anticipate worse droughts.

Climate change is already affecting rainfall levels in the Horn of Africa. Human-induced warming has raised the temperature of the western Pacific Ocean, leading to concerning rainfall deficits in eastern Kenya, Somalia, and Ethiopia. This may be the reason why droughts in back-to-back seasons are becoming more common in the region.

As with any semi-arid region, droughts are an integral part of the climate of eastern Africa and will continue to be so into the future. The positive news is that groups of scientists such as the Famine Early Warning Systems Network can now provide early warning of acute food insecurity. Drought in eastern Africa is often linked to the build-up of La Niña conditions in the Pacific Ocean. Forecasting is such that governments and aid agencies can now put emergency provisions in place well in advance of drought onset.

Measures to improve the resilience of eastern African communities to climate shock and stresses meant that the overall impact of the 2016 drought was much lower than the mid-1980s and 1973 droughts. As resilience continues to improve, it should be possible to move from crisis management to risk management of droughts in the Horn of Africa.