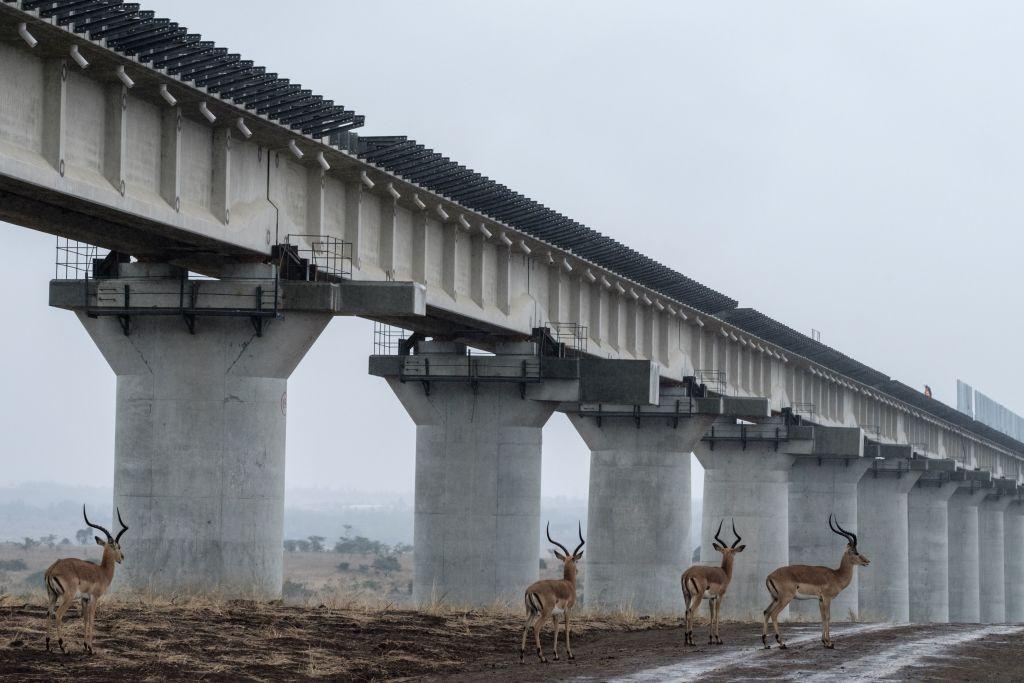 Kenya is constructing a railway line that connects the coastal port of Mombasa and the interior of the country. It is expected to terminate at Malaba, a town on the border with Uganda, and link up with other railways that are being built in East Africa. It’s locally known as the Standard Gauge Railway (SGR).

The passenger and freight railway line is one of the biggest infrastructure investments in Kenya’s history. Construction began in 2014 at an estimated cost of $3.8 billion (one dollar is equal to Rs 74.28), 90 per cent of which is supplied by a loan from the Export-Import (Exim) Bank of China and 10 per cent from the Kenyan government.

Although the actual land area affected by the railway itself is small, parts of it are raised and it cuts through a wide range of the country’s ecologically fragile and important ecosystems. For instance, the railway cuts across Tsavo Conservation Area (which supports about 40 per cent of Kenya’s elephant population) and the Nairobi National Park. It also traverses range lands in southern Kenya that support pastoral communities and are vulnerable to the impacts of climate and changes in land use.

My colleagues and I carried out a study to gain insights into all the impacts the railway was having on the environment.

The project involves many stakeholders including various levels of government (such as the National Environment Management Authority and Kenya Wildlife Service), local communities, civil society organisations and the private sector. For our study, we hosted group interviews and meetings with 54 key informants from all these sectors.

We found that the construction and operation of the railways has degraded, fragmented and destroyed key ecosystems. It increased soil erosion, land degradation, flooding and habitat destruction. It also affected water bodies and wildlife movement.

Environmental impact assessments for the railway were conducted, and these are of an international standard. The final reports, which included recommendations, were written to facilitate licensing by the National Environment Management Authority, the government regulator.

However, it’s become clear that the recommendations weren’t fully implemented. Several observers identified a lack of funding, technical capacity and political interference as some of the barriers.

Participants in our study identified that the railway line had an impact on soil, water and air contamination, during construction and operation of the line.

During construction, soil was compacted and excavated. It was also moved from one location to another to erect embankments. This has many effects on the environment. For instance, Community Forest Association officials (around the coastal mangrove forests in Mombasa) observed that sediment, eroded from the rail embankments, affected streams and plants. They said that:

Another challenge was that underpasses were built to allow for movement under the railway. This is because the railway is raised. But these underpasses redirected surface water and rainfall courses. Respondents from Narok county observed that this led to erosion, leading to the siltation of water sources, including Lake Magadi – a unique saline, alkaline lake which is surrounded by wildlife and a major source of trona. This is a sodium carbonate compound that is processed into soda ash or bicarbonate of soda.

Another impact was the blasting of land for construction material. Communities around Nairobi said that this caused tremors, sometimes causing buildings to crack.

Floods have been a major challenge. To avoid cutting through the railway embankments, contractors rerouted natural surface water flows (such as streams) to the underpasses.

But this led to increases in the volume and speed of the water flow which caused flooding and soil erosion. This was compounded by the clearing of surrounding vegetation, which would usually slow water down.

In addition, silt from construction led to the blockage or drying up of rivers, notably the Empakashe and Mbagathi rivers around Nairobi. Most communities in these areas rely on the rivers for domestic consumption, watering their livestock and irrigation agriculture.

Another concern was oil spills. These occurred due to fuel transport accidents and because of train and railway maintenance activities.

For instance, local officials in Kibwezi County said that an oil spill polluted the Thange River. Now the river can’t be used for irrigation or domestic purposes. The land in the affected area is still unsafe for cultivation.

Noise pollution was also reported during construction and operation of the railway, particularly in the areas around Nairobi and Voi. Some communities were unable to sleep and school classes were disrupted due to the noise levels.

Dust pollution was an additional challenge. There were reports of coughs and chest pain.

Communities relying on wetlands and rivers in Voi, Kibwezi, Tuala and Narok areas lost access to some of these critical resources, and the long-term prospects are unclear.

An additional impact of the railway was the emergence of illegal activities, such as grazing in protected areas.

Officials of the Kenya Wildlife Service observed that:

local communities {were} using the underpasses to pass their livestock through to Tsavo National Park particularly around Buchuma gate.

The livestock incursions resulted in serious soil degradation in the southern part of Tsavo East.

Wildlife was also affected. About 120km of the line traverses through a key wildlife area, Kenya’s Tsavo National Park.

We learnt that elephants displayed early signs of behavioural modification. This included aggression and avoidance of the railway area.

These are consistent with behavioural adaptations observed among other species which shift their home ranges or alter their movement patterns due to infrastructure.

Linear infrastructure projects like the railway must develop sustainable and ecologically sensitive measures to mitigate these impacts.

For example, underpasses must be at the right density and of the right size. At present, the underpasses are few and are located in areas not used regularly by wildlife.

In addition, water courses should be channelled and redirected to avoid flooding.

Furthermore another full assessment, involving all stakeholders, is needed of the environmental impacts of the railway. This is key to designing a sustainable railway. It must ensure that development gains are maximised while the ecosystem impacts are minimised.