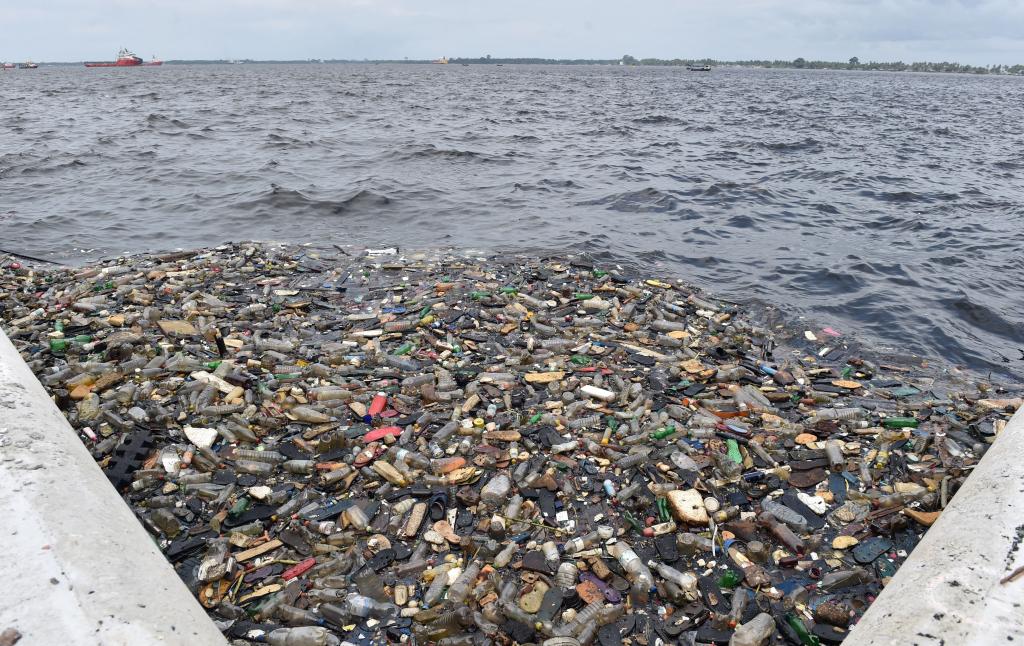 Plastic bottles and other waste are some of the contaminants destroying the oceans. Photo: Issouf Sanogo/AFP via Getty Images

The natural resources that form ocean ecosystems can play a significant role in the socio-economic growth and development of nations.

West Africa has a variety of marine and coastal ecosystems, found within the Atlantic Ocean. This is one of the most diverse and economically important fishing zones in the world and provides an income for many through fishing, shipping, logistics and mining.

But unregulated and unsustainable exploitation has degraded the ecosystems severely. Threats have come from land based sources of pollution, insecurity and piracy, illegal and harmful fishing practices and climate change.

These multiple stressors have had a negative impact on the ecological integrity and health of West Africa. They are causing an alarming decline in fishery resources, loss of coral reefs and seashells, coastal erosion, ocean acidity and rising sea levels.

For over 20 years I have worked as a marine biologist, conducting numerous studies on the Nigerian coastal waters. In this period, I have seen the impact of natural processes and human development.

It is vital that scientists like myself highlight the biggest challenges that West African nations must focus on to save the ocean.

The ocean produces over half of the world’s oxygen and absorbs 50 times more carbon dioxide than the atmosphere. Its health is key to survival.

Millions of tonnes of plastic leak from land-based sources into the oceans yearly.

The pollution of marine ecosystems in the Atlantic Ocean and Gulf of Guinea by plastic and associated contaminants has adverse effects.

In a recent study, we showed how ingesting plastic fragments affects crabs. We explored the implications for food safety as well as the growth and productivity of marine resources.

There is an urgent need to effectively manage plastic waste, replace single-use plastics and introduce plastic-free alternatives in West Africa.

Exploration and exploitation of petroleum resources in oil-rich countries like Equatorial Guinea and Nigeria is another big threat. It has led to leakage of crude oil and petroleum products and discharge of untreated waste and chemical into marine ecosystems. These substances are a major source of potentially toxic heavy metals in the ocean.

In a recent study, we reported high concentrations of heavy metals in tissues of edible aquatic snails (gastropod). This has implications for the health of human consumers if there is eventual bioaccumulation and biomagnification.

The regular use of chemicals in cleaning operations at ports can introduce certain trace elements which ecosystems can’t deal with.

Monitoring and prevention of these risks must be improved.

The extensive theft of local fish by foreign trawlers has left communities poorer.

The unregulated and continuous exploitation of local fisheries has resulted in overfishing of over 50 per cent of fisheries stock. Reports show that once abundant fish species like blue fin tuna are increasingly endangered. Illegal, unreported and unregulated fishing costs West African nations’ economies up to $2.3 billion annually.

Conservationists advocate creating expansive marine reserves to protect the biodiversity of the oceans.

Ocean acidity or ocean acidification is a reduction in the pH of the ocean over an extended time. It is caused by uptake of carbon dioxide (CO₂), a greenhouse gas emitted by human activities. The ocean’s average pH is now around 8.1, which is basic (or alkaline). But as the ocean continues to absorb more carbon dioxide, the pH decreases and the ocean becomes more acidic.

This has contributed to the loss of corals on a global scale as their calcium skeletons are weakened by more acidic water. This also erodes and affects the formation of shells of shellfish.

It has thus brought changes in relative species dominance, potentially leading to ecosystem shifts in coastal waters of West Africa.

Invasive species of plants, animals and microbes are among the greatest threats to the world’s oceans. Shipping and maritime activities are responsible for most accidental species translocation globally. Over 80 per cent of the volume of international trade is transported by sea. The percentage is even higher for developing countries, including Nigeria, which has a coastline of about 852km.

Ship ballast water (held in ships for stability) is a principal vector. It aids the spread of toxic phytoplankton and occurrence of algal blooms that produce toxins harmful to aquatic animals.

The spread of the invasive South American water hyacinth, Eichhornia crassipes, for instance, is damaging transport links in Nigeria’s economic capital, Lagos. It forms a thick mat that impedes navigation and halts fishing.

There are moves under way to tackle these threats. Four protocols have been adopted by 22 parties to the Abidjan Convention:

Through awareness campaigns, ordinary people can learn 10 simple things they can do anywhere and anytime to help save the oceans.

Coastal states in the West African sub-region where the maritime sector is critical to the economy should lead the transformation for a more resilient and sustainable ocean through the blue economy.

The blue economy promotes economic growth, social inclusion and preservation of livelihoods, while sustaining the environment.