Trailing giants: Clues to how people and giraffes can thrive together 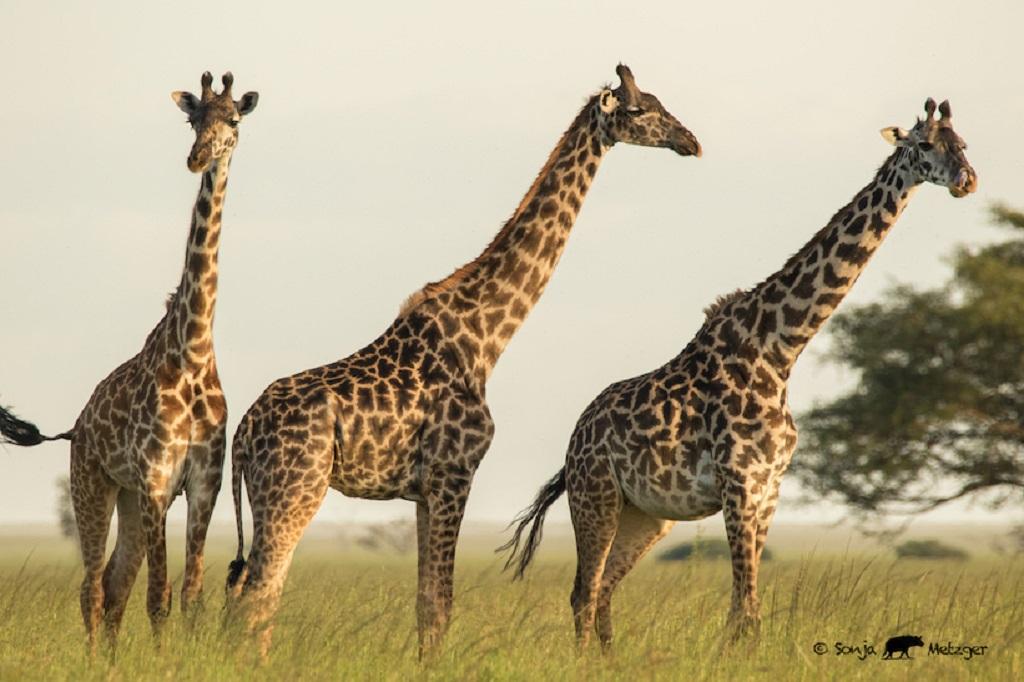 The giraffe (Giraffa camelopardalis) is an iconic megaherbivore whose populations are declining across Africa, the only continent where they are found. Giraffe numbers have plummeted from an estimated 150,000 in 1985 to fewer than 100,000 today.

Like many species of African wildlife, giraffes face numerous threats. The biggest threats are hunting for bushmeat markets and loss of habitat due to deforestation and the spread of farms.

Giraffes shape and sustain healthy ecosystems. For example, woody plant spines, such as thorn trees, are a response to giraffe browsing. Giraffes are also a big attraction for tourists.

The best way to reverse giraffe population declines is to monitor individual animals and learn why they do better in one place over another. This helps to pinpoint threats and evaluate conservation strategies, such as how the presence of people influences giraffes and whether community conservation areas work.

Fortunately, giraffes are a good study species for this type of research. Each animal has a unique and unchanging spot pattern for its entire life, like a human thumbprint. Giraffes can therefore be easily identified from photographs without any need for dangerous captures.

In 2011, my colleagues and I launched the Masai Giraffe Project to learn what helps and what harms giraffes, and how people and giraffes can thrive together. Although the giraffe is still considered a single species, genetic information suggests there may be three species with Masai giraffes a separate species.

The Masai Giraffe Project is a partnership between the Wild Nature Institute, the University of Zurich, Pennsylvania State University and the Tanzania Wildlife Research Institute. It has become one of the biggest studies of a large mammal, with nearly 3,000 individuals identified in a vast, 4,500-km2 area of the Tarangire ecosystem in Tanzania.

The Tarangire ecosystem features two distinctive types of human settlements: towns – whose inhabitants include farmers and bushmeat poachers – and small, traditional homesteads, inhabited by members of the livestock-keeping Maasai community.

We revealed that survival of giraffes is influenced by how close they live to towns. Adult female survival was higher within national parks and community-based conservation areas, away from towns which brought them closer to farming and poaching. These results were not surprising, but we were encouraged to also discover that traditional homesteads are compatible with giraffe conservation. They were even a benefit to mothers with small calves.

Our findings help wildlife authorities understand where and why giraffe numbers are stable, increasing or declining.

A future in the balance

Our study area includes two national parks, a large cattle and ecotourism ranch, two community-managed wildlife areas as well as unprotected lands with towns and traditional homesteads. The entire area has no fences so giraffes can roam freely around their large home ranges, which average about 130 hectares.

The giraffe’s habitat outside the parks is affected by human activities which include farming, charcoal making and livestock. Giraffe habitat throughout Africa has become similarly fragmented. Thus, our study area is representative of the diversity of threats and conservation opportunities facing giraffes.

We found that the probability of adult female giraffe survival was higher in protected areas than less-protected areas where poaching for bushmeat markets was prevalent.

We also learned that community-based conservation is helping giraffes. For instance, the survival rates of giraffes in community conservation areas adjacent to national parks improved. These areas also had higher giraffe population densities than outside the protected zones.

In contrast to adult giraffes, survival of calves was lower inside protected areas where predator densities are highest. However, the seasonal presence of migratory wildebeests and zebras attracted predation away from giraffe calves. This means that conservation of giraffes requires the safeguarding of all the other animals in the savanna.

One of the most promising results from our research is that some human lifestyles seem to be more compatible with giraffe conservation. Most giraffes tended to avoid human areas altogether, however giraffe mothers didn’t always. They stayed far from towns but actually preferred to be closer to traditional homesteads.

We discovered that female giraffes living near traditional homesteads had weaker social relationships, but this did not reduce their survival. Closer to towns, adult female giraffes had lower survival and their home ranges were larger in size. This indicated that they had to roam farther to evade poachers and obtain necessary resources, like food and water.

Giraffe mothers were more likely to be found near traditional homesteads where predators on calves – like lions and hyenas – were fewer. This was probably due to pastoralists eliminating predators and disrupting predator behaviour to protect their livestock.

Our 10 years of research on giraffes in a human-natural landscape revealed constructive ways forward for giraffe conservation. Livestock-keeping and farming people have different influences on giraffes, yet both have important roles to play in saving giraffes from extinction.

We can help the tallest of the megaherbivores by giving them enough living space in the savanna. By limiting habitat loss and expanding community-based conservation areas, and eating livestock rather than bushmeat, we can ensure a future where both humans and giraffes will thrive.