After the last tree is felled

'Sustainable development' cannot afford to be another epithet in the lexicon of development, but should dispel myths about human-made and natural capital 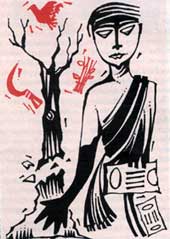 Sustainable development builds on an economic discipline that has changed in content, methodology and major objectives over time. But the question of whether the planet's limited natural resources can continue to support growth and development requirements indefinitely goes at least as far back as the late 18tb century to Thomas Malthus.

Traditionally, economists have been concerned with the efficient use of resources, but rarely worried that some resources may be in short supply, which, if exploited indiscriminately, may become extinct and limit developmental processes. Anil Agarwal, director of the Centre for Science and Environment, New Delhi, has explained the situation persistently: development at the cost of the environment can occur only up to a point; or else the case will resemble that of the foolish man who was trying to cut the very branch of a tree on which he was sitting.

Until recently, the emphasis on exponential growth, mass consumption and uncontrolled exploitation of natural resources and negligence towards the issue of sustainability made us behave like the 'foolish man'. The construction of an intellectual paradigm connecting 'development' with 'environment' is therefore, of recent origin and the integration of these two elements into the concept of sustainable development is even newer.

The term 'sustainable development' was first popularised by the World Conservation Union in its seminal work, Our Common Future. Popularly known as the "Brundtland Commission Report, 1987", it defined sustainable development as "development that meets needs of the present without compromising the ability of future generations to meet their own needs". This definition is no o doubt a very clever one, but not necessarily the clearest one.

But social scientists maintain that there is a closer link between social conditions (say, poverty) and environmental decay. They argue that sustained poverty leads to sustained colonisation and exploitation of natural resources. Some, however, see growth-induced environmental damage in some developing countries as a temporary casualty to poverty alleviation - the key to development.
India's late Prime 'Minister Indira Gandhi once held the view that extremely poor people and very poor countries must make an explicit trade off, accepting short-term environmental degradation to meelt, their more immediate needs for food and shelter. There are 'others who believe that while poverty alleviation and temporary environmental damage may be an important precondition for attaining ES in poorer countries, achievement of poverty alleviation should not necessarily cause environmental damage - short-term or long-term. They argue that poverty can be alleviated even within the existing resource base of a country, given a growth-oriented and an equity-based environment to ensure optimum resource allocation.

Goodland further maintains that one must recognise and expect to "live within the limitations of the biophysical environment". Environmental sustainability, therefore, means that natural capital must be maintained, both as a provider of inputs (sources) and as a "sink" for wastes.

The imperatives of such an integrative and interlinking paradigm are manifold: there will be a need for development of appropriate methodological tools to appraise projects and assist investment and planning decisions by weighing equally the requirements of social, economic and environmental sustainability.

It is quite obvious that Nvith the emergence of sustainable development, there is a definite need to rearrange the institutions, thoughts and practices involving development. The current institutions, public and private, in both developed and developing countries, tend to be heavily oriented towards growth mentality. The world of development, which is often dominated by economists, engineers, bankers and investors, tends to be more keen on maximising short-term profit and inducing high growth.

During the past several decades, the thinking on "development" in developing countries was heavily influenced by major donor agencies, especially the World Bank. The various planning and coordinating-agencies which emerged in these countries to implement these philosophies also received training in appraisal methodologies, investment and screening criteria which treated human-made capital as a scarce resource and natural capital as an infinite resource.

The practice of sustainable development requires a central guidance and inter-agency coordination. With the current emphasis on decentralisation, devolution and divestment, overall sizes of central government agencies in most countries have either shrunk or their relationships with the line and subnational agencies have been drastically weakened.

Presently in mainland China, there are tendencies to divert investments from agriculture to quick and high yielding projects like hotels, consumer industries, chemical factories and housing. Lack of central guidance and weak top-down control seem to be the main reasons for such investments.

To save the situation, there is a need for a strong and coordinating central government to impose disciplines of balanced investments. However, I am also aware that the advocacy of a strong central government for environmental protection runs counter to the development's latest tenet of 'de-regulation'.

I believe that the main threat to sustainable development comes from the cultural front. At this level, it is our ever increasing voracious consumption habits that constitute the main threat to the natural capital. The aspects of consumerism and materialism are post-industrial revolution capitalist phenomena which became an intrinsic aspect of the European or Western culture.

However, with the rise of Eurocentricism, the influence of these other cultures and ideologies either became extinct or, sadly, weakened. It is also noted that the rise of Reaganism which influenced world politics in the '80s, made consumerism, materialism and greed not only the personal and the state agenda in many societies, but interpreted these goals as noble and respectable. International relations and sustainable developm@nt is another least discussed issue. in the absence of an international regulatory framework and also the lack of a watchdog ;rnechanism, quite often, interventions with natural capital in one country tend to go unchecked and unreported.

For example, it has been reported that human-made interventions in upper riparian countries like India and Nepal are seriously affecting the water flow in lower riparian Bangladesh. It has beer@ estimated that since the construction of Farakka barrage p 'n the upper Ganga in India, Bangladesh has become a victim of environmental dislocation with 3 7 per cent of its total area and 33 per cent of the population affected adversely. At an institutional level, the burning problem is to re-orient the current institutions of development. This shift will entail retraining, introduction of new legal and regulatory framework, redefinition of central government agencies' power and their coordinating and consultative linkages between central, local and sub-national agencies including NGos and business communities, and designing new resource allocation methods.

Sustainable development should not be treated merely as another epithet in the lexicon of development, but looked at as a discipline that helps to counterbalance the myth about the capacity of human-made and the limitation of natural capital. An American Indian tribal saying sums this up: "Only when the last tree has been felled, only when the last river has been poisoned, only when the last fish has been caught, only then will you learn that money cannot be eaten"(Plains Sioux, quoted in Goodland, 1995); sustainable development is all about restraining 'the foolish man' from committing these foolish acts.