How current drought is adding to India’s water crisis

The agriculture sector has the biggest demand for water, followed by industries, the power sector and domestic consumption 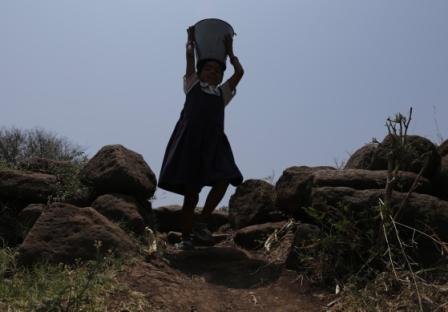 With India experiencing yet another drought exacerbated by scorching heat, one of the most critical issues facing the country is water shortage.

Water is necessary for the survival of all living organisms on our planet. So far, the global as well as the Indian planning for addressing water needs primarily focussed on the need of our society.

But the concept underwent a transition in the 21st century when the concept of “environmental flow” evolved. The idea was to ensure water for all living beings and sustain freshwater and riverine systems.

In India, the agriculture sector has the biggest demand for water, followed by industries, the power sector and domestic consumption.

Shortage of water will invariably prove to be disastrous for agriculture and food security. It will also have serious impacts on the income of sharecroppers and farm labourers.

When it comes to industries, water shortage may affect industrial growth. A recent media report shows that the industrial sector is likely to suffer in terms of production in view of water shortage, especially with water level dipping in reservoirs and dams.

Maharashtra, which is one of the worst hit states, has reduced water supply by 50 per cent to 15,500 industrial units situated in the Maharashtra Industrial Development Corporation areas of the state. Instead of the usual 600 million litres water supply per day, these units are getting 300 million litres at present. The move is sure to affect production.

Water resource management is becoming more and more complicated and is not only restricted to India. In a recent interview, NASA senior water scientist James S Famiglietti, said that 11 of the 17 largest aquifers in India providing water to more than two billion people have passed the “sustainability tipping point”.

In an international study, it was observed that Rajasthan, Punjab and Haryana are losing about 17.7 cubic kilometres of water per year and this is one of the highest rates of groundwater depletion in the world.

According to Famiglietti, the process is continuing and spreading to “other parts of northern India and into Bangladesh”.

Back in 2013, the Government of India announced the setting up of 50,000 groundwater monitoring wells and “embarked upon the ambitious national aquifer mapping programme towards Sustainable Water Management” (Devidayal, TOI, May 1, 2016). However, it what way can this help in regulating water usage across the country remains vague.

In all these vital policies and action-oriented documents, the issue of water features prominently. But India is yet to have one single authority to advise it on regulatory mechanism to ensure optimum use of both surface as well as groundwater.

Currently, the Central Water Commission monitors the water level of selected rivers and the Centre Ground Water Board gives advice on the periodic status of groundwater in different parts of the country.

The state water resource departments remain archaic in their outlook and often work under political pressure rather than on scientific rationale.

For instance, in the Indian Sundarbans Delta, groundwater extraction for irrigation was banned by the erstwhile Left government in critical blocks like Mathurapur 1 and 2.

But after the change of regime in 2011, the order came from the rural development department that power connection should be ensured in these two blocks for use of pumps to draw out groundwater to irrigate lands.

This was done despite stiff opposition from the local gram panchayat. One should know that such an uncontrolled withdrawal of water may lead to intrusion of salt water in this coastal area of West Bengal. But who cares to listen to scientists?

Defying the right advice is continuing while the country is facing one of the severest droughts due to political arrogance.

It is admitted that climate change can create major problems for farmers which is beyond anybody’s control.

A record number of farmers have committed suicide in 2015 and it is still the same in 2016 with 116 of them ending their lives in the first three months.

Maharashtra is notorious for the highest number of farmer suicides with Punjab ranking second in the list with 495 cases in 2015 and as many as 56 cases in the first quarter of this year.

It is either the eternal debt burden or crop failure which drives farmers to such a distressing end. Data from 2014 shows that out of 3,115 suicide cases, as many as 1,163 farmers committed suicide due to the vicious debt trap. The rest ended their lives due to crop failure.

The National Bank for Agriculture and Rural Development is yet to reach out to farmers across India. Agricultural insurance is yet to become a reality despite recent promises. We, the citizens of India, will continue to be astonished after reading the comments of an honourable minister that farmer suicides have become a fashion.

One can still hope for a better tomorrow after reading about the water ATM in a Marathawada village or the revival of traditional water systems in arid regions of Rajasthan. However, in both these cases it is the people who took the initiative.