A farmer in her turmeric field in Dugarpur district, South Rajasthan

Deeply nestled in the rolling hills of the Aravalli range, Mada resembles most villages in the Dungarpur district of south Rajasthan — quiet, green and unassuming.

An unhurried pace of life, centered around a mostly subsistence agrarian economy, the only visible activity in Mada seems to be children in uniform, walking to school in the morning and returning home, around 4 pm in the evening.

The tranquil silence is broken only once in a while by sounds of a passing vehicle, a peacock’s scream or the sonorous bellowing of bovine creatures.

It would seem that nothing could possibly interfere with the ambient rhythms of life in Mada and its surrounding areas. It is pretty much a self-contained universe, or so it appears to be at first sight.

That impression only lasts until one enters the gates of the Jan Shiksha Evam Vikas Sangathan / People’s Education and Development Organisation (JSVS-PEDO). A bright sign saying ‘Mahi Haldi’ greets visitors as they enter the small JSVS campus.

Alongside, large yellow cylindrical machines, some with long and flowing cloth funnels gently shake off bits of turmeric powder with passing gusts of wind. Soon, I learn that JSVS supports a microenterprise that encourages rural tribal communities in building sustainable livelihood practices that emerge from the local natural resource base of the area.

As I settle down for a chat with Devilal Vyas, the founder of JSVS-PEDO, and his wife, Ramila, I discover that their turmeric cultivation initiative not only has a very interesting history, but in its own small but dedicated way, has provided a radical alternative to destructive globalization of agricultural practices in the region.

Mired in poverty and social distress

Up until the early to mid-2000s, Dungarpur district was counted amongst the poorest areas in India. Rampant livelihood crisis, extreme poverty and recurrent droughts were commonplace.

For the most part, tribal communities led a highly deprived, hand-to-mouth existence. Starvation was an everyday reality.

Interestingly, while people in the area could afford nothing more than threadbare clothing, around the same time, the BT cotton seed was introduced in India by the Monsanto Corporation. Its cultivation took off in neighbouring Gujarat, especially among the Patel farmers in North Gujarat, on a very massive scale.

Villages in Dungarpur district, including Mada, saw a massive human exodus flowing into Sabarkantha and Banaskantha districts, among other areas — sowing, watering and nurturing the cotton plants until they were ripe enough to pick.

While the labour regime in cotton was punishing in itself, what made it absolutely inhumane was the rampant use of child labour. Thousands upon thousands of children, some as young as six or seven years, were employed on the farms of Patels, working extremely long hours in heat and adverse weather conditions, picking cotton diligently with their small hands.

This went on unchecked year after year, until JSVS, government bodies and other civil society organisations decided to confront this human and child rights violation head on.

In partnership with Unicef, massive village campaigns, raids and awareness initiatives were held to sensitise communities to take a firm stand against sending children to work in cotton farms, even if it seemed like a way to earn some much required cash.

To a large extent, the campaign against child labour was successful. But it led to quite another unanticipated problem. Adivasis who worked in Gujarat cotton farms had learnt well the methods and ways to grow BT cotton, and in hopes of some bountiful gains and finding stable livelihoods as they could see happening in Gujarat, they began planting it in their own small landholdings.

With alarming speed, BT cotton spread into South Rajasthan, and could be found in almost every Adivasi’s land from 2006-7 onwards. A cash crop that had previously never been grown in these parts, BT cotton spread literally like wildfire in Adivasi areas.

While some with slightly larger landholdings initially benefitted from its cultivation, a greater number were caught in debt. BT cotton required expensive seeds, pesticides, weedicides, fertilisers and assured supply of water.

This invariably meant that hapless Adivasis were caught in the financial clutches of seed company agents, who offered a steady supply of high interest loans and advance monies to keep the cultivation going on without any interruption.

Continued cultivation of BT cotton every year also led to discernable land degradation. Every year, a greater amount of fertiliser, pesticide and weedicide was required to increase chances of a good harvest.

Essentially, costs kept going up every year, while returns remained fixed. It was this dismal situation that prompted a search for alternative forms of livelihood that would provide income, while ensuring sustainability and crop diversity.

This is how turmeric made an entrance into what was beginning to resemble a scarred landscape.

Turmeric was not a strange or new crop for the Dungarpur area. It had very much been present in the fields, but thus far, it was grown primarily for domestic use in small quantities. Given its importance as a high value cash crop that was grown fully by organic methods, JSVS took a leap of faith and in 2011, decided to promote its cultivation and marketing in certain blocks of Dungarpur district.

More than a spice, turmeric was also seen as a way to fight the damaging intrusion of BT cotton while also acting as a bulwark against child labour. As a low investment crop that needed fewer inputs, had much less demand for labour, and yet, promised high income generation, commercial cultivation of Turmeric definitely became an attractive proposition for local farmers.

With the help and support of philanthropic organisations, state agencies and a regional agricultural university, MAHI Haldi, named after the local river, was launched with much expectations and hope. 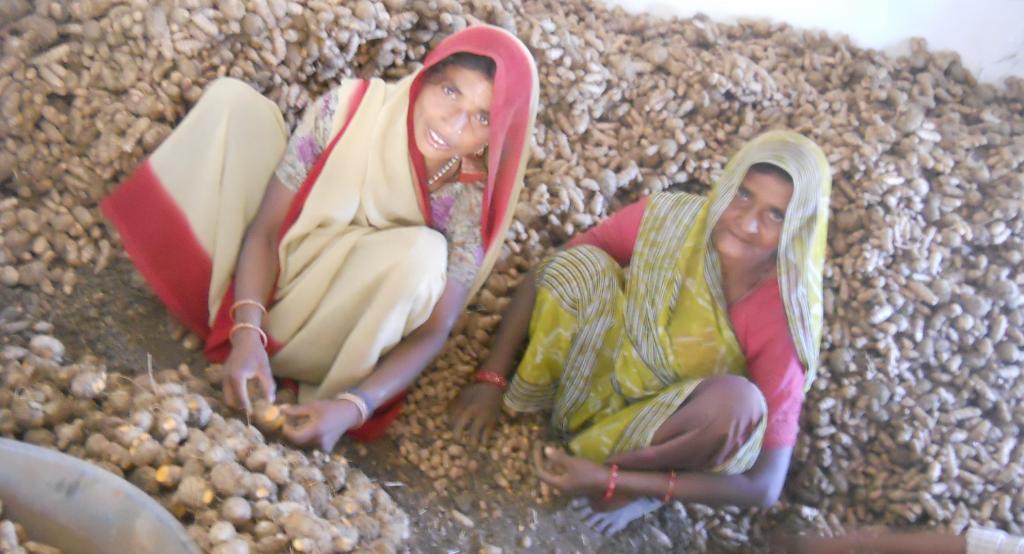 An extensive process of training and mobilising local communities, familiarising them with the scientific and agro-ecological aspects of commercial cultivation such as land selection, preparing the farmland, climatic and seasonal considerations, making sure to use right seeds and availability of proper irrigation took time and strenuous effort.

While the outreach was extended to about 750 farmers in the initial pilot phase, initially, only 50 farmers from 25 selected villages in Bichhiwara and Simalwara blocks of Dungarpur district took up this project and started demonstration plots in about one-third of an acre of land, using seeds from Erode in Tamil Nadu.

In subsequent years, seeds from Erode were cross bred with local seeds from Dungarpur to achieve a superior variety of turmeric. Farmers adopting these seeds saw their output grow rapidly.

From about 34,000 kilograms in the first year, a consistent rise in production took output figures at about one lakh kilograms per year since then. This is certainly an impressive achievement for Adivasi farmers in the area.

JSVS provided full technical and marketing support, with a hundred per cent buyback guarantee of produce, as well as higher buying price at Rs 5 extra per kg, compared to what the market offered.

It also simultaneously mobilised women into becoming participants in this project and set up a Mahila Kisan Initiative that now has a 2,200 strong membership from Dungarpur district alone. Evidently, the cultivation of turmeric has also become a potent tool for women’s empowerment and autonomy, since a majority of turmeric cultivators are now women.

Interestingly, since turmeric is also a crop that allows a mixed cropping pattern, it has allowed them to increase their income manifold. While turmeric requires a 9-10 month long period between seed sowing and harvesting (June-March), women follow an interesting land use pattern.

Turmeric is planted in rows and the clear patches of in-between land are used to plant spices and vegetables like coriander, chillies, lemons, eggplants, spinach and methi sequentially, according to the season. Each of these takes about two to three months to mature, and fetches good market prices.

Essentially, the mixed cropping of turmeric with other spices and vegetables allows a continuous stream of earning and unlike BT cotton, the farmer does not have to wait endlessly for the crop to mature and generate any cash.

The highlight of this system is that it is completely organic and does not use any pesticides and harmful chemicals. Turmeric is also a hardy crop that does not attract pests and has a long storage and shelf life.

The words of Gauri Katara, a woman farmer from Mataji phala of Kanva village in Dungarpur might just prove to be a prophecy for the future. As she says, Haldi aur sabzi ugaane se hamara parivaar sukhi aur sampanna ho gaya (our family has become happy and prosperous by growing turmeric and vegetables).

As someone who has given up BT cotton cultivation for many years now, turmeric has evidently brought a prosperous turnaround, since her family now earns about one lakh rupees in one year.

Organic turmeric cultivation and its impressive results in the Dungarpur area prove that it is eminently possible to build sustainable livelihoods from within locally rooted knowledge and practices. It is not at all necessary to look towards global crops like BT cotton as saviours of the land and its people.

Vandana Swami is a faculty at the School of Development, Azim Premji University, Bengaluru