This is because agriculture in India is largely dependent on chemicals including pesticides and their usage has a huge impact on the health of humans, animals, bio-diversity and the environment

Pesticides are regulated in India through the Insecticides Act, 1968 and Insecticides Rules, 1971. The experience in administering this Act over the last five decades has exposed certain gaps which spurred the need to propose a new law.

Subsequently, a new Pesticide Management Bill was created and same has now been approved by the Union Cabinet on February 12, 2020. This new bill will be tabled in Parliament in this session and the earlier version will be withdrawn by the government.

Insecticides, fungicides and herbicides are used in India, with insecticides forming the highest share. India is among the largest producers of pesticides in the world. According to a report by database Research and Markets, the Indian pesticides market was worth Rs 197 billion in 2018.

The total as well as per hectare consumption of pesticides in India shows a significant increase after 2009-10. The recent increase in pesticide use is said to be because of higher use of herbicides as cost of manual weed control has risen due to increase in agricultural wages.

Trend in consumption of pesticides (technical grade) in India 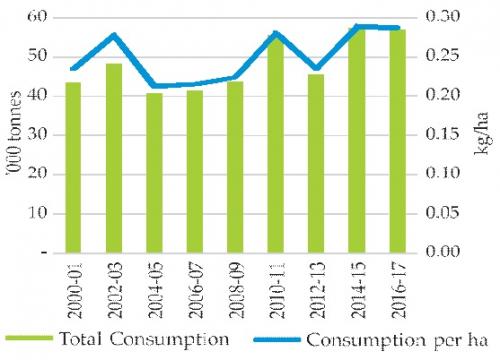 Source: Based on data from Ministry of Chemicals and Fertilizers, ICAR-NIAP

Source: Ministry of Chemicals and Fertilizers, Govt. of India, ICAR-NIAP. Note: NR refers to not reported; *GCA based on 2014-15

The upcoming Pesticide Management Bill is of critical importance, as agriculture in India is largely dependent on chemicals, including pesticides and their overuse and misuse has a huge impact on the health of humans, animals, bio-diversity and the environment.

Instances of acute toxicity of farmers due to pesticides are common and chronic toxicity of pesticides is a big health threat for consumers. The Draft Pesticide Management Bill 2017 had various issues and concerns. Hopefully, these concerns would have been addressed in the upcoming bill.

Focus on minimal use of pesticides

The bill must consider minimising the use of pesticides, recognising the fact that pesticide use is not sustainable. It is a temporary stop-gap arrangement wherein the aim should be to use it as a last-resort.

Not recognizing this would be a critical failure as using pesticides for decades has contributed significantly to the current ecological, economical and existential crisis of the Indian agriculture sector. Promoting pesticides will take India away from sustainable agriculture practices and agro-ecology.

Inadequate representation and powers to the state governments is a serious concern, raised by various state governments as well. There have been several instances, where states (like Punjab, Kerala etc) wanted to ban a particular herbicide like glyphosate in their respective states but were not allowed to do so for a long time.

State governments should have the power to regulate pesticides as they have a better idea about the agro-ecological aspects in their state. However, states need not be given the power to allow a pesticide, which is otherwise not approved by the Registration Committee.

Penalties in proportion to sales needed

Small financial penalty would not be enough deterrence for a big company selling pesticides worth crores of rupees. For instance, a fine of Rs 100,000 to 500,000 for selling misbranded pesticides will not deter an industry giant in the business of manufacturing pesticides.

Even a penalty of Rs 10-50 lakh proposed for certain cases may not be deterrent enough. Financial penalties should be proportional to the value of total sales of the concerned pesticide in India. It should not be based only on annual turnover because the damage may not be limited to one year.

Pesticide promotion must not be allowed

Just like pharmaceutical drugs, pesticides due to their hazardous nature, must not be allowed to be promoted. All kinds of advertisements of pesticides must be banned in India.

Advertisements are by design suited to the commercial interest of the advertiser and aimed at influencing the buying behavior of farmers, who are often uneducated and unaware of the marketing tactics.

Class I pesticides should be banned

Prior to August 2018, around 18 Class I pesticides were allowed in India; few of them were used heavily and accounted for about 30 per cent of the total pesticides used in India. These have also been banned for use in several countries.

In August, 2018, the MoAFW banned 18 pesticides, three years after the recommendations of the Anupam Varma Committee. But, it left out two heavily-used Class I pesticides: Monocrotophos and Carbofuran.

Deaths related to pesticide poisoning in India are common. In 2014, the National Crimes Records Bureau recorded 7,365 cases of poisoning due to accidental intake of insecticides / pesticides, out of which 5,915 died. In 2015, 7,060 deaths were reported out of 7,672 cases.

Farmers must be made aware of judicious usage

Pesticides are hazardous chemicals with multiple, severe and even fatal, acute as well as chronic toxic effects. They must be sold and used cautiously under supervision like drugs.

Like drugs, target, dosing, mode of application and unbiased advice for the usage of pesticide is critical. Over the counter availability and dealer influence have caused severe overuses and misuses. Therefore, proper provision should be made to increase the knowledge of farmers by competent unbiased people.

The bill must incorporate a provision which makes it illegal to sell a pesticide by a pesticide company without personal protective equipments or safety gear. Provision of systems and standard operating procedures for acute medical emergencies should also be made.

The Polluter Pays’ principle should be the basis for fixing liability and compensation from the company. Any pesticide registration must follow transparent assessment procedure.

Further, legislative powers to regulate pesticides should be transferred to the Union Ministry of Health and Family Welfare from the MoAFW, to address the health-related concerns without any conflict of interest.

Today, there are enough well-proven, successful alternative agro-ecological methods of pest management without using any chemical pesticide in India and globally. Such methods must be mainstreamed and promoted among farmers.

Lessons learnt from successful farming community initiatives like Keet Sakshatra Pathshala, Jind, Haryana and Non Pesticide Management Programme implemented by Andhra Pradesh and other successful alternative approaches should be identified and mainstreamed. Further, research and innovations must be made to phase out the usage of chemical pesticides completely as soon as possible.