Why the attack on Kashmir's pastoralists is a big concern 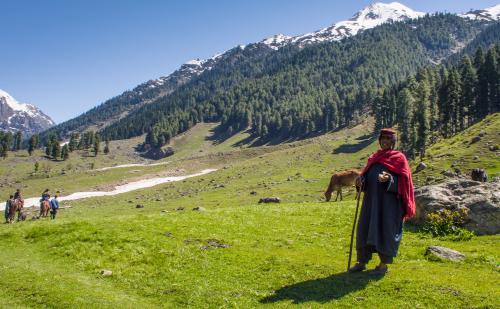 On April 22, 2017 in Talwara, a small village in the Reasi district of Jammu and Kashmir, a group of Gau Rakshaks armed with iron rods and lathis attacked a family of Bakkerwals, a traditionally nomadic pastoral community of herders from the state, who are a part of the larger Gujjar community (slotted as a Scheduled Tribe in Jammu and Kashmir). They beat them up ruthlessly. Nine members of the Bakkerwal family, including a woman and an elderly man, were injured in the mob attack.

The nomad family had in their possession, a herd of cows, sheep and goats. The Rakshaks alleged that the animals, especially cattle were being smuggled for the purpose of slaughter. After having beaten up the Bakkerwal family, they then snatched and took away the entire flock.

A video of the same incident has gone viral across India, prompting police to initiate action against the culprits.

A way of life

I do not know whether the Rakshaks knew it or not but the nomads were doing nothing wrong or against the law of the land.

Gujjars (and Bakkerwals) in Jammu and Kashmir are different from those in the plains further south. Not only are they Muslim by faith, but also practice nomadic pastoralism. For centuries, they have reared cattle, buffaloes, sheep, goats, camels and horses to earn their living.

Everyone in the state of Jammu and Kashmir is aware that the nomadic Gujjars and Bakkerwals practice the age-old tradition of seasonal migration. They travel bi-annually along with cattle and other livestock towards the upper reaches of the Shivaliks, the Pir Panjal and the Trikuta hills of the north-western Himalayas in summer and stay there for six months a year while the sun rains fire in the plains below. In October, when temperatures begin to cool, they start migrating back towards the lowlands.

The Gau Rakshaks are the latest addition to the Gujjars-Bakkerwals’ cup of woes. In the past, their seasonal migrations have been affected by the ongoing strife in the state of Jammu and Kashmir. The migrations were halted in several areas due to militancy, firing at the Line of Control and international border, in forests and on government lands. Many Gujjars have relinquished the “migratory tradition” of their nomadic lifestyle over the past few years in Jammu and Kashmir due to such incidents. There is a great apprehension that the tribal migration will become a history of the past in the next few decades.

The community has also experienced extreme adversities due to their very rough lifestyle, and lack of economic freedom owing to deficiency of resources.

The tribal Gujjars have struggled to get government help in order to enhance their standard of living. As per the 2011 Census, the Gujjars (including the Bakkerwals) constitute more than 12 per cent of Jammu and Kashmir’s population. Around 0.6 million people who are nomadic, move after every six months with their livestock and undertake seasonal migration.

The Reasi district, where the incident occurred, has a tribal population of 28.1 per cent, with Gujjar-Bakkerwal tribes numbering around 88,365 out of atotal population of  31,4667 as per the 2011 Census.

Though Gujjars are considered to be Scheduled Tribes in Jammu and Kashmir, they are not treated at par with other tribes of India. In presence of Article 370, which grants special status to Jammu and Kashmir, Indian laws concerning tribes are not implemented in the state directly. As a result, Gujjars are still fighting for the rights available to other Indian tribes including political reservation for Scheduled Tribes, extension of the Forest Rights Act, 2006, Forest (Conservation) Act, 1980, SC/ST (Prevention of Atrocities) Act and other similar Acts which empower tribal groups. Encumbered with a number of issues and being landless in the state, they are demanding rehabilitation through allotment of land by the government. Besides, illiteracy, poverty, militancy and stigmatisation of the nomadic Gujjars by other groups are the main issues of the community.

Rising Intolerance in the Jammu region

This then is the state of affairs of Jammu and Kashmir’s Gujjars. And into this potpourri have come the Gau Rakshaks.

For last few years, the Jammu region has been witnessing an abrupt increase in cases of attacks on Gujjars. The nomadic groups who mainly migrate via roads are regularly harassed in some localities if they are travelling with cattle, buffaloes or camels during the course of the annual migration that starts in April every year.

After the Reasi incident, the Gujjar community circulated an appeal to the people of Jammu to uphold the region’s age-old traditions of tolerance towards nomads and their animals. They said the nomads were already in trouble due to tremendous pressure and were looking for help from all quarters purely on humanitarian grounds, to practice their livelihood.

In their appeal, the Gujjars stated that they protected their animals like their own children so the Gau Rakshaks, the supposed protectors of cattle need not worry. They called on some Hindu elders in the Hindu-dominated districts of Jammu, Samba, Kathua, Reasi and Udhampur and made an appeal for strengthening of old practices.

Police authorities in the Jammu region have advised nomads not to travel at night and have directed their officials to provide them protection when they move from one place to another. Police have asked nomads to travel only in the afternoon.

While law-enforcement agencies can play a role in rebuilding confidence among nomads and bridge the gaps between communities, if things do get worse, it would sound the death-knell for a centuries-old way of life.