It seemed more like a “no parking day” in the city 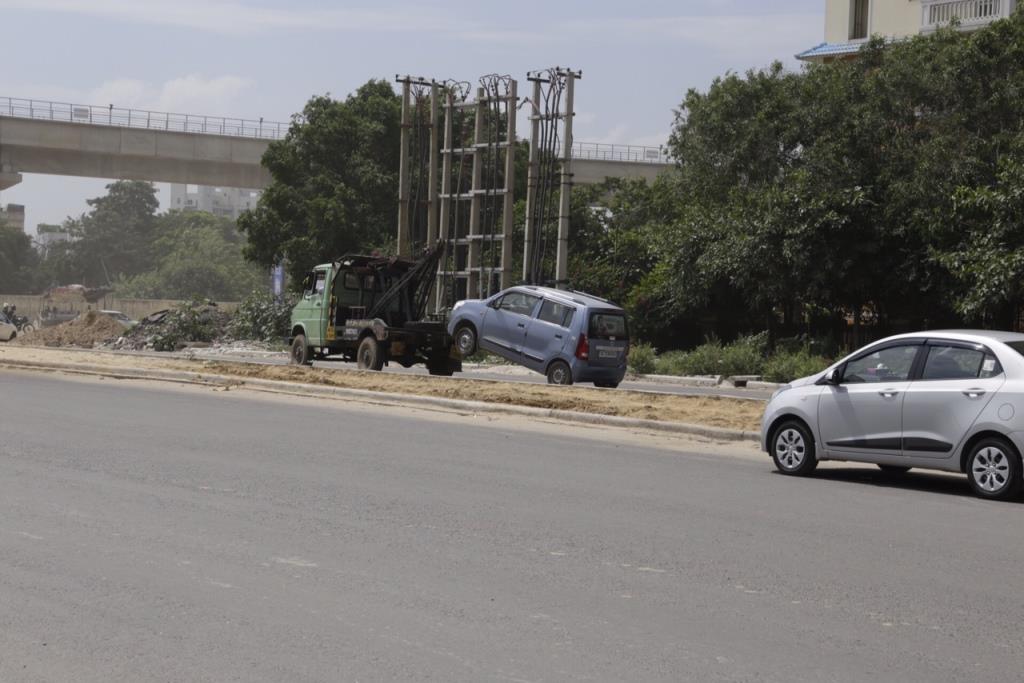 Frankly, I was taken aback by the incredulity of my colleagues – you guys cycled from Gurgaon! I guess this sounded like a madcap idea given that every week, two cyclists die of accidents in Delhi. The occasion was the “car-free day”, declared in Gurgaon. My colleague and I thought it would be a good exercise. We had also invested heavily in fancy geared bikes that were gathering dust and were on many occasions nearly OLX-ed.

We started at 6:45 in the morning, and soon hit the “dedicated” lane from near Subhash Chowk, but we chose, sensibly, not to use it. We couldn’t, with the little glass shards and pebbles that can puncture your tyres; the layer of dirt and rubble that can cause you to skid badly; the piles of early morning collected trash you need to maneuver around; and the overhang from the un-pruned trees by the roadside that can slap you in the face. It seems so difficult to secure the roadsides for cyclists or pedestrians. We didn’t see a single cyclist use the dedicated walking and cycling track made along the Gurgaon-Mehrauli road. The space was instead taken up by parked cars, buses and trucks, by construction material, advertisement hoardings, or was dug up for repairs. And who thought of the the crazy idea of using cement tiles for laying the path? Cyclists would at all costs avoid the bumpiness of this ride.

Some relief, but chaos prevails

Today’s event is actually a “no parking day”, not “car-free” day. The theory is that severely restricted parking is an effective car restraint measure. Not today, apparently. Reports are coming in of the usual traffic jams and chaos. We saw cops jump at anyone trying to park vehicles on the roadsides. What’s not clear is whether parking is being allowed on the service lanes. A large car parking area has been set up at Leisure Valley park, the venue for many public rallies and mass-events, like Ramdev’s yoga shivirs.

I guess the unstated assumption is to get car owners to go to places without their personal car, and use public transport, cycles, anything but the car. And this time, there are many options. “Shuttl”, the app-based transport startup by two former Jabong.com executives, will provide regular bus runs from various parts of the city to Metro stations and office areas. Other forms of para-transit are to be made widely available.

Two hours and fifteen minutes from our homes near Sohna Road in Gurgaon to our office near Batra Hospital in South Delhi. Not bad. We could’ve been faster, but we were enjoying the little encounters en route.

I don’t know if anyone else has noticed this, but buses and trucks are kinder to cyclists than private cars and SUVs. Is it because a truck or bus driver will cycle home at the end of his duty, and has more empathy for a cyclist? As a car driver myself, I recognise such aggression and bratty road manners. India accounts for 11 per cent of the global road injury deaths each year. As a cyclist, I will have to rein my aggression in, or I’ll end up eyeballing every little traffic transgression.

In the end, it’s the little things that you notice when cycling–the urban landscape, unframed–even if for a short while. The immediacy of experience, the un-insulated feel of the road and of your surroundings. The random conversations you strike up with co-travellers at water stops, who marvel at our geared bicycles, but smile at our helmets and gloves. Or the impromptu racing with kids in the spirit of cheeky competition.

Street-side encounters are humbling, by showing up the contrast of a much vaunted one-off recreational outing, versus the daily 20 km commute of the 60-something security guard on his creaky Atlas Goldline, sans helmet or gears. That’s endurance, born out of necessity. I just hope that a car-free day or road re-design project meant to separate office commuters from their cars will help him too.