Leaving Delhi for a less-polluted city would mean accepting defeat. And not many have the option. Instead, we must fight the battle against air pollution. 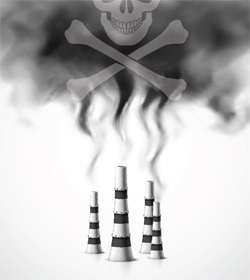 I do not know how best to respond to this question. These days, concerned about the toxic air of Delhi, many parents, particularly those with children who have asthma, ask me if they should leave the city. Many times, I am also told that they have decided to move away; they cannot take it anymore. It is a no-brainer, you would say. After all, Delhi is very polluted and we know from all evidence that air toxins are deadly for our health. There may not be any comprehensive epidemiological study, which conclusively shows how growing air pollution in Indian cities is adding to health burden, but there is enough to tell us that things are bad. Only the most diehard polluter—a manufacturer of diesel vehicles, for example—would argue that the current level of air pollution in Delhi is not hazardous for our health.

This past winter, in November, December and January, air was classified as “severely polluted” for over 65 per cent of the days. According to the government’s own air quality index this would mean pollution is so bad that it would cause “respiratory effects even on healthy people”. So why am I troubled in saying that yes, they should leave the city? After all, their health is at risk.

One, I realised, painfully, that it would mean accepting defeat. It was in the mid-1990s that we started work on clean air. Then, unlike now, people did not even see the connection with our bodies. When we said tiny particles, emitted from diesel vehicles, could be carcinogenic, a leading automobile manufacturer slapped us with Rs 100 crore defamation suit. But courts and governments worked to take decisive and difficult action, and pollution was checked.

Now we are back to where we started. Pollution is rising; governments are scrambling to deny the obvious and it is clear that this second-generation reform is much more difficult. All the easy pickings—if you can call the contested transition to compressed natural gas (CNG) in vehicles easy—are over. Now the answer is to restrain the growth of cars and build convenient and modern public transport system so that even the rich do not use their vehicles. Now the answer is to drastically improve the quality of fuel and technology used in trucks or find ways for them to bypass cities. Now the answer is to find more CNG to use in industries and to ensure that there is tight enforcement of rules from institutions that have been whittled away deliberately. All this is difficult. More difficult than before. So, should we give up? Decide that it is impossible to do anything?

But then, I think of how Anil Agarwal—Centre for Science and Environment’s founder—had reacted to the news of his own cancer. He investigated cause and found clear links with contaminants like pesticides. “My story today your story tomorrow” was his poignant rallying call for bringing change in the way we spray our food with poison. Just before his death, he set up India’s first public laboratory to test contaminants in our everyday life. Since then the tests done—from pesticides in soft drinks and Punjab farmer’s blood to antibiotics in chicken—have brought home the fact that we need to reduce our exposure to toxins. And even though much more needs to be done, it is good to know that Agarwal’s fight has not been wasted. So, leaving should not be the question. How to fight and win this battle against pollution should be.

Secondly, where will you go? The fact is that most of India is getting equally polluted—air is equally foul but it is just not monitored. This is the difference between Delhi and other cities. Other cities also have everything going for pollution cocktail—growing number of diesel vehicles, poor public transport, weak surveillance of polluting factories and poverty that forces people to burn biomass instead of cleaner cooking fuel. So, where will you run away to?

This is the same when we believed that the answer to fighting pollution was to buy air purifiers. But the fact is that purifiers can clean only up to a limit and not all pollutants. Besides, we have to breathe common air sometime. Yes, if you are rich you can install it in your house to protect yourself and your children from the worst of the harm. But it is not the answer because not everyone is rich enough to use one. The answer is to clean the air.