Diesel vehicles, in the name of 'mild hybrids', are cornering a huge portion of the funds allocated for promotion of electric mobility in India 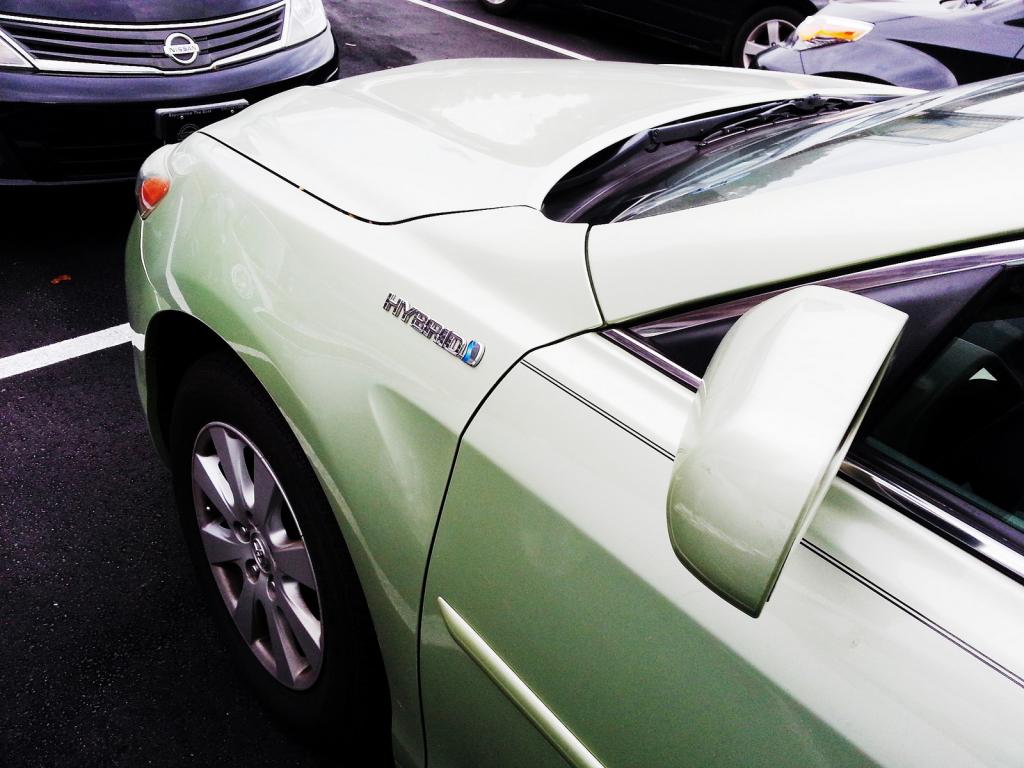 Mild hybrids are much cheaper to manufacture and have very little savings in terms of fuel efficiency. Credit: Listener42/ Flicker

On March 30, the Ministry of Heavy Industries and Public Enterprises notified a crucial amendment to the FAME (Faster Adoption and Manufacturing of Hybrid and Electric Vehicle) programme. Under the new amendment, “mild hybrid” cars would no longer be eligible to get incentives under the FAME programme aimed at promoting electric mobility in the country.

This amendment was made on the back of a public campaign by the Centre for Science and Environment (CSE). The CSE had earlier raised an alarm on this practice of pushing diesel-driven mild hybrid cars as electric vehicles.

So, what are ‘Mild Hybrid’ cars and why do they pose such a problem?

The Ministry of Heavy Industries and Public Enterprises (MHIPE) defines ‘Mild Hybrids” as “those that have minimal application of electric energy and use regenerative braking power only to assist the motor to start from the stationary position”. These vehicles cannot run on electric power alone, since they have no electric drivetrain. In other words, their character as hybrids is severely limited. Real world examples include Maruti Suzuki Ciaz and Mahindra Scorpio Micro Hybrid.

What is a strong hybrid vehicle?

Such a vehicle may have a provision for off-vehicle charging and has a rechargeable energy storage system, including an electric drivetrain. There exist two kinds of strong hybrids, as per the sources of energy they use.

The first category of strong hybrid vehicle is the one with a petrol- or diesel-driven engine that charges the rechargeable energy storage system when in operation. This energy storage system has an electric drivetrain, which is capable of running the vehicle by itself. Examples of this kind of hybrid vehicle in India are Toyota Camry and Honda Accord.

The second is a plug-in hybrid which allows you to charge your rechargeable energy storage system with an off-vehicle source—a wall-mounted electrical plug point. A plug-in hybrid also has petrol- or diesel-driven engine, but off-vehicle recharge capability extends range of the vehicle when operating solely on the electric drivetrain. Examples of this kind of hybrid in India are Toyota Prius and Volvo XC90.

Any of the two categories of strong hybrids with electric drivetrains allows more significant fuel and emission savings.

The inclusion of 'mild hybrids' in the FAME programme, which are much cheaper to manufacture and have very little savings in terms of fuel efficiency—only 7-15 per cent more than comparable conventional diesel models—was only fanning dieselisation at the cost of public health. Apart from this, proliferation of mild hybrids did not allow the much bigger improvement in fuel efficiency that would have been possible—as much as 32 per cent, from the transition to strong hybrid cars and 68 per cent for fully electric models.

Additionally, it posed the risk of creating a false perception of success of the FAME programme and the push for electric mobility.

Looking at the numbers

So far, under Phase I (April 1, 2015 to September 30, 2017) of the FAME programme, a total of Rs 151.56 crore has been claimed by all the categories of electric vehicles sold in India that are eligible under FAME. The total number of electric vehicles, including mild hybrids, sold under FAME in this period (up to February 28, 2017) has been 111,897. Of these, 73,633, or 65.8 per cent of the vehicles incentivised have been mild hybrid four-wheelers (See graph 1). Within the category of four-wheelers, mild hybrids make up for 95.85 per cent, having a lion’s share of the amount allocated. 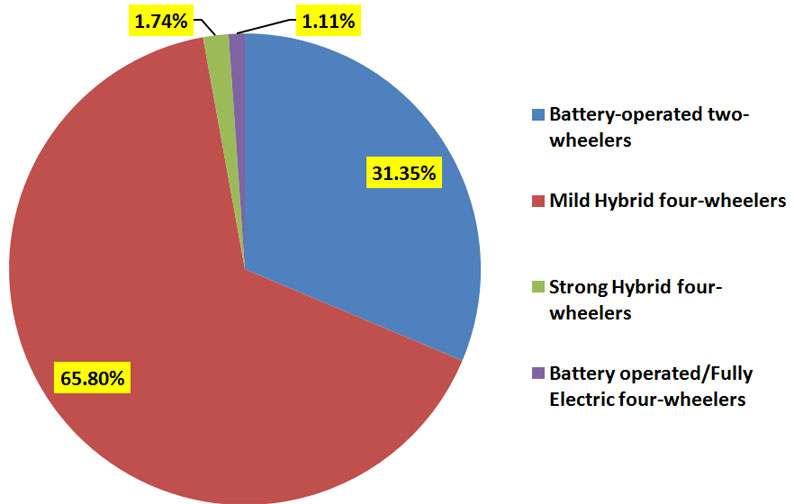 What benefits did these mild hybrids accrue under various policies of the Centre?

Under the FAME incentive scheme, the consumer purchasing a mild hybrid vehicle received a subsidy amount ranging from Rs 13,000 to Rs 23,000. Apart from this, in the Budget 2015-16, the Centre announced an excise duty benefit on ‘electric and hybrid vehicles’ and also components. Under this move, the excise duty on battery-operated/fully-electric four-wheelers was dropped from up-to[1] 30 to 6 per cent, and on all hybrid vehicles (including mild hybrids), it was dropped to 12.5 per cent.

In case of the highest selling mild hybrid model, Maruti Suzuki Ciaz, the total benefits equalled a subsidy of Rs 13,000 and an additional excise benefit of 11.5 per cent (applicable rate for other mid-sized passenger sedans is 24 per cent), which equals a total benefit ranging from Rs 87,000 to around Rs 100,000, as per various industry estimates. These benefits have been passed on to the consumer, in the form of a competitive price tag for Maruti Suzuki Ciaz in comparison to its main competitors.

The results are evident, in terms of increase in sales of the diesel mild hybrid variant of Maruti Suzuki Ciaz. In January 2016, 5431 units of Maruti Suzuki Ciaz were sold, in comparison to its main competition and segment leader[2] Honda City, which had sold 8037 units in the same month. Due to misplaced excise and FAME benefits, by May 2016, the monthly sales figures of Ciaz had overtaken those of the Honda City (See Graph 2). 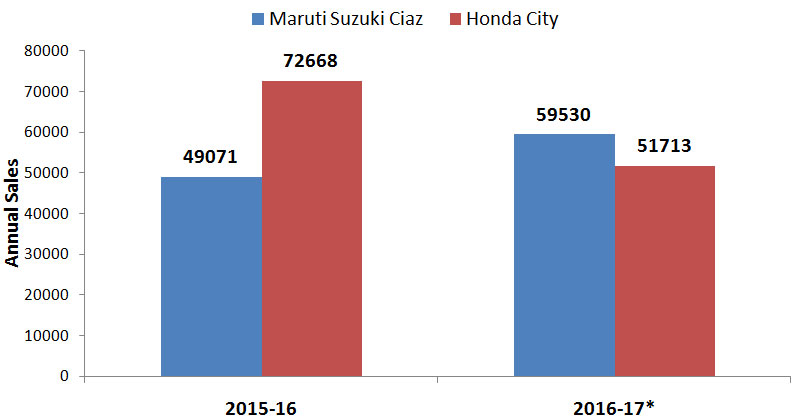 The benefits accrued by these diesel vehicles in the name of 'mild hybrids' must be analysed against the backdrop of the measly 7-15 per cent savings in terms of fuel efficiency. In 2015-16, manufacturers such as Hyundai, Mahindra and Maruti Suzuki have announced their intentions to make more of these mild hybrid variants of their existing models. Worryingly, SUV makers have also announced their intention to avail of the excise and FAME benefits to introduce cheaper vehicle variants in the markets.

These mild hybrids are cornering a huge portion of the funds allocated for promotion of electric mobility in India, and although the amendment in the FAME programme removes them from the incentive programme, they continue to receive huge benefits under the excise exemption. The government must make its stand on mild hybrids clear, by clearly defining “Hybrids” and “Electric Vehicles” under the Motor Vehicles Act. Only when this is done, will there be clarity on which variants of “hybrids” will benefit from the government’s policies to promote electric mobility.