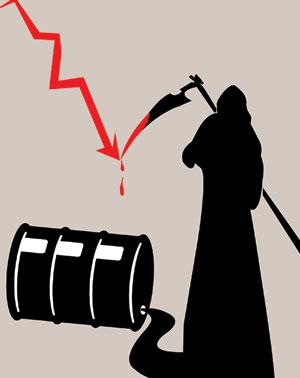 Policy can be perverse. This much we know. What we should be amazed about is how policy can be counterproductive, retrograde and deadly, but still remain undisclosed and undiscussed. But what am I ranting about, you would ask? Allow me to take you through my journey over the last few months, all to unravel a key cause of air pollution.

Some months ago, sitting in a meeting of solar energy entrepreneurs, I heard them say that concentrated solar power (CSP) plants were not viable. But why? After all, solar prices have crashed and government is keen to subsidise and incentivise this growth of clean energy. Yes, solar prices have crashed, but so have prices of oil, and today, cheap furnace oil (FO) use is growing. FO is a bottom of the barrel product—it is the last grade of oil that refineries produce; it is high in sulphur and so is highly polluting. This issue rankled me as Delhi slipped into its worst pollution episode. We choked, suffocated and could not breathe. Could FO be one of the causes of pollution?

So, I asked: is FO being used in Delhi or in its vicinity? What is the quality of FO? Who uses it and for what? Suddenly, it seemed that the answers dried up. It was literally a black hole. What was clear was that way back in 1996, the Delhi Pollution Control Committee (the city’s pollution control agency) had notified a list of “acceptable fuels”. This did not include FO, but it did say that fuel with low sulphur—in those defined as 18,000 parts per million (ppm) of sulphur (today diesel has 50 ppm of sulphur)—could be used.

With efforts, the pieces trickled in. We learnt FO was indeed being sold in the National Capital Region (NCR); we tracked down consumers and tankers. The data showed that much more was being sold in the current year over even last year. All public sector oil companies sold FO; but only Reliance Industries sold it in Delhi. When we pushed, it was explained that the point of billing was Delhi. But the list of customers outside did not add up.

We finally tracked down the customers of oil companies. The list included the who’s who of companies—from large multinationals to clean energy firms. They used FO in their industry to generate power or in their furnaces simply because it was cheaper. The price of FO is deliberately kept lower than natural gas, its key substitute, which is much cleaner. Then FO is exempt from state taxes, but gas is heavily taxed. Worse, power is in surplus in this region; coal and gas plants are working at roughly 20 per cent of their capacity. But electricity supply is unreliable because of the mess in distribution and then its price is higher than the cheap FO. So, clean energy is available, but even as we cry hoarse about pollution, it is not being used. Is this not perverse policy?

During visits to industrial areas, we found there was yet another missing piece—pet coke. This is a byproduct of refineries, with high calorific value. So while being more expensive than coal, it is cheaper to use. But it is highly polluting. There are no specifications for this fuel and nobody has a clue where it is being consumed. It is also being dumped—China is imposing restraints on its domestic use because of pollution, so prices have crashed. Import data shows that this year, India has imported some 7 million tonnes in just 5 months, as against 10 million in 2015-16.

We collected samples of FO and pet coke and sent these for laboratory analysis. The results are truly shocking. The sulphur in FO was between 15,000 to 20,000 ppm; in pet coke, from 69,000 to 74,000 ppm. Just consider diesel has 50 ppm of sulphur and even with all the after-treatment devices in our cars, it continues to pollute. Coal burnt in power plants like Badarpur has 1,000 ppm of sulphur. The pollution potential of these fuels is obvious and deadly. The fact is there is also no control (no standards) on sulphur emissions, which is a gas, but gets converted into particulates with air-moisture interaction. The IIT-Kanpur study on Delhi’s air pollution estimated that 20-25 per cent of winter pollution was from secondary particles—sulphur and nitrogen dioxide.

So we need to do something about this, and we will. Our effort now is to do the following: notify the list of acceptable fuels that can be used, this time not just in Delhi, but in the entire NCR. This would ban the use of highly-polluting fuels like FO and pet coke. Simul-taneously, we must also control the unrestricted import of pet coke (it is best used only in cement manufacture, where pollution is controlled). And three, obviously, incentivise clean fuels.

But the most important learning is that we live in our airshed—rich or poor Delhi; in Delhi or near Delhi. In the mid-1990s, when Delhi banned its polluting fuels, banned even its industries, they simply moved to the areas bordering the city or into illegal areas in the city and continue to pollute. The other lesson is that policy has to stay ahead of “underground” developments. There is yet another missing puzzle, still missing. There are many other fuels (called everything from C9 to CBFS) that are still used, with no specification and no clearance. It just happens. This is why bad air happens. This is why we choke.