Conservation of lengths of forests, harbouring native animal and plant species, is a powerful concept that can involve people and attract funds 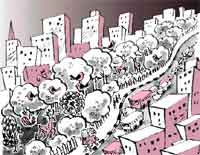 environmental campaigners have recently begun to pay as much attention to marketing as to science, having realised that a one-line idea can be as powerful as a dozen learned papers in gaining support for their cause. An example of imaginative use of marketing is the move to provide a green corridor for squirrels in Spain. The idea being sold is that the squirrels "need not touch the ground from the Bay of Biscay down to the Mediterranean". Such a conservation corridor is more appealing than a succession of isolated nature reserves, and setting it up challenges the ingenuity of people and local government in designing the links. 'The squirrel's super highway' has everything. It has visual appeal for children and it is a clear, simple idea for adults and politicians. Only time will tell whether it works.

But do squirrels need to cross Spain? Probably not, but an unbroken band of trees snaking across Spain's arid uplands and over the automobile routes and railways would be a fine symbol of environmental awareness and a boon for biodiversity. The names may vary but the idea remains the same -- greenways, landscape links, wildlife corridors, biohighways, all embody the idea and the image effectively.

The 'conservation corridor' is now becoming fashionable in many parts of the world. A new one focuses on the American panther as the favoured, symbolic creature. It is not sure that all panthers or even any panthers have a yearning to walk from South to North America, passing the Panama Canal. But it would be nice to think that they could without getting shot, run down or poisoned. They would use the central section, the Path of the Panther (" Paseo Pantera ") of a 'Conservation Corridor of the Americas' -- from Tierra del Feugo to the Bering Strait -- that has long been advocated by a World Conservation Union ( iucn ) staff member, Jim Thorsell.

The corridor concept grows out of studies in conservation biology that identified the problems besetting 'islands' of protected nature. The island shape of protected areas is most often due to the expansion of human-influenced landscapes which have gradually coalesced around them. An analogy is water thawing the ice on the sea, leaving even smaller floes that melt away at their edges. Often the protected islands left are of a size which, it is now realised, are too small to conserve the entirety of the original fauna and flora. Even small mammals may require square miles of territory and a bird like an eagle may need to be 10 miles from its nearest neighbour. The prospect of climate change makes matters worse, since the appropriate habitat may shrink due to reduced or less regular rainfall, catastrophes like storms and fires, and changed altitudinal zonation arising from raised average temperatures.

Mountains are often natural 'islands'. Many have been protected for centuries, particularly for royal hunting like the 'Gran Paradiso' in northern Italy. A large lowland heath on Britain, the New Forest, has been a protected island since William the Conqueror started it in the year 1079, and may hold some sort of a record.

Climate change has stimulated thinking about corridors, particularly mountain corridors, which theoretically permit biota to migrate both up the altitude zones as well as north and south across latitudes in pursuit of relatively cooler conditions over the next century. A north-south orientation is desirable but rainfall changes are also a likely consequence of climate warming. These indicate that even an east-west axis may have merits.

The concept is now gathering endorsements and support from iucn 's World Commission on Protected Areas. The concept has acquired a grander name -- the 'ecoregion corridor' -- and is now extended from mountains to include rivers, marine areas and forest zones. It is particularly strongly supported by those working on conserving biodiversity and responding to the threat of climate change.

India's Western Ghats are cited as a major prospect for linking existing protected areas, which extend over 2,000 sq km. Inaccessibility and religion have helped preserve many microcultures and original habitats in this region. A biodiversity conservation plan has been prepared and is published by the Indian National Trust for Art and Cultural Heritage.

Another large conservation corridor has been envisioned in Greece, linking Mt Olympus to Mt Pindus. The radical Mountain Wilderness Organisation has collected 60,000 signatures in a petition to the government to create 15 new national parks, several of which would be nodes in the proposed corridor. Greece will need to do something about its environmental reputation before the Olympic Games are held in Athens. Atmospheric pollution in the nation's capital is not only turning the Pantheon to gypsum, but may well affect the breathing of visiting athletes enough to reduce their performance.

Italian governmental support for the Abruzzo Appenine mountain protected area has been signalled by a postage stamp issued recently, which features the endemic Abruzzo chamois and the Mariscan Iris. With the president of Greece visiting the area, the prospects for the proposed 'Appenines Green Range of Europe' appear bright. Setting up the range would involve linking five existing national and regional parks, including the most southerly glacier in Europe on the Gran Sasso at an altitude of 2,921m, just east of Rome. Only seven relatively short connectivity zones are required.

In North America, the Wildlands Project has proposed a series of ambitious mountain corridors, now at the stage of design and implementation. One, in the Rockies, stretches from Yellowstone National Park right up to the Yukon river (44 n -60 n ), and another in southern Appalachia is about 560 km long.


"New" mountain conservation corridors are logged in a newsletter produced by Larry Hamilton on mountain protected areas for the iucn . As Hamilton says, "The potential for more mountain corridors is boundless if individuals, organisations and governments 'catch' the vision." Governments haven't "caught" much since the Rio Earth Summit in 1992. But then, gazetting a corridor or signing a treaty with your neighbours outlining things on a map requires planning measures over the years and modest initial investments. Such action would harness the participation of non-governmental organisations, attract volunteer effort and charitable funds and even some international aid.

It is hard to say who is most deserving of applause, the campaigners in old countries full of people occupying every bit of the land, like Italy and India, or the campaigners in the new world where the wilderness is full of modern exploiters like miners, lumbers, and road and dam builders with friends in high places.

The hard part comes when the connecting corridors are perceived to be less well protected than the core reserves and multiple use pressures mount from lumber interests and agriculturists or road builders. International partners may help to stiffen resistance to the pressure for unsustainable development. For example, the Mesoamerican Biotic Corridor, which extends through Belize, Costa Rica, El Salvador, Guatemala, Honduras, Nicaragua and Panama is incorporated in a 1994 treaty between seven governments (the Alliance for Sustainable Development) and is backed by the un Development Programme and the Global Environment Facility.

Another key biotype of which only a corridor is left is Brazil's Atlantic Forest, which has survived on the coastal escarpment. Although it is fragmented and narrow, a dozen conservation units form an almost complete assembly of 550 km stretching up the coast. Adjacent parks separated by national frontiers are also candidates for linking into bioregions of a shape which may be helpful in a time of climate change.

In the Sierra Nevada of Venezuela, the Spectacled Bear Habitat Corridor is a candidate for linking across the border to an entity in Colombia. There is an altitudinal corridor from 100 m in the Manas Tiger Reserve in India up into Bhutan to the snow line at 4,900 m. It is helpful that chains of mountains are common, providing a cue to conservationists. Many possible corridors in the European Alps are under discussion in seven countries. To help things along, the iucn has produced a policy discussion with illustrative case studies ('Transborder Protected Area Cooperation,' from the iucn 's Protected Areas Programme).

If the vision does 'catch', perhaps the image of protected areas melting away like ice floes might reverse, so that the floes might begin to grow again and stretch out to touch each other. We might live to see an expanding network of natural refuges surrounding human settlements in a sustainable green framework valued and maintained by a wiser mankind.

Peter B Stone is a well-known environmentalist based in UK.