While small irrigation projects are the need of the hour, the government is obsessed with big projects 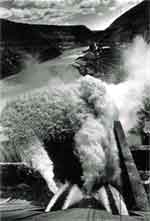 meaningful understanding of water resources development ( wrd ) has to begin with the analysis of the economic growth processes which affect it adversely. The growth model which we are pursuing is that of the North and the modernisation process associated with it.

Any serious discussion on the sustainable use of resources, such as water, has to unequivocally reject the ideology of industrialism. Without this, we can never re-orient resource use patterns. Today, this is the major challenge before humankind and more so, in a populous country like India.

The major conceptual cobweb which is hindering reform in the irrigation sector, is the stranglehold of the techno-engineering modus-operandi of irrigation as well as other water-use planners. In this compartmentalised methodology of project planning, there is excessive obsession with large surface storage. Water is not a commodity, as the Central Water Commission and most irrigation engineers and planners view it. It is a dynamic renewable resource and its renewability and effective availability hinges on its harmony with and holistic interdependence on land and vegetation.

The efficiency of the surface irrigation system is low; whether it is utilisation of the irrigation potential or productivity of irrigated crops, the over-all performance record is far from satisfactory. The gap between the potential created and utilised has been widening plan after plan. During the Seventh Plan the gap was as high as five million hectares (mha) - an area nearly equal to the potential created during the plan at a massive cost of Rs 15,000 crore. By the end of the Eighth Plan, the gap had mounted to nine mha. Again, this is almost equal to the irrigation potential created during the plan at a cost of nearly Rs 30,000 crore.

Here, it is necessary to expose the myth that the success and spread of the Green Revolution is the singular contribution of the large dams in the country. Factually speaking, even in Punjab and Haryana, the green revolution has been facilita-ted by the tubewells. Electrification and heavy subsidy on power to the farm sector has been a major factor in the great leap forward of the tubewell phenomenon.

It is often forgotten, more by choice and convenience by the irrigation lobby, that what happened in Punjab's agricultural growth is the result of many fortuitous circumstances and clustering of many factors; it is not possible to duplicate this elsewhere. Yet, the sugarcane and cash crop lobby in Maharashtra and Gujarat is clamouring for big irrigation projects. Interestingly, the industrial lobby has a vested interest in irrigation projects as it is a sure way to secure and divert water for industrial use, as has happened in a big way in Maharashtra.

The root cause of crisis in our irrigation sector is the conceptual flaw with respect to the form and size of water storage. Water is required the year round to sustain crops, vegetation and life, but the distribution of rainfall in India varies from region to region. Given this marked mismatch in the availabi-lity and requirement of water, there is certainly a need to store water. The question is: where can it be stored best, easily and at lower cost? In other words, what is the ecologically safe, socially just and economically cost-effective method of storing water?

Adequate water can be harvested through proper land use to sustain basic water needs on an assured basis through stream and river flows. If ecological balance is maintained, the historically established crops can be sustained on the annual and moisture-cycle of the region. Keeping this in view, farmers evolved crop rotation and mixed farming and learnt to maintain the fertility of the soil through the centuries.

All in all, the conservation and storage of water through grass, forage and vegetation cover and root system is most effective. Proper understanding of the relationship between forest and rivers, flora, fauna and total biomass productivity is the pre-condition for sound and sustainable wrd.