In 1929 when a British engineer identified the Silent Valley as among the best sites in Kerala for a hydropower project, he could not have imagined that 50 years later the valley would be at the centre of a controversy.

Tucked away in the Western Ghats, the valleys tropical evergreen forest has evolved over 50 million years and holds secrets about the evolution of plant and animal life. Its dark and brooding habitat lit by occasional pools of sunlight teems with wildlife including endangered species of tigers, nilgiri langurs, giant squirrels and lion-tailed macaq-ues. The dense vegetation hosts plants important for life-saving drugs, and wild relatives of spices such as pepper and cardamom form a genetic pool essential for the survival and development of their cropped varieties.

In 1973, the Kerala state electricity board wanted to construct a hydropower project on the Kunthipuzha river that cuts across the valley. Environmentalists woke up to the projects devastating effects on the valleys biodiversity when the Planning Commission had already cleared it. It still triggered off one of the fiercest environmental disputes the country has witnessed.

Green groups mounted an unprecedented campaign: initiated by the zoological club of Payyannur College in Kannur district, followed by the Kerala Sastra Sahitya Parishad, a peoples science movement. By 1979, the Save Silent Valley campaign had gained momentum. Groups such as iucn, wwf and Bombay Natural History Society made representations to the Central and state governments. 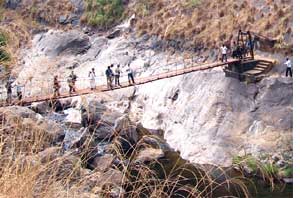 A case in the Kerala high court against the large-scale deforestation, though eventually lost, brought a stay order on the project work. Indira Gandhi, after she became the prime minister in 1980, asked the state to halt work until the ecological implications were studied. She appointed a committee headed by scientist and policy maker M G K Menon. The committees report, submitted in 1982, stated: The project would submerge 830 hectares of a genuinely intact riparian ecosystem and will result in loss in biological diversity.

The Centre accepted the report and directed the Kerala government to abandon the hydroelectric project. In November 1983 the project was shelved. A year later the valley was called a national park.

This year Kerala is celebrating the parks silver jubilee. The Silent Valley movement along with the roughly contemporary Chipko movement shifted equilibrium of debate over the environment. In the wake of its success, there were several comprehensive studies to conserve national parks and forests in Kerala. But they were not implemented in the right earnest.

Twenty five years after Silent Valley, Keralas environment is polluted like any other Indian landscape. In 2004, a proposal was mooted to set up another hydroelectricity project close to the core of the Silent Valley. It was shelved in face of resistance from environmentalists and scientists. But the message of the Silent Valley struggleit is possible to manage biodiversity hotspots scientifically has not been realized.

The Kerala government is yet to give full attention to the Menon report, which also recommended scientific management plan for the valleys biodiversity and devising a participatory process with the tribal people living in its vicinity to achieve the objectives of conservation.

M K Prasad, an environmentalist and educator, participated in the movement against the hydropower project in the Silent Valley