Annoying the US, our way

Despite close cooperation with American enforcement officials, US unhappy with India’s report card 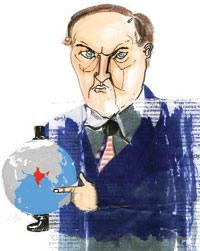 America, the global police of all things large and grand such as human rights and democratic values the world over—leaving aside, of course, powerful oil kingdoms with barbaric laws and Latin American dictators who make huge chunks of their restive population “disappear”—also does a tough cop act on intellectual property rights (IPRs) and how well such rights are being protected. Its annual review of how well IPRs are being enforced could be termed fairer than its selective assessment of the way democracy is functioning in different parts of the world simply because its scrutiny covers the big and small alike, included are rich countries such as Switzerland, large economies (China and Russia) and the tiny ones like the Bahamas, Barbados, Jamaica and Trinidad and Tobago–—all little specks in the Caribbean.

But let us not get carried away. The Special 301 Report, released annually by the Office of the US Trade Representative (USTR) is only as fair, or as relevant, as its industry wants it to be. The industries, which have an absorbing interest in intellectual property (IP) related matters, are primarily pharma, software, music recording companies and Hollywood. India has been on the USTR’s “priority watch” list since 2007.

This year’s report assessed 77 countries and placed India and 12 others on the priority list, signifying the highest concern. The others on the honours roll are Algeria, Argentina, Canada, Chile, China, Indonesia, Israel, Pakistan, Russia, Thailand, Ukraine, and Venezuela while another 27 countries figure in the less sinister “watch” list. What does this mean? Being put on such lists could result in sanctions against a country, but quite often some take remedial action.

India is an interesting case. Given the IP mania fomented in this country by officials of the US Patent Office posted in the New Delhi embassy and by visiting experts it does seem odd that India has not fallen in line with the US notions of copyright and patent propriety. Specially since the apex trade organisations, FICCI and CII, have mounted a relentless campaign on such matters. From hosting a steady stream of events, instituting awards, promoting courses and going so far as to “sensitise” judges, these lobby groups have done their best to put IP, specially patenting, at the heart of the debate.

And yet, India seems to have fallen woefully short of US expectations. Did India’s intransigence or inability to follow the standards set by the Americans and the World Intellectual Property Organisation have repercussions for its large trading partner? Here’s what US Trade Representative Ron Kirk has to say: “This year’s Special 301 Report is more significant than ever in light of recent US Government data showing that IP intensive industries support as many as 40 million American jobs and up to 60 per cent of US exports. When trading partners don’t protect IPR, they threaten those critical jobs and exports.” But then that’s the usual US refrain.

What is interesting for Indians is what the report reveals about the doings of their government. India, it turns out, has been cooperating more closely with the US authorities than is generally known. The Department of Homeland Security’s Bureau of Customs and Border Protection (CBP) has been conducting training programmes that focus on IPR enforcement in India. The Department of State provides funds to its agencies annually to provide IPR enforcement training and technical assistance to foreign governments. So Indian customs, police and judicial officials have been getting training from such bodies as the Department of Justice, United States Patent and Trademark Office, CBP and Immigration and Customs Enforcement. The last named organisation has been notorious for shutting down websites accused of indulging in copyright and patent violations.

But the fundamental question that this column has been raising for several years remains even more pertinent today than in the past: how appropriate is it for Indian officials to be trained in the US where the approach, the philosophy of IPR is quite different from that in India? Readers need no reminder that India’s laws have stricter norms that preclude patents for trivial improvements in a product or a process. That safeguard is being contested by US and European pharma giants who view it as a barrier to their monopolistic profiteering.

The US concerns in the 2011 report relate to inefficient streamlining of patent opposition proceedings and an “ineffective system of protection against unfair commercial use, as well as unauthorised disclosure of test or other data generated”.

It has, therefore, urged India to take additional steps to improve coordination with enforcement officials of certain state governments, address its judicial inefficiencies and strengthen criminal enforcement by imposing deterrent punishment and giving IPR prosecutions priority. Is India ready to heed the whistle of the global cop?