Another plague in the offing 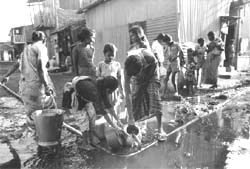 The rash of leptospirosis cases in Mumbai during the current monsoon points towards the gradual breakdown of health services in burgeoning metropolises Another monsoon has crossed Mumbai coast and a second round of leptospirosis among other water-borne diseases has taken its toll. The epidemic has claimed around 40 lives so far. The figure last year touched 27. And this puts a big question mark over the efficiency of our health services in handling outbreak of diseases during the rainy season.

In August last year and again in June this year, when leptospirosis deaths were reported from Mumbai, the civic authorities embarked on a feverish rat hunt armed with rat-traps and specialised rat-catchers. The health department formed crack squads comprising doctors and other health officials to carry out house to house checks in areas where cases of leptospirosis had been detected.

Leptospirosis, like cholera, is a disease of the poor and the marginalised. It is a febrile illness caused by infection due to Leptospira interrogans , that results from contact with the urine of infected animals, mainly rodents. The people at risk are those who live in shanties and around sewage contaminated waters. In Mumbai, since most slums are illegal, the Brihan Mumbai Municipal Corporation (bmc) provides them with limited services but no formal access to clean water, sanitation and health service.

A few patients with leptospirosis normally pass undetected during the initial stages of the epidemic. Once normal drugs, like anti-malarial, fail and the first few deaths occur, doctors panic and approach public health department who in turn approach specialist organisations. Each year, morgues are visited, samples from cadavers collected and serotypes matched and then stocked into repositories. Nothing actually happens with respect to surveillance, education, training and monitoring of the disease. For example, by the time official confirmation of the blood picture from the National Institute of Virology (niv), Pune, and the pathological reports from the state government's Haffkine Institute were released, the epidemic had blown over last year.

The first step to surveillance is to educate all medical practitioners about the disease prior to its outbreak. The disease is often confused with others like jaundice, malaria, or when terribly confounded by it, simply termed as a 'fever of unknown origin'.

The conservancy departments of the bmc and other civic bodies are responsible for tackling the population of stray dogs and rodents. As a first step, the state government and the bmc have decided to approach the Bombay high court to restart killing of stray dogs in the city. The high court had banned the killing of stray dogs in October 1998 in response to a petition filed by animal lovers from the city. The bmc is also in touch with the Indian Leptospirosis Society based in Port Blair for more information about combating the disease.

bmc is clearly not a cash starved municipality, but has been short-sighted in its dealing with public health crises. It has no outreach programme to the public and also has no network with ngos, doctors and private hospitals for establishing a surveillance network. Even within the municipal hospitals there is little coordination. In the event of an epidemic, local resources collapse under the pressure to meet the public demand and hence 'experts' are called in from all corners of the country. Surely age-old institutes have the capacity to identify a microbe.

What prevents a quick identification of the microbe? What prevents the bmc from reaching out in identifying new partners? National Institute of Communicable Diseases (nicd) and the Indian Council for Medical Research (icmr) do not have the vision to create protocols of disease management in India. nicd has proposed a basic protocol for the management of leptospirosis and a more general National Disease Surveillance Programme in India. But no agency in India has actually created a functional body, agency or imparted responsibility to anyone at any level. It is pure and simple common sense that the cost to prevent the outbreak of a disease is much less than the cost to control it.

Mumbai is fortunate that a Surat-like epidemic has not occurred. Of course, leptospirosis is limited in its reach because it is not contagious. In 1994, amidst the plague epidemic of Surat panic struck and people fled with the fear of the contagion spreading. For this, the Surat municipality and its public health system were entirely responsible. In the case of leptospirosis in Mumbai there was no fear of contagion spreading with contact. It is quite important to identify why Mumbai public hospitals are not able to diagnose, identify and control an epidemic of this magnitude.