Any cheers for Doha pact?

The Doha Declaration on protecting public health is a decade old, but developing countries have not been able to make use of TRIPs flexibilities 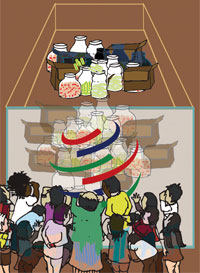 Last month, the chiefs of the big three Ws, the World Trade Organization (WTO), the World Health Organization (WHO) and the World Intellectual Property Organization (WIPO), met in Geneva to mark—one is reluctant to use the word celebrate—a special anniversary. Ten years ago, on November 14, 2001, developing countries had wrested a historic agreement at the fourth ministerial session of WTO in Doha. The Declaration on the Agreement on Trade Related Aspects of Intellectual Property Rights (TRIPs) and Public Health adopted in the Qatari capital was a political milestone as it marked the first time developing countries were able to wrest a concession in global trade negotiations.

The Doha Declaration reaffirmed the right of WTO members to make use of public health-related flexibilities in the TRIPs Agreement without subverting IPRs of drug companies. In sum, it was intended to help promote access to medicines for all by reinforcing the flexibilities in TRIPs.

To mark this anniversary events have been held to draw up a balance sheet on the Declaration. Has it been success? Should developing countries be cheering? Or has it remained a paper victory? But first a little background.

Although the flexibilities on public health issues were clearly enshrined in the TRIPs agreement, any attempt to make use of these was challenged by multinational pharmaceutical companies. In 2000 when the country brought in legislation to make use of these flexibilities, 39 such companies took the South African government to court. But following public protests and an international campaign by health activists, the companies backed off. The issue was then brought before WTO in June 2001 by African countries, setting off the negotiations that resulted in the Doha Declaration.

This was the first and only amendment to WTO rules and was agreed to with much fanfare at the subsequent ministerial in Hong Kong in 2005. But unaccountably, even six years later this has not been ratified by members. With a membership of 153, at least 102 countries or two-thirds of the members need to ratify the change in rules to make it effective. So far less than 40 have ratified the change and the deadline has been moved to December 2013.

But this fact was glossed over as the heads of WTO, WHO and WIPO met to mark the anniversary and made celebratory remarks. While WHO chief Margaret Chan claimed that access to medicines has improved tremendously in the first decade of this century, Pascal Lamy, director general of WTO, said that the Doha Declaration was a political turning point in the way public health is governed globally. But not everyone was swallowing such platitudinous remarks.

Tido von Schoen-Angerer of humanitarian health organisation, Médecins sans Frontières (MSF), for one finds the decade since the landmark declaration was adopted had exposed the double standards and hypocrisy of the developed nations on public health concerns. Schoen-Angerer, who is executive director of MSF’s access to essential medicines campaign, points out that whenever developing countries have tried to use these public health flexibilities to protect their citizens, developed countries have exerted massive pressure to stop them from doing so. A glaring example of this occurred in 2007 when Thailand issued a compulsory licence for a drug to treat its citizens living with HIV-AIDS. Not only did the US put the Southeast Asian nation on a trade watch list, but the US drug MNC involved retaliated by withdrawing new patent applications from the market. The most egregious example is India which has been facing several and persistent legal challenges to its wellconsidered and balanced patent law.

Looking back at the last 10 years, it does turn out that the hope and promise of the Doha Declaration have not been fulfilled. Apart from the clout that developed countries are employing to deter the use of TRIPs flexibilities, they are also imposing stiff IPR protection measures in bilateral and plurilateral trade agreements signed with developing states. But to quite a large extent, the developing countries are themselves to blame. They have for the most part failed to enact enabling national legislation to make use of the flexibilities. This, according to a report prepared by the South Centre, an inter-governmental think tank, is a key challenge.

Time is running out even for the least developed countries (LDCs), which have made no attempt to make full use of the transition period they enjoy before enacting patent laws that bring them in line with policies of the rich world. The grace period ends in 2016. “In the absence of generic competition, the poorest countries are relying on voluntary discounts from companies that go nowhere near far enough and leave millions without access to vital, lifesaving drugs,” warns Schoen-Angerer.

Should we then be celebrating the 10th anniversary of the Doha Declaration?