Around three years ago, I got an opportunity to meet Chandi Prasad Bhat. He was lecturing on how poor villagers in Uttaranchal hugged trees and prevented them from being cut down. The lecture on the Chipko movement got me thinking on environmental activism in my home state, West Bengal.

Environmental activism doesn't mean merely raising a debate in the media. But that's what a lot of people, claiming to be environmental activists, do. Their pursuits, however well-meaning, are rendered futile by the inability to tackle problems at the grassroots level. Besides, environmental activism needs expert guidance. A number of movements have been nipped in the bud because they have not taken a proper approach: an issue has been raised in the public domain, it has generated heat, but then the matter has fizzled out.In Kolkata, for example, there have been many debates to protect the city's water bodies from the urban sprawl, but not a single blue patch has been saved.
A case in point is the gradual loss of Bikramgarh Jheel. The around 14-hectare lake in South Kolkata is being encroached by influential promoters and businessmen to construct the South City housing complex. The lake is important to local residents for several reasons. It is important in recharging the depleting groundwater levels of the area, and is also home to an amazing array of biodiversity. In a brief study in 2004, this author found about 32 kinds of flora (both aquatic and terrestrial), varied fauna and 22 kinds of birds in this lake. A petition was filed against the encroachments of the lake in the Calcutta High Court, about a year and half back. It is still pending, while the West Bengal Chief Minister has inaugurated the housing complex. So why file a petition on such a sensitive issue if it's not followed up properly?

This author tried contacting the media on the issue. But was told that it's an old issue, and needed no further pursuing. One media representative told me that any further coverage of the issue would result in loss of advertisement revenue from the Emami group--one of the important shareholders of the South City complex.

I did manage to find some print space in a leading Kolkata daily. But all mention about corruption and illegality had been cleverly edited and the story seemed like a nostalgic requiem to a lost lake. But I do not want to rant against the media. My aim in bringing up this personal experience was to highlight the futility of conducting environmental activism through the media. 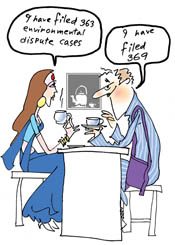 The media response to the Bikramgarh Jheel issue is also symptomatic of another malaise: the environment is a much-trivialised matter. For, almost everyone can claim to be an 'environmentalist'. Environment is an easy catch to get people into media limelight. Never mind that this involves attenuation of absurd levels.

Kaustuv Basu is a research student at the School of Environmental Sciences in Jawaharlal Nehru University, Delhi