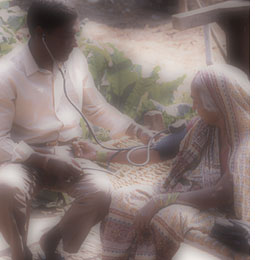 Doctors in 12 states went on strike in the first week of December protesting mandatory rural posting. The Union Ministry of Health and Family Welfare came up with the proposal in July. A Ramadoss, the health minister, had said then that undergraduate medical students would need to take up rural posting for a year--four months each in a primary health centre, a community health centre and a district hospital--failing which they wouldn't be given their mbbs degree. It was also outlined that the doctors would get a stipend of Rs 8,000-10,000 a month. While a final decision on the proposal is awaited, a debate has started on whether we are asking for too much from doctors.

The health minister's reasoning behind the proposal is since medical education is heavily subsidized in India, students have an obligation to serve society in the form of a year's service in rural areas--a much-neglected sector.A medical student currently pays around Rs 15,000 per year as fee, against Rs 350,000 spent on them. Besides, according to the health ministry, the country has 767,500 registered allopathic doctors, which works out to 70 doctors for every 100,000 people. But this statistic hides a huge gulf between rural and urban areas. In the urban sector, there are 176 doctors for every 100,000 people. In the rural sector, the figure is an abysmal less than eight doctors for every 100,000 people scattered over large areas. And every year around 31,000 doctors graduate from 269 private and government medical colleges in India.

According to Ramadoss, the dichotomy between urban and rural areas becomes even more pronounced considering only one in every 10 doctors works in rural areas. The 2001 census showed that although rural areas had 72 per cent of the country's population, there was not a single medical college in such areas.

Rural posting can hardly be touted as a new concept. "Typically, the five-and-a-half-year mbbs course includes a three-and-a-half month rural deployment. Some states make students sign bonds before admissions stating they will work for a specific period in villages. In Haryana, seats at the post-graduation level are reserved for students who have completed three years of rural service," says Davinder Kumar, deputy secretary of the Medical Council of India. "However, since education is a state subject, each state had different rules," he adds.

According to Jacob M Puliyel, senior paediatrician at the St Stephens Hospital in New Delhi, bonds haven't worked either due to paucity of jobs or students refusing to go for such postings. "I wanted to work in villages but the government let me off the bond saying they did not have any openings," says Puliyel.

Medical professionals are divided over whether sending medical students to work in villages will help bridge the medical care divide between the urban and the rural areas.

Puliyel says the health ministry's scheme will definitely help. "There is no moral reason why the students should not go to rural areas. It will only help them discipline themselves in the profession," he says. Puliyel further asserts that doctors should be allowed admissions in post-graduate courses only after they have completed working in rural areas.

Narender Saini, joint secretary, Indian Medical Association, believes private hospitals should be given subsidies. Saini says if the government decides to improve rural health infrastructure, the need for sending students would become redundant because senior doctors would then start moving to such areas. "Cities are reaching a saturation point because there are many doctors."

Gopal Dabade, co-convener, All India Drug Network, does not agree. He says putting rural healthcare in the hands of private operators will lead to accountability issues.

The subject, he says, should be tackled by the state and the money from taxes should be spent for both education and healthcare. "We have already seen privatization of some public health centres in Karnataka. Every time a patient needs a test, he or she is sent to the hospital run by the private firm." Instead, Dabade says, the government should first concentrate on improving infrastructure, providing adequate drugs and increasing their budgets before starting to think of sending students out to work in rural areas.