By Rajat Panwar And Eric Hansen 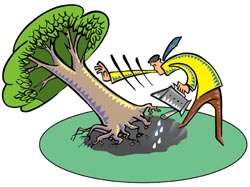 Corporate social responsibility (csr) is a theme that engages business, academics, social and environmental activism, politics and media. It has gained increased prominence of late, driven, by a globalising economy, the spread of it, and increasing awareness and social and environmental inequities. The debate is especially relevant in countries like India with high growth but weak regulation.

There are differing conceptualisations of csr, yet a commonly agreed upon understanding suggests companies should be responsive to social and environmental issues. Multilateral bodies have tied csr to sustainable development suggesting companies should contribute to securing sustainable development. Many advocate global standards. However, global think tanks argue that a context-specific approach is more feasible and farther reaching.

The question then is Is India ready for such a contribution?

We recently conducted csr-related interviews in Washington dc, and Delhi, asking experts in government and ngos for their views on csr in the forest industry. We found extreme contrasts in perceptions. Non-compliance with socio-environmental regulations emerged as an issue in India, whereas in the us, issues like the increased need for recycling and biorefinery initiatives were dominant. An Indian paper manufacturer reflected old economic thinking, saying no social activity was possible without at least 25 per cent profitability. Such views give rise to the question whether many industry players are even aware of the concept of csr?

Industry hesitation is understandable in an emerging economy yet, surprisingly, many of our interviewees reflected just the basics of csr. Most responses were wrapped in broad, commonly understood, "nice to talk about" themes. A retired economics professor told us csr "doesn't mean anything unless tied to customer satisfaction".

Findings from the research and the experiences mentioned above suggest that there is much room for the engagement with csr to develop, though the voluntary sector is engaged. The Worldwide Fund for Nature-India touched on some issues in its recent report titled 'Indian Companies in 21st Century'. However, it fails to provide an objective assessment of Indian companies. What is needed is a more academic and systematic approach to thinking of, communicating about and implementing csr, to which there is resistance.

A conservative economist said in a discussion last year that csr was just another non-tariff barrier that the west wants to impose to curb Indian exports. Such economists appear to be protecting India's international trade yet they may be failing to account for societal developments and expectations. There are global examples of csr being embraced for the common good. For example, the uk government now has a minister for csr and has contracted Al Gore as a consultant on environmental issues. The basis of such efforts is rooted in forecasts that environmental issues will cost the global economy more money during coming decades than the Great Depression of the 1930s cost the us. While the world is preparing to combat the challenges posed by irresponsible business behaviour, conservative comments could indicate either a myopic worldview or strategic denial to protect self-serving interests.

Fortunately, most people are interested in the business sense of csr. They could be told that it could save disadvantaged groups from social crises, everyone from environmental disaster and the business community from economic depression. Our economy does not operate in a vacuum.

There are three areas that could improve csr in India. First, it must become a matter of universal concern. Grassroots organisations may be most effective in educating the masses, but csr should also be included as a full credit, mandatory course in business and technical curriculums. Indian managers can be more competitive through appropriate training and knowledge. The Wall Street Journal has documented rising demand for mbas trained in csr.

Second, premier institutes of management, and social science and environmental research should research all areas of csr.In a country where a mixed economic model is leaning toward a capitalistic model, it is appropriate for industries to engage with public policy.

Third, collaborative development of standards is needed. And finally, if we are to maintain a liveable planet while economies like India grows rapidly, a new approach is needed. Globalisation has shifted power from the state towards global firms. They have to embrace a new role. India, too, has to acknowledge csr for its future well-being.

Rajat Panwar and Eric Hansen are with the Forest Business Solutions team in the College of Forestry at Oregon State University, Corvallis, USA