After showing a full horror film of what it can do in Char Dham Yatra last year, weather gives a fresh trailer at Badrinath by featuring a cloudburst near Chamoli district on Wednesday

After showing a full horror film of what it can do in Char Dham Yatra last year, weather gives a fresh trailer at Badrinath by featuring a cloudburst near Chamoli district on Wednesday 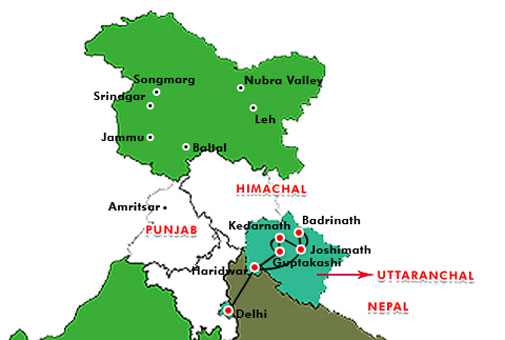 It's been just one year since the 2013 Uttarakhand Disaster but indeed it seems that no big lessons have been learnt by the authorities. Over 5,700 people were presumed dead in one of India’s worst disasters last June, which could have been averted had the weather warnings been more clear and properly  disseminated. During last year’s disaster, even the state government of Uttaranchal didn’t take much interest in the early warnings given by the India Meteorological Department (IMD) of “heavy rains” and “very heavy rains” in the state. A combination of violation of environment norms by the increasing dam projects, illegal constructions in the temple areas,bad weather warnings, no timely actions by the government and poor dissemination of the information was responsible for this disaster.

It seems that only minor lessons were learnt from this disaster. IMD on their website started a page last year specially dedicated to the Chardham Yatra and Hemkund Sahib, which provides 7-days' weather forecasts, and a link to weather satellite images in that area. Additionally, it was heard that weather updates would be given by SMS to the travellers well in advance. However, the terminologies used in the weather warnings aren’t still clear and are ambiguous. The satellite images aren’t of high resolution, making it difficult to understand the clouds.

Weather plays a very important role at any pilgrim/tourist place where there is a large gathering of people. Especially in hilly terrains like Char Dham, it must be taken on a priority and must play an important role in the planning of yatras and one must not make a compromise with it. But it is still being neglected in the Char Dham yatra which became clear during the recent disruption of Badrinath yatra. 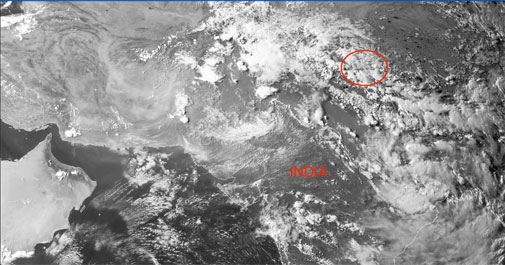 Sometime during the evening/night hours of July 2, a cloudburst allegedly took place near the Badrinath temple in Chamoli district of Uttarakhand. Rainfall was being reported in this area as the SW Monsoon was active and was progressing in these areas. The alleged cloudburst triggered heavy rains during early morning hours of July 3. Lambagar is a small village in the Chamoli district about 5km from the Badrinath temple on the National Highway 58, which connects Badrinath, Rishikesh and Joshimath to other places like New Delhi. As per news reports, a 20m stretch of the road near Lambagar was washed away due to the cloudburst and some 400 tourists were stranded at Badrinath and Joshimath. Two personnels of the Border Roads Organisation (BRO) were killed in Joshimath area because of landslides. However, on Thursday afternoon, the road was repaired and the yatra resumed.

As all this happened during the late night/early morning hours, it's likely that due to lesser vehicular movement on the road lives of many pilgrims were saved. Heavy rains (posing a risk to Char Dham and Amarnath yatra) were likely till July 3-4, as per the Global Forecast System (GFS) weather models as analysed on Sunday, June 29. GFS weather models are operated by National Centres for Environmental Prediction (NCEP) of USA which show the latest atmospheric conditions for various parts of the world, including India. Known for their better performance and accuracy, the precipitation (rainfall) model of GFS for Central Asia had indicated heavy rains. But no weather advisory of suspension of the Amarnath and Char Dham (Badrinath) yatra was issued by IMD or the government of Uttaranchal in advance. As per the news reports, even the Uttaranchal government became active only after the incident took place on Thursday when it alerted its officials to take precautions to avert such incidences ahead on the Char Dham yatra route. 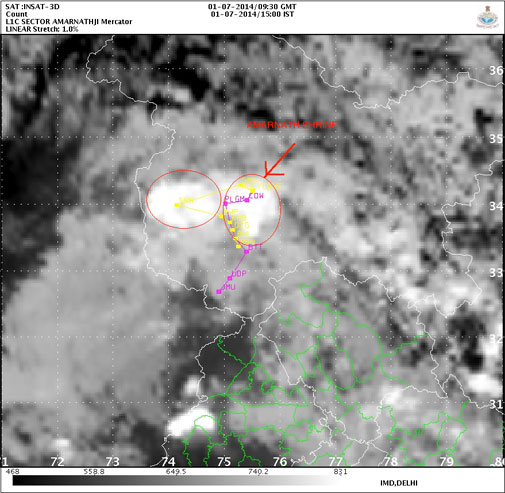 The satellite image via IMD as attached here is of 3PM IST on July 1, showing two thunder clouds (encircled red) heading towards Amarnath shrine (shown by a red arrow). Such thunderstorms can be dangerous for pilgrimage in hilly places like Amarnath and when they are in the forecast, yatra must be stopped well in advance to avert mishap.

Cloudbursts, how dangerous are they?
Cloudbursts are “Fast Food” way of getting large amount of rainfall in a relatively lesser time in a short area on the Earth (rainfall rate equal to or greater than 100mm in one hour). When the conditions are favourable, air carrying moisture rises vertically above the ground and as the temperature cools down above, the moisture-water vapour condenses in clouds. This rising of air is the process due to which an updraft of a thunderstorm is created. Most of the times due to the hilly terrain, this updraft is no longer supported (as the rising motion of air gets cut-off) and the resultant vertically downward motion (called as the downdraft) takes over in the form of sudden heavy rains and hails/lightning also at times. Including theAugust 2010 Cloudburst in Leh  many deadly cloudbursts have been reported in India and their frequencies are higher in the hilly areas during monsoon. Apart from short-timed heavy rains, these cloudbursts trigger flash floods in the rivers and trigger landslides also which can be dangerous for any pilgrimage like the one to Badrinath.

Cloudbursts can’t be detected using satellite images only just like we can in the case of a cyclone. Only a doppler radar gives some insight of what's going on inside a thunder cloud. But there aren’t doppler radars in the Char Dham or Amarnath yatra routes, hence continuing the yatras is very very risky when the weather model shows a heavy rainfall event. Instead of temporarily suspending the yatras, they are continued and a big risk is taken, EVEN TODAY!

It was the luck of the pilgrims at Badrinath and Amarnath which saved them this time but we can’t take a second chance when it comes to severe weather.